The connection between the Sun and the Northern Lights

Pål Brekke giving a lecture at the Smithsonian Institution earlier this year. He will lecture at PLU on Thursday at noon about the connection between the Sun and the Northern Lights. Photo: Hanna Pincus Gjertsen 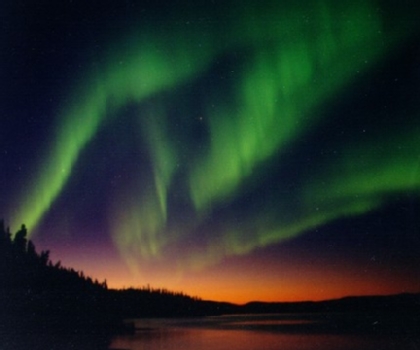 Photograph by Bjorn Anders Nymoen, An aurora over Nesoddtangen, Norway, billows out into the distance on October 9.

At a presentation this year at the Smithsonian Institution, Brekke told a packed auditorium about the early pioneers of Aurora Borealis science. He also told the crowd that to understand the Northern Lights, one must first understand the sun, as Brekke is first and foremost a solar physicist. He told that crowd to try and see the northern lights in the next four years, as he suspects that some of the displays will be the most spectacular in decades.

Brekke received a doctorate degree in 1993 from the Institute of Theoretical Astrophysics, University of Oslo with focus on the ultraviolet (UV) emissions from the Sun observed with instruments on sounding rockets and the space shuttle Challenger.

His work focused on dynamical aspects of the Sun and measuring variations in solar UV radiation. Since 1993 he participated in the Norwegian involvement’s in preparing the EUV spectrometers CDS and SUMER on Solar and Heliospheric Observatory (SOHO) and was in charge of developing analysis software for CDS. After the launch of SOHO in December 1995 he was part of the science operation team at NASA Goddard Space Flight Center.

In 1999 he joined the European Space Agency (ESA) as the SOHO Deputy Project Scientist stationed at NASA/Goddard Space Flight Center. He was also in charge of outreach and media activities, making SOHO to one of the most well known current satellite projects. He is now a Senior Advisor at the Norwegian Space Centre. He is a Norwegian delegate to the ESA Programme Board of Human Spaceflight, Microgravity and Exploration and a delegate to the International Living With a Star

He received a Fulbright Fellowship in 1994, ESA´s Exceptional Achievement Award in 2002, Laurels for Team Achievements from the International Academy of Astronautics in 2003. Served on several NASA Review Panels and as referee for various scientific journals.