From King Tut to the Mysterious Undecorated Tombs of Ancient Egypt

From King Tut to the Mysterious Undecorated Tombs of Ancient Egypt

If you ever wanted to see the King Tut exhibit, now may be your only chance. Seattle is the last stop for the exhibit before you’ll have to make the 6,800 mile trip to Egypt to see the most well known discovery of ancient Egyptian history.

Open to the public seven days a week, the “Tutankhamun: The Golden King and The Great Pharaohs” exhibit runs through January 6, 2013 at the Pacific Science Center in Seattle.

“This is a rare opportunity to have these kinds of objects in Seattle,” said archaeologist Donald P. Ryan, director of the Pacific Lutheran University Valley of the Kings Expedition.

It’s been more than 30 years since Seattle has seen the wonders of the King Tut exhibit, and the current North American tour showcases twice as many artifacts as before, many of which have never been seen before in the United States. 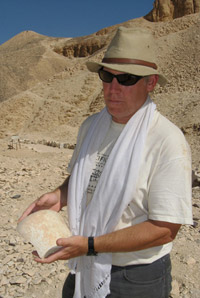 During a dig in Egypt’s Valley of the Kings, Don Ryan uncovered the mummy of 18th Dynasty female pharaoh, Hatshepsut.

The exhibit features over 100 fascinating artifacts from the tomb of King Tutankhamun and other sites related to prominent ancient Egyptian rulers spanning more than 2,000 years of history.

“It is the archeological discovery of which all other discoveries are still compared, even 90 years later,” Ryan said.

The work of Dr. Nicholas Reeves, Egyptologist at the Metropolitan Museum of Art and the world’s foremost expert on King Tut, has shed some light on the many mysteries that surround this famous royal tomb.

Named king at the young age of 10, the elaborately decorated tomb of this 18th Dynasty (c.1550-1300 B.C.) ruler holds more mysteries than answers.

“It’s a lot of connecting the dots,” explained Reeves. He compared the study to “trying to write modern history based on a couple shopping lists and a couple pages torn out of a phone directory.”

Based on accepted knowledge of royal burials during this time in the Valley of the Kings, King Tut’s tomb was only a fraction of the size it should be for a pharaoh and many of the artifacts, including the famous golden mask, held characteristics often reserved for queens.

“Most of this tomb looks to be originally made for someone else,” Reeves explained.

In fact, Reeves discovered that many of the artifacts buried with King Tut for his journey into the afterlife were never intended for him.

It is likely that the king’s unexpected demise forced the royal court to repurpose leftover burial items intended for Queen Nefertiti and others. Nefertiti was the wife of Pharaoh Akhenaten, Tutankhamen’s father.

“It raises anew the suspicions that I have held for some time, that there is still much to play for in the Valley of the Kings,” Reeves said.

Ryan, a Faculty Fellow in the Humanities at PLU, has focused his research on a less publicized aspect of the Valley of the Kings.

Many hidden, undecorated tombs spread throughout the Valley of the Kings have been overshadowed by the glory of the celebrated royal tombs and remain untouched by most archeologists.

Because of the lack inscriptions and burial treasure, very little is known about the mummies that lay within these undecorated tombs.

“Those were the tombs that fascinated me,” said Ryan. “The fact that they were in the Valley of the Kings means they must belong to very important people.”

In less than half an hour on Ryan’s first day in the Valley of the Kings in 1989, he and his team discovered the entrance to a lost tomb rumored to hold the mummy of 18th Dynasty female pharaoh, Hatshepsut. Her left arm was bent with a clenched fist and her right arm was straight against her side; a burial pose which some believe to be indicative of royal females of that time period.

“We’re finding what appears to be the burial of royal females in the Valley of the Kings,” said Ryan. “All the royal families are buried somewhere.”

So far with PLU, Ryan has excavated a total of seven undecorated tombs in the Valley of the Kings. He will be returning to Egypt in Spring 2013 to resume cataloging the artifacts.

“It just goes to show, ” Ryan said, “that even many decades after a great discovery like that of the tomb of Tutankhamun, there is still a lot to discover and learn in a place like the Valley of the Kings.”