A report from the Kurt Mayer Chair of Holocaust Studies

Chair’s report on scholarships and activities

Bob Ericksen received several notable invitations this year, including an opportunity to give the annual Raul Hilberg Memorial Lecture at the University of Vermont. Hilberg spent his entire career at this university, becoming the father of Holocaust Studies with his groundbreaking book, The Destruction of the European Jews (1961). Erickson arrived in Vermont the weekend before his Monday, Oct. 29 lecture. 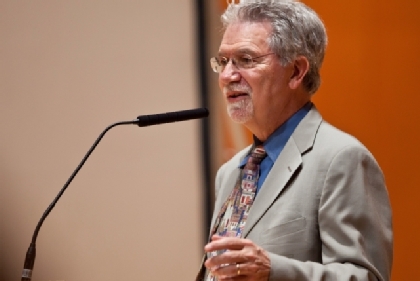 Bob Ericksen, Kurt Mayer Chair of Holocaust Studies, at Pacific Lutheran University. (Photo by John Froschauer)
He and his host then nervously watched news reports as Hurricane Sandy headed up the coast. The hurricane arrived on the same evening as the lecture, meaning that the campus was closed and the lecture had to be canceled. This lecture, “German Churches and the Holocaust: Assessing the Argument for Complicity,” now rescheduled for April 22, will then be published as an “occasional paper” by the Center for Holocaust Studies at the University of Vermont. Ericksen also was invited by the Kaplan Center for Jewish Studies to speak at the University of Cape Town in August. He and his PLU predecessor, Chris Browning, were there. Susannah Heschel, Doris Bergen, and Michael Marrus – all former speakers at PLU Holocaust Studies events–were also among the nine scholars asked to speak on “Personal Trajectories and Professional Interpretations” in Holocaust scholarship. These talks, intended to be published as a collection of essays, allowed each speaker to review his or her own place in the field. Bob spoke on “Pastors and Professors: Assessing Complicity and Unfolding Complexity,” drawing upon his recent book, Complicity in the Holocaust: Churches and Universities in Nazi Germany (Cambridge, 2012).

Ericksen’s connections with the U.S. Holocaust Memorial Museum in Washington, DC continued in 2012. He is Chair of the Committee on Ethics, Religion and the Holocaust at the Museum (formerly the Church Relations Committee). In June, Ericksen spent time at the Museum, working with Dr. Victoria Barnett, Director of the Museum’s program on Ethics, Religion and the Holocaust. Together, they led a one-week workshop for university teachers (from places like Emory, Notre Dame, and St. Olaf College) on “Understanding Complicity: The Churches’ Role in Nazi Germany.”  This workshop used Ericksen’s book, Complicity in the Holocaust, as a primary text. While in DC, Ericksen also recorded a lecture on churches in Nazi Germany now available on the museum’s website.

In April, Ericksen spoke at the University of Minnesota on the topic of “Göttingen: A ‘Political University’ in the Mirror of Denazification,” and presented at the conference, “Betrayal of the Humanities: The University during the Third Reich.” This conference will result in a book of the same title. Ericksen was invited by the host, Professor Bernard Levinson, to co-edit that volume.

Other talks Ericksen gave in 2012 include:
•    “Das Verständnis von Religionsfreiheit in den USA,” in the lecture series, “Die Religionsfreiheit und das Staat-Kirche-Verhältnis in Europa und den USA,” Technische Universität Dresden (Jan. 16, 2012, to be published in 2013).
•    “Antisemitism through the Lens of Denazification: Examples from Göttingen University,” presented at the German Studies Association meeting (Oct. 4-7, 2012).
•    “Antisemitism under the Faulty Gaze of Postwar Germans: The Denazification of Klaus-Wilhelm Rath,” presented at the Lessons & Legacies Holocaust Conference (Nov. 1-4, 2012).

These activities have benefited tremendously from research and travel support provided by Ericksen’s position as the  Kurt Mayer Chair in Holocaust Studies. Among other things, this support allowed research in Berlin during most of June and July. Ericksen also had a chance in June to attend a 25th anniversary celebration in Göttingen of a book on the history of Göttingen University, Die Universität Göttingen unter dem Nationalsozialismus (Munich, 1987, 1998)  to which he contributed.