Guilt and Innocence – What does it Mean to be Alive?

Guilt and Innocence – What does it Mean to be Alive?

I came to apply for the Kurt Mayer Summer Fellowship in Holocaust and Genocide Studies in April of 2012 after winning second place in the Raphael Lemkin essay contest in March of the same year for my paper “Letters Written in Blood: the Holocaust in Poetry”. The fellowship application was for the topic of guilt and innocence in Holocaust literature, with a focus on Daniel Silva’s trio of 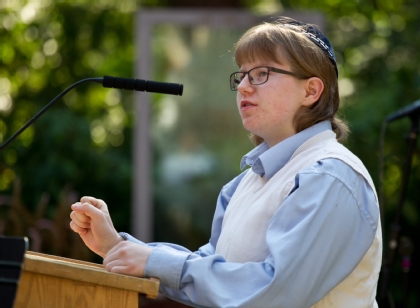 Holocaust-related spy novels and on Herman Wouk’s War and Remembrance.

Out of my books and thoughts rose a paper on issues of guilt in Holocaust literature, finding patterns in chronology between the first and second wave of Holocaust literature. In the first mode, the antagonist and perpetrator is not specifically an individual; rather, evil in the first wave of Holocaust literature is identified with a system of shadow and death. In the second mode, that shadow is personified, given a name, attached to a body, and called Eichmann, Goebbels, Globocnik, Heydrich, Himmler, Höss, and so on, or some fictionalized character based on these real people and so many more. Furthermore, the first mode is typically a survivor testimony or published early on in the chronology of Holocaust literature, where the second may be written by anyone and published later. The paper is entitled “Bureaucrats, Soldiers and Murderers: Issues of Guilt and Responsibility in Holocaust Literature” and I would like to think that while it does not answer the question of why these patterns occurred it does give some evidence that these patterns are there.

I started with an outline, knowing what I needed to read to answer questions about guilt and innocence – that is, I needed volume as well as depth, and historical information on top of literary information. I found about 60 books through the PLU library, and hoped that would be enough breadth and depth for a 25 page paper.

However, there is a saying that no battle plan survives contact with the enemy (paraphrasing von Clausewitz). While my outline was hardly a battle plan and the books themselves not my enemy, the metaphor suffices. Within two weeks of the beginning of my work I was in an entrenched position surrounded by books, the 60 of the original list having expanded to 118. In that entrenched position I felt myself at war with myself, the horror of that which I read and my instinct for compassion fighting my instinct for logic and my will to shove my heart in a metaphorical box. Both sides lost that war. Out of the ashes I emerged with a shattered soul and yet somehow more whole than before.

So, when asked: Do I enjoy my work? My flippant answer is usually along the lines of, “You know what I do, right?” The flippancy disguises, poorly, the depth of my remaining pain which this summer’s research inflicted upon me. A truer, deeper answer to that question is that I love it even though and perhaps because it hurts me. This research has helped to show me what it means to be alive.  I will never forget what it has taught me.