Mycal Ford ’12: A Journey of Discovery 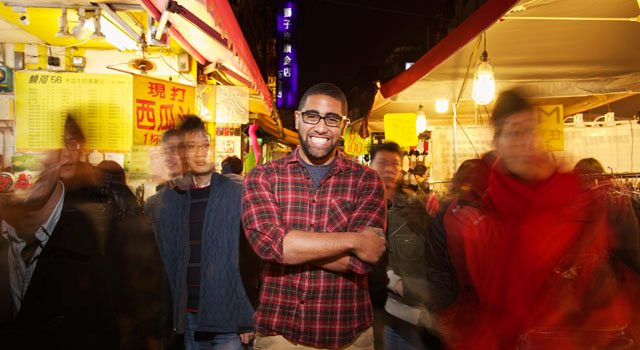 Mycal Ford ’12 has spent the year teaching in Taiwan on a Student Fulbright Fellowship.

Mycal Ford ’12: A journey of discovery leads this Lute to China and Taiwan

Mycal Ford eyed the skewer of fried scorpions he held at arm’s length in front of him and knew he had a decision to make.

Was he going to hold true to his promise to himself – “Say yes to everything?” He had come to Chengdu, China, one of six PLU Gateway programs, with the promise not to hold back, to engage the culture and the Chinese people in any way he could and take chances and advantages of new opportunities. So was he going to commit, or not?

He closed his eyes and chomped down on the scorpions that he’d bought from a market vendor. Two years later, Ford ’12, tries to describe the taste. He gives up.

“Crunchy, and a taste I don’t even want to remember,” he said with a laugh from Kauhsiung, Taiwan, where he is teaching English and hip-hop dance as a U.S. Fulbright Scholar.

Ford, the first in his family to attend college, recalls his three-month-long experience in Chengdu in his junior year as a time that a changed his perspective and certainly changed his life. In his other study away trip to Norway, Ford had not engaged the culture, but merely observed it, as an outsider. He didn’t want to miss the opportunity to jump feet first into an international experience again.

“China did change my life, and it changed me and offered me a chance to look deep within myself and accept that invitation to think differently and feel differently about my world and myself, Ford said.“In China, I didn’t speak Chinese, know anything about the philosophy, history or culture, but I told myself, I was going to take a risk, even if it means trying something I didn’t want to do.”

Looking back, two years later, Ford is so glad he did. He’s now six months into his Fulbright experience in Taiwan, teaching English in two elementary schools, and to those who are interested, hip hop dancing after class. He will be wrapping up his Fulbright commitment in June, and then continuing on to graduate school, which will likely take him back in Chengdu.

And he’s still trying to get a handle on the Chinese language.

“I will spend hours and hours practicing, and the difficulty will bring me to tears,” Ford said. “But everyone once and awhile, I’ll have a conversation that flows. And that makes it worth all the effort.”

His fascination with all things Chinese began on the Gateway trip to Chengdu, where on the on breaks from studying and tours, he’d walk around 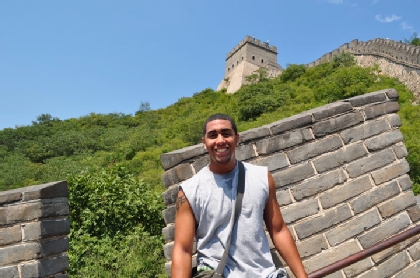 Ford on the Great Wall during his Chengdu trip.

the streets of Chengdu, with a population of 14 million, where he obviously stood out among a very homogenous society. He found that the people of China who were just as curious about him as he was about them.

They would often approach Ford on the street or during his tours of the country and assume he was a basketball player or a rap star on vacation. Ford would relate who he really was, and where he came from – in this case a 22-year-old American attending PLU. Many still didn’t buy it. His Chinese friends were astonished when Ford couldn’t sink a basketball or sing.

Yet eventually, they began to learn about his culture, and he theirs. He accepted all invites to dinner or entertainment from his Chinese friends, without knowing the menu or agendas.

“Chengdu is all chaos and frenzy,” Ford said. “But I found peace in this chaos and all the craziness round me. I found myself asking what it meant to me be me, Mycal Ford, in this country.”

Ford saw Chengdu as an opportunity to share not only American culture but also African-American-American culture. He also told them about his journey as a high school student who grew up in Tukwila, Wash., and had no intention of going to college until a high school teacher encouraged him to check it out, along with a discussion from a friend who was a PLU graduate, Lizbett Benge ’11.

“That conversation made college seem real and attainable,” he said.

He found out about PLU by literally pulling out a crumpled Act Six Scholarship brochure that was stuffed between two books in the counseling center at Foster High School. One thing led to another, and he ended up at PLU, and then quickly found out the norm was students would study away. He found scholarships through the Wang Center that would eventually send him first to Norway and then to China.

“It was the catalyst to defining me in a person in my culture and as a leader in the community,” Ford said of his China experience.

In his three months in Chengdu, he found he loved the stillness in the country, and the frenzy in the city; the open curiosity of its citizens toward him and their generosity in inviting him to everything.

One life-changing moment during the trip came when Ford travelled to Lhasa, Tibet, where he watched devout Buddhists make a pilgrimage to a city and prostrate themselves in a circuit around the temples with prayer wheels, especially at the Jokhang Temple, one of the holiest sites in Tibet to Buddhists. Prayer flags would snap against the wind, along with the Chinese national flag. Centuries old streets, would intersect with more modern boulevards.  Smells of spices, dust and exhaust fumes would compete for dominance.

“I was just transfixed by the place,” he said.

When he returned from Chengdu, he was hooked. China was “like studying a puzzle,” Ford says. And a puzzle that drew him in with its people, its art, history and politics. His intellectual curiosity simply wouldn’t let him put the topic or the place, aside.  He  future was going to be linked to international studies; he just couldn’t wait to get back. He did manage to go back in 2011 to study ethnic minorities in China. It was Professor Adam Cathcart, who happened to be in China at the same time, who suggested he might want to apply for a Fulbright Scholarship as Ford entered his senior year.

“I remember asking “What was that?” Ford laughs.

So he did. He was sitting in class his senior year when the confirmation of his acceptance appeared in his email.

“I’d been hitting refresh all day,” Ford says. He erupted in a delighted yelp, and it was pandemonium in the class as his fellow students congratulated him. Eventually, the professor dryly asked if it was okay with Ford if class resumed.

Eventually, Ford sees himself working at a policy institute or think tank, or perhaps the State Department with a focus on US-Sino relations. And after that? Who knows ? It all depends on which challenge Ford is ready to chew on next.