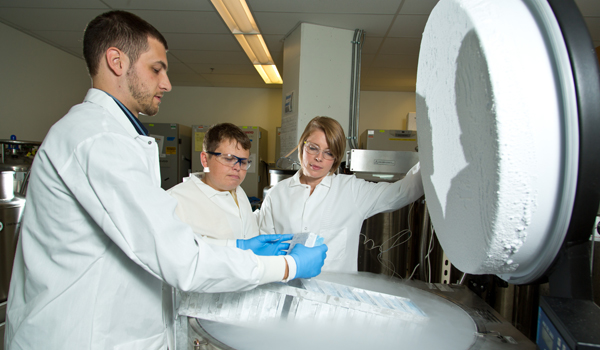 Five weeks after Bryce Manso graduated with his biology degree from PLU, he got his first job as a lab technician at Seattle’s Fred Hutchinson Cancer Research Center. He remembers his interview well. Before Manso could even shake his hand, his interviewer enthusiastically said to him: “Go Lutes!”

The interviewer would be Manso’s future boss. And while the future boss hadn’t attend PLU, his wife had. In fact, the two had the same swim coach 15 years apart.

In the two years he has been working at The Hutch, Manso has worked in four different areas of the lab, and he’s already been promoted. He is currently responsible for efficacy studies on the HIV vaccine trials conducted in the research and development department. He credits his professors in the PLU biology department, particularly Mary Ellard-Ivey and Ann Auman, for being able to move so fluidly – and quickly – up the ranks.

“My profs had a very similar view: No matter what we were studying, they would always bring it back to the bigger picture,” Manso said. “They would put everything we were learning in context, quite literally saying, ‘Here’s how this will look in the workplace.’”

That ability to take scientific concepts and quickly implement them in the workplace has served him well.

It has served other PLU graduates well, too. Manso says he is in one of the larger labs at the research center and, by his unofficial count, PLU has a higher representation in his lab than any other university, except perhaps the much larger University of Washington. The large number of Lutes builds a certain camaraderie in the lab – Julie Williams ’09 and Tisha Graham ’09 will also attest to that.

In the years he’s been at The Hutch, Manso has noticed that, among the new employees that join his lab, it is the PLU students who seem to be significantly more self-reliant than graduates from other schools. “Lutes always seem to be a few steps ahead of others,” he said.

He chalks that up to the preparation he and his colleagues received at PLU.

“The professors always prepared us for how things would be in the ‘real world,’” Manso said. “They kept saying, ‘You’ll use [these skills] for the next 50 years of your life.’

“And so far,” he added, “they were exactly right.”

To read about Jessica McGifford ’12 and her real-world mentor, click here.