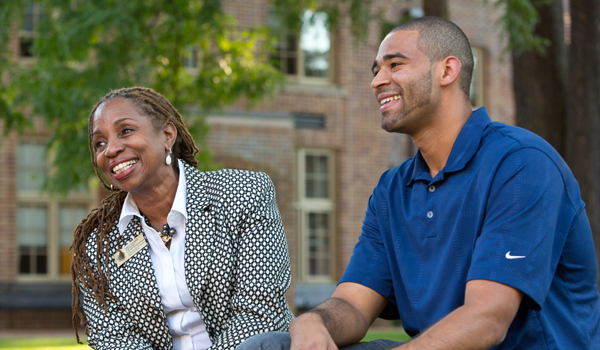 Melannie Denise Cunningham ’12 and Victor Bull ’10 hang out near Red Square on the PLU campus.

Victor Bull and his admissions advisor Melannie Denise Cunningham were in a verbal bean bag toss as they relaxed on a warm day this fall just off of Red Square.

“I give all the credit to her,” Bull said, as he talked about first finding an internship, and then a job, at State Farm.

“I just opened the door and he walked through it, fully prepared,” said Cunningham, PLU’s director of multicultural recruitment.

The conversation goes on like this for some time, but in the end, they both agree that the strong connections that PLU has with its local business community was key in both getting Bull his first internship and getting his career launched. He recently moved back to the San Francisco Bay area for another State Farm job.

But still, Bull said his mom’s jaw dropped when he told her of his decision to go to PLU.

“She’d thought I’d never want to go to a Lutheran college,” he laughed.

Almost from the moment he stepped on campus, a series of mentors took Bull under their collective wings. Basketball Coach Steve Dickerson immediately introduced Bull to Cunningham, who introduced him to key upper classmen. When Bull inquired about an internship, Cunningham knew how to connect the dots.

She first reached out to an acquaintance who is a recruiter for State Farm’s intern program. It all led to Bull applying, interviewing, and competing in a very rigorous process that led to his being hired for a summer internship during his sophomore year at the DuPont, Wash., firm. He was offered a job in the claims department upon his graduation with a business degree.

“He did the work,” Cunningham cut in, unwilling to have Bull hand her all the credit. “He was prepared. He showed up ready for the interview and ready for the challenge.”

To read about Maura Gannon ’10 and her real-world mentor, click here.