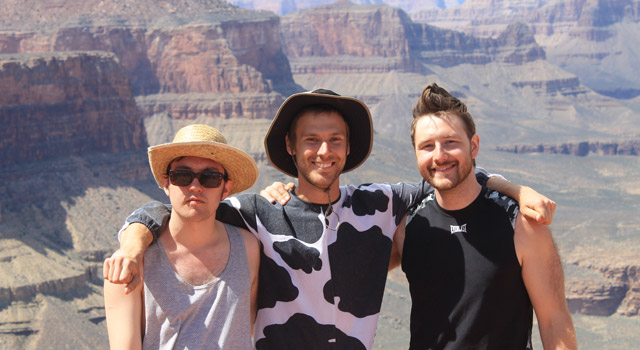 Twelve Lutes, along with three guides from Outdoor Rec explored the Grand Canyon and Canyonlands National Park as part of the programs alternative spring break.

Twelve Lutes went, along with three guides from the program – Matt Leslie, Jack Rubenkonig, and yours truly. We spent two full days in each National Park, and the rest of the time in transit. Along the way we also stopped through the four corners to play a quick game of four square before the hordes of tourists forced us from our jovialities.

Amongst belly laughs and hobo dinners, we rafted the Colorado river, hiked in full costume on one of the Grand Canyon’s most populated trails, and adventured through self-proclaimed strenuous trails in an area aptly named Island in the Sky. Our skin grew tan and leathered – or just plain red in some cases – and our spirits clicked the refresh button after a grueling front-end of the semester.

A diverse range of backgrounds and majors were represented in our numbers, but we came, in the end, to rove as one cohesive pack. I, personally, felt deeply thankful to lead this incredibly enthusiastic, charismatic, and positive bunch, remarking on reflection with another guide that we could not recall on negative comment from any member of the group.