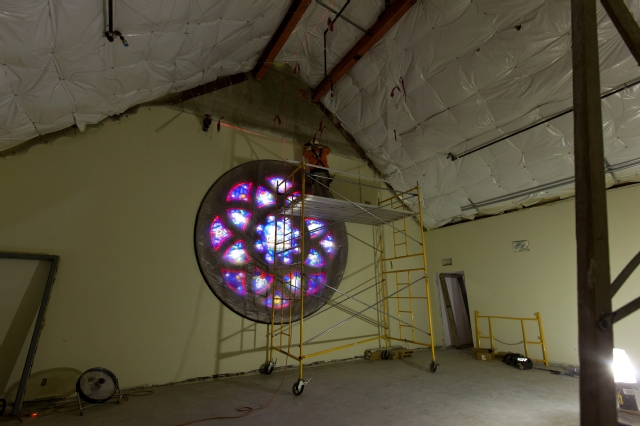 Work on the Ness Chapel and the Karen Hille Phillips Center for the Performing Arts continued through August, and will continue until just before students arrive. (Photo by PLU Photo Director John Froschauer)

Construction on the performing arts center, dugouts and the halls continue throughout the summer

Finishing work continues on the Karen Hille Phillips Center for the Performing Arts, as Phase Two construction wraps up in the auditorium, stage area and downstairs, all in anticipation of the grand opening this fall. The seats for the auditorium will be installed this month, as will the furniture for the center, said John Kaniss, PLU’s construction project director.

“It will all be done this month,” Kaniss said. And Kaniss makes that declaration with a touch of pride. It’s well deserved.

The 45,900-square-foot center takes the name of Karen Hille Phillips ’55, a nursing graduate and former PLU regent who, upon her death, bequeathed more than $10 million to alma mater which was used for the completion of the project. The three-year, $20 million endeavor completed in two distinct phases will officially open with the production of Cole Porter’s Tony Award–winning “Kiss Me, Kate” on the rechristened Eastvold Auditorium Main Stage in October.

Aside from the original brick exterior, everything is new – from the copper roofline to the miles and miles of conduit buried underneath. Seating in the auditorium ranges around 600 depending on configuration – about half of Eastvold’s former capacity. By removing those extra seats, architects were able to create space for an orchestra pit, and greatly enhance the acoustics and the sightlines. The sound, lighting, rigging, and other technical infrastructure is state of the art. Phase II also includes many changes not related to theater. PLU’s cherished Tower Chapel is restored, renamed the Ness Family Chapel, thanks to a $2 million gift from Kaare and Sigrunn Ness, Arne Ness ’69, Shane Ness ’99 and Cindy Ness.

Facing east from the center, and walking across the street, while one key project wraps up, another is just beginning. The $20 million Garfield Station project continues along Garfield Street, right off campus, as the last of the buildings are torn down along the street and east campus. The project includes a four-level high rise which will include 104 apartment units and 7,200 square feet of retail space on the street level. PLU plans to fill some of the available space with the office of Human Resources and the Marriage and Family Therapy program, as well as several new classrooms.

Moving to lower campus, work continues on the softball dugouts, which will include new backstops, new drains and wiring in the fields, and a new scoreboard. The $500,000 project will be completed in September, Kaniss said. Students will notice refinished floors at Olson Auditorium  and Memorial, as well as new wood floors and bleachers on the second floor of Olson.

Upgrades are continuing to several classrooms in Hauge, while new air conditions are being installed in Ingram, renovations to Stuen Hall, and kitchen upgrades to Hong Hall. Stuen Hall will be closed fall and winter semesters and reopen next summer. In the meantime, Stuen residents will be bunking in Ordal, and throughout the rest of campus, Kaniss said.  Finally, the Chris Knutsen Hall in the UC is having its floor refinished.