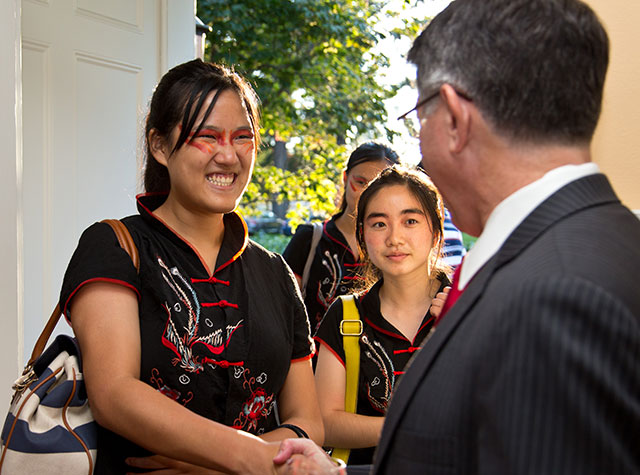 A group of six students from Taiwan University visited PLU as part of their country’s Young Ambassadors program. (Photo by John Froschauer)

During a history class at PLU, six students from Taiwan University immersed themselves in discussion with PLU students, debating issues in the Eastern Pacific that continue to face world leaders and learning how diplomacy works.

The class was broken into three groups, representing Japan, Taiwan and Norway. Their task was to debate the merits of ownership of the Senkaku Islands, which has been an ongoing dispute between Japan, China and Taiwan, with claims of ownership going back centuries.

“At the very beginning we asked the students, ‘What makes a good diplomat?'” said Gina Hames, chair of the History Department.

Japan and Taiwan made their case, and the Norwegian group was to discuss the merits of each. Ultimately, they learned using evidence to state a point and clarifying meaning are vitally important.

“You want to get at what they said so it is clear, but you also want to know their worldview,” Hames said.

The opportunity to use a real-world diplomatic dispute in a classroom exercise is one reason the delegation from Taiwan made sure to include PLU in its tour of colleges; meetings with government officials; and visits to Northwest business leaders such as Boeing, Microsoft and Evergreen Shipping.

As part of its Young Ambassadors program, Taiwan, sent a delegation of six students and their professor to the United States to help promote the country and learn about American culture. The six were chosen because they are some of the brightest from the country’s top university—Taiwan University.

“Our mission is to promote tourism, our culture and cuisine,” said Cathy, Meng-chi Chang, a junior library information sciences major from Taiwan University. “We think of Taiwan as an island full of love and stories.”

She was very impressed with how well places such as PLU embrace Chinese Studies. It was her first time overseas, and she felt the whole journey was well-worth the scramble to make sure she was covered for classes in Taiwan because they started while she was in America.

“I was busy emailing the professors to thank them for letting me go,” she said.

“We want our new generation to understand what happens in foreign countries and bring to others our own country,” said Jia-Li Hsu, the Taiwan University professor accompanying the students.

International travel allows for real discovery that can’t be replicated, she said.

The group chose PLU as part of its journey because during the previous year, a representative from Taiwan visited a class in the History Department and was very impressed with the innovative curriculum.

“He actually sent the recommendation made by a PLU student during that class – about how to solve a regional dispute in the ocean off Taiwan – back to Taiwan to the president of Taiwan,” said Mahlon Meyer, visiting assistant professor of History. “The country then enacted the suggestion.”

The Taiwanese students stayed with home-stay families of PLU professors and paired with PLU students throughout out their two-day experience. Along with class and visiting Northwest business leaders, the delegation enjoyed the on-campus experience, performed a traditional Taiwanese dance and attended a reception at the Gonyea House.