What exactly is a ‘CAPSTONE’? (And how will it get me a job?) 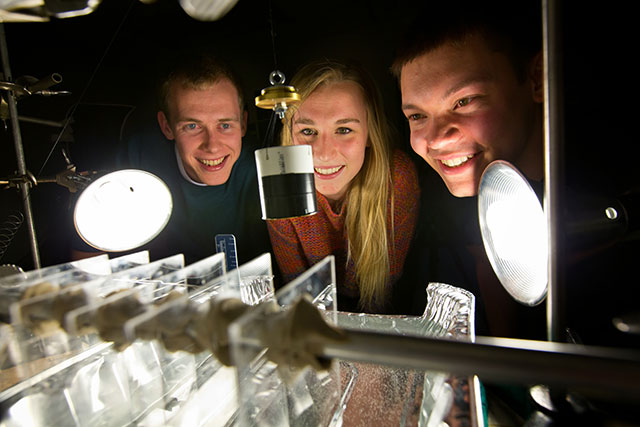 Mark Lee, Mimi Granlund and Matt Hubbard and the apparatus they built to help them understand how the roughness and size of a tongue would affect the amount of water an animal could lap up and still be efficient.  (Photos by John Froschauer)

What exactly is a ‘CAPSTONE’ (And how will it ge me a job?)

So just how does one get a job – or an offer to grad school – by studying slobber?

First step: Start studying slobber – or specifically how tigers lap up liquids – as part of a PLU capstone project.

Two years ago, physics major Matt Hubbard ’13 became intrigued by the subject when he encountered research taking place at Massachusetts Institute of Technology, which analyzed the roughness and size of a tongue and its relation to water-column pull and strength.

“I liked the fact that you could take a field of complex mechanics and relate it, in a tangible way, to an everyday occurrence,” Hubbard said.

He worked on his project for two years – logging over 400 hours – before deciding to branch off in a new direction and enlisting the help of fellow science geeks Mark Lee ’13, an applied physics major, and triple-threat Mimi Granlund ’13, an arts, physics and math major.

Hubbard’s team also spent hours studying videos of cats, dogs and tigers slurping, as well as taking a trek to the Point Defiance Zoo to check out a real tiger (from a safe distance) drinking water.

The three-member capstone team sought to determine the point at which the size and roughness of a tongue affect the amount of water an animal can pull up efficiently. The answer: about the size and roughness of a Sumatran tiger’s tongue. Having a tongue any larger doesn’t get a thirsty cat any more water. Animals then have to find other ways to hydrate, like sucking or drinking through a trunk.

Hubbard estimated he put in 400 hours over two summers on his own, and then another 250 hours over this last year to produce a report and capstone presentation.

Their presentation was standing room only.

Hubbard and Lee credit the project with helping them both continue their studies in graduate school. As for Granlund, at the time of her presentation she was waiting nervously to hear whether she would get a job as a data analyst at Seattle-based Horizon Air. She credited this physics capstone – she had to do two others to complete her triple major – with catching the attention of the human resources department at the airline.

Every spring, hundreds of PLU students go through the drill of final projects, called capstones. But these research projects, works of art, or music compositions are much more than a final box to be checked before students cross the stage, shake the president’s hand and march into their new lives.

For many, the capstone is a stepping stone to bigger things – grad school, job, or once-in-a-lifetime opportunity where one’s passion and degree intersect. It’s a definite point of passage for a student, notes Ann Auman, associate professor of biology.

“Capstone is time for integration of the knowledge which a student has learned in a major, with the ability to communicate that knowledge in both written and oral forms,” Auman said. “In this day and age, it is becoming increasingly important for experts to be able to communicate with the general public. Capstone, then, serves as a transition point between students being receivers of knowledge to students becoming teachers of knowledge to their peers and to the general public.”

Capstones aren’t necessarily unique to PLU – many universities have them – but the level at which professors are involved with the students certainly is, according to Paula Leitz, associate professor of education.

“Capstones at PLU engage students in focusing their total PLU education into a focused area. It is not just a culminating activity – it is an opportunity to rethink and refine one’s personal reflection on the result of four years of intellectual engagement at PLU,” Leitz said. “Faculty are a significant part of this process as they lend their expertise and provide individualized support to students.” 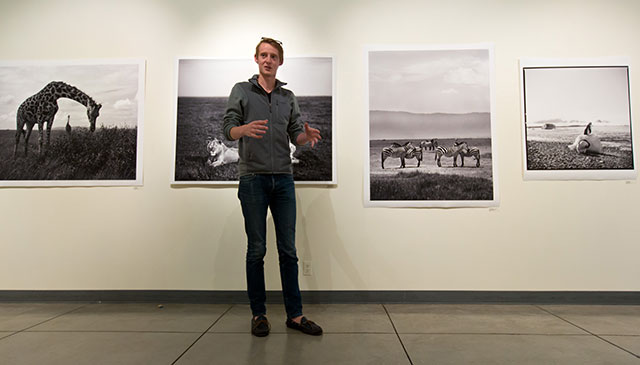 Nevis Granum ’13 exhibits some of his photographs as part of his capstone project. The project would lead to a Kelmer Roe Fellowship to study in Africa.

This is certainly true for Nevis Granum ’14, whose passion for photography and saving endangered wildlife led to his capstone, a senior gallery exhibition of photographs taken during his J-Term trip to Tanzania. The experience of curating and exhibiting his work led Granum to apply for, and receive, a Kelmer Roe Fellowship to study in Africa with PLU Professor of English Charles Bergman this summer. From the fellowship, Granum, an art and English major, hopes to parlay his love of the natural world and photography into full-time employment.

“The experience of putting together this capstone has been absolutely invaluable,” he said.

Eventually, Granum would like to make photographing and writing about endangered species his life’s work. “Yeah, I know it’s a cliché, but yes, I’d like to work for National Geographic,” he laughed. 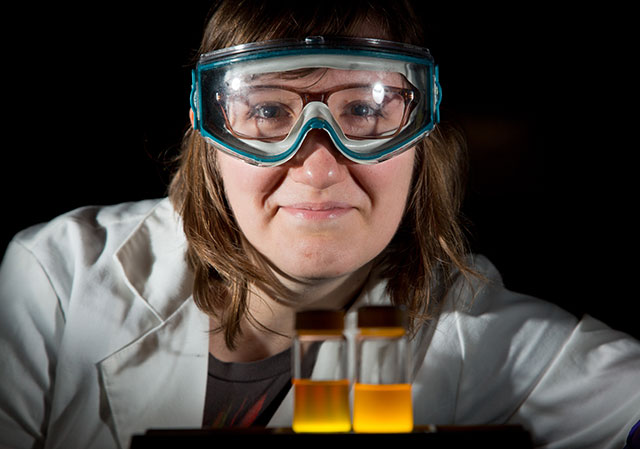 Jenny Stein studied colloidal dots and their capacity to absorb and re-emit energy in the form of light.

Jenny Stein ’13 is hoping her time in the lab looking at small glowing crystals will eventually lead to a job researching solar energy. The glowing crystals are called colloidal quantum dots, and Stein has been studying their capacity to absorb and re-emit energy in the form of light.

“I really do like the whole concept of renewable energy and applying this to solar cells,” she said.

Stein entered PLU with hopes of going to medical school but then switched to chemistry and pure research when she became involved in this project, into which she poured an estimated 100 hours’ worth of work by the time she graduated. She will be going directly into a chemistry Ph.D. program at the University of Washington in the fall.

“I’m so qualified to be in that program, and this has really helped,” Stein said of her project. 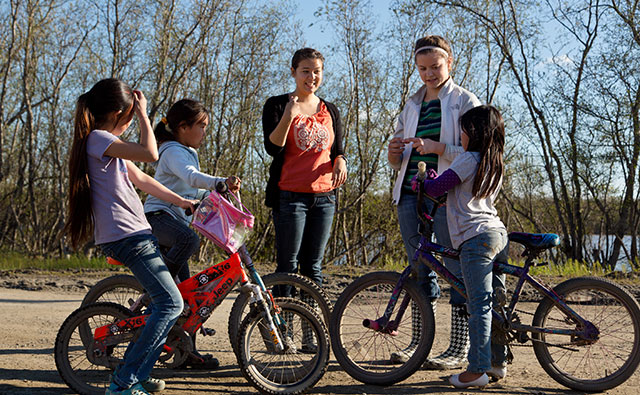 Nataly Meyer ’13 and McKenzie Allen’s ’13 student-teaching capstone led to an opportunity to travel to a remote region of Alaska, where they taught at a summer-school program west of Bethel, the nearest city.

For both Nataly Meyer ’13 and McKenzie Allen ’13, a student teaching-capstone experience in Namibia has lead to their first jobs, days after graduating, when they flew up via bush plane to the remote Yupiit School District in southwestern Alaska. There they worked with six other Lutes in a summer-school program in three villages northeast of Bethel, the nearest city.

The superintendent in the district specifically asked for Lutes as anchors for the school district’s summer program, and with a special eye toward hiring new alumni like Meyer and Allen who had done their student-teaching senior projects Namibia. The cross-cultural experience they both received in Africa made them ideal job candidates for the excursion to Alaska.

After the summer-school adventure ends, both already have interviews lined up for the school year, they said. 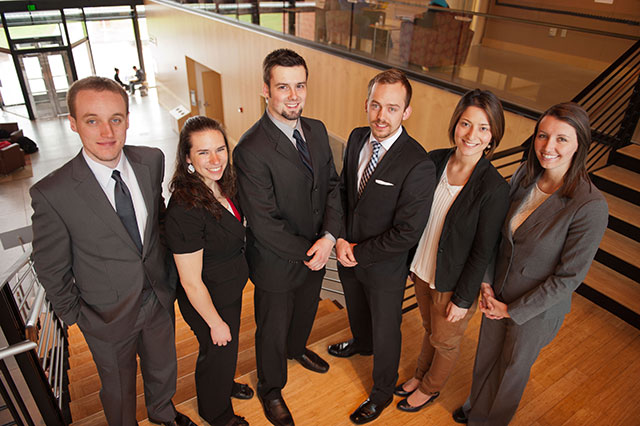 Zach Grah ’13, left, and his fellow students ran a simulated company for 20 consecutive quarters, culminating in a competition against 29 other universities in Long Beach, Calif. (Photo by John Struzenberg ’15)

Grah was one of six business majors who, as part of their capstone, participated in the International Collegiate Business Strategy Competition in Long Beach, Calif. For the competition, student teams create a simulated company, develop a product concept and business model for that company, and then run that company – top to bottom – for a simulated 20 consecutive quarters. Grah was elected CEO of the “business,” ResoLute, which competed against 29 other teams.

According to his advisor, Associate Professor of Business Kory Brown, each student typically spends 300-500 hours preparing for and participating in the competition.

“Students are stretched in ways no other academic setting can stretch them,” Brown said. He calls simulations like these “the real world with a safety net.”

For Grah, the team’s CEO, that meant for about six months he was managing his team and setting goals, as well as handing a team with strong, and often different, opinions. It gave Grah the confidence to say yes to a job at a start-up this summer.

“I don’t think I would have had the confidence to join a startup without having to go through the competition first,” Grah said.

Back to the tiger-slurping project. Matt is headed off to the U of W, while Mark is pondering his grad-school choices. Also after weeks of waiting, and wondering if all that work in a darkened room watching tigers lap water would pay off, Mimi received a telephone call from Horizon Airlines a few days later.

She got the job.