Welcome to the winter edition of Scene—and, in the spirit of the season, a stockingful of newness. Starting with me.

My name is Sandy Deneau Dunham, and I’m Scene’s brand-new editor. As a journalist who’s been away from journalism for a spell, I am thrilled and honored to join Scene—and Pacific Lutheran University.

I had bumped into PLU here and there over my 20-plus years in the Pacific Northwest—first as an editor at The News Tribune, and most recently as the mother of a potential new Lute. But even though I’d been on the PLU campus, I’d never really connected with the PLU campus—and its people, and its history, and its mission—until I became part of it.

I imagine you know what I mean. There’s just something about this place, and its people. And that’s the story we want to tell. 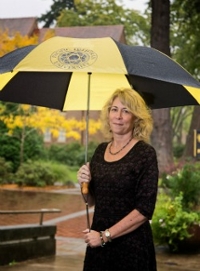 We start with this issue’s behind-the-scenes look at the energy, passion and jaw-dropping juggling acts that go into PLU’s highly anticipated Christmas Concerts. You’ll also meet a PLU professor and student whose adventuresome story of purpose—and parrots—doubles as a travelogue right out of Africa (and an introduction to the legendary Jane Goodall!). We’ve also developed a new approach to the annual Honor Roll of Donors that emphasizes the people, and the personal motivation, behind some inspiring acts of meaningful generosity.