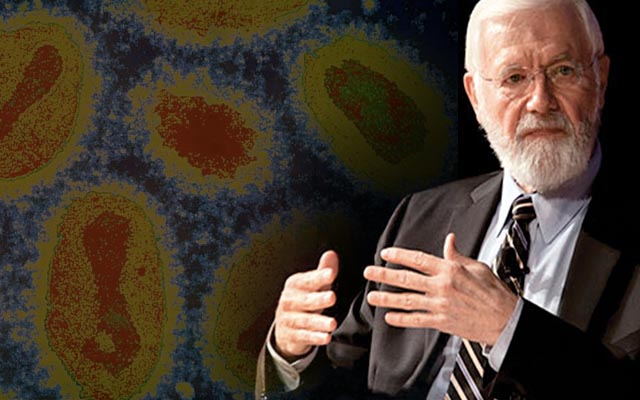 Alumnus Dr. William H. Foege, recipient of the Presidential Medal of Freedom for leading the fight to successfully eradicate smallpox, returns to PLU on Nov. 21 for a free public lecture and book-signing. The event will take place in the Phillips Center at 7:30 p.m.

Dr. Foege, an epidemiologist, worked on the successful campaign to eradicate smallpox in the 1970s. Presenting Dr. Foege with the nation’s highest civilian honor at the White House Medal of Freedom ceremony last year, President Barack Obama called him a leader in “one of medicine’s greatest success stories.”

Foege received the award along with such notables as singer Bob Dylan; astronaut John Glenn; former Secretary of State Madeleine Albright; and another Washington state resident, Gordon Hirabayashi, a sociologist who fought against the forced relocation of Japanese-American citizens during WWII.

After his PLU talk on Nov. 21, Foege will sign copies of his book, House on Fire, which explains how smallpox, a disease that killed, blinded and scarred millions of people, was completely eradicated in a spectacular triumph of medicine and public health. Part autobiography, part mystery, the book describes Dr. Foege’s experiences in public health and details the remarkable program that involved people from countries around the world in pursuit of a single objective: eliminating smallpox forever.

An Atlanta-based physician and epidemiologist, Foege and colleagues founded the Task Force for Child Survival in 1984. While at the CDC, he forced drug companies to warn that aspirin might cause the sometimes-deadly Reye Syndrome, reacted quickly to alert women to the dangers of toxic shock syndrome and saw the first cases of a frightening new disease in the early 1980s: AIDS. Over his career, he has been, quite simply, recognized as one of the most important figures in public health.

He helped shape the global-health work of the Bill and Melinda Gates Foundation, and remains a champion of a wide array of issues, including child survival and development, injury prevention and preventative medicine. Foege’s leadership has contributed significantly to increased awareness and action on global health issues, and his enthusiasm, energy and effectiveness in these endeavors have inspired a generation of leaders in public health, according to a White House biography.

Speaking in 2006 at the dedication of the William H. Foege Building at the University of Washington, former President Jimmy Carter called Foege one of the two men in his life, other than his father, “who have shaped who I am.” Also speaking at the dedication, Bill Gates credited Foege with providing early guidance for development of the global-health team at the Bill and Melinda Gates Foundation.