Saved By the Ball

Saved by the Ball:
How Football Led Jahleel Barnes to PLU—and to the Seahawks 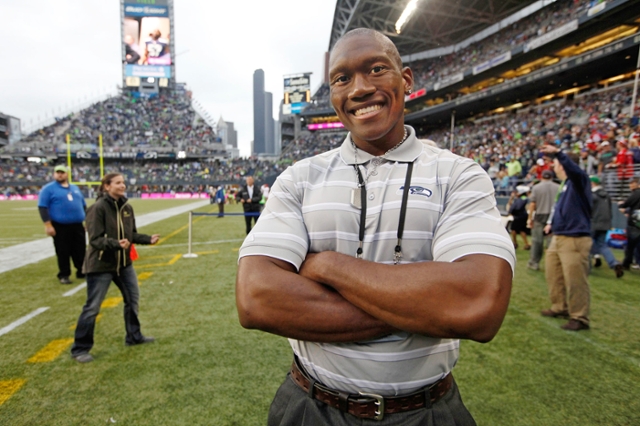 As an intern for the Seattle Seahawks, Jahleel Barnes ’13 is a Lute living his dreams. Photo by John Froschauer / PLU

By Barbara Clements
Content Development DirectorAt the age of 23, Jahleel Barnes ’13 is well on his way to making a significant dent in his bucket list:

Barnes graduated from PLU with a degree in business—and uses that degree every workday as an intern for the Super Bowl-worthy Seattle Seahawks.

All these dreams once seemed so out of reach for Barnes, the first of his family to graduate from college. Growing up in Redmond, where he was the only African-American child in his elementary school, Barnes recalls being bullied and taunted. Of course, the times he did try to defend himself, a teacher would show up, and Barnes would be the student cooling his heels in detention.

Barnes wasn’t even sure whether he would stay in school, until his older brother hooked him up with the game of football. Then everything changed for Barnes, who now tops out at 6’3’’.“Football balanced me out,” he said just before he left with the Seahawks for New York City. “It saved me.”

His grades improved, and he was hooked. He found a second family on the gridiron and eventually led Jackson High School in Mill Creek, Wash., to a state playoffs.

When it came to choosing a college, Barnes realized he had a decision to make: Did he go for a D1 university with a possibility of a walk on opportunity for that football team, or a D3 school with superior academics? PLU’s business school was the deciding factor.

“PLU’s business school was hands-down the best, and I needed to look ahead to my future,” he said. “There was just no comparison with Boise State.”

One of his only regrets in attending PLU was not discovering the university’s Career Connections center sooner.

“It s a really amazing place, and I just wished I’d found out about it sooner,” he said. “In my senior year, I really found out how important networking is.”Still, though, Barnes’ business degree (with a marketing emphasis) and a series of connections led to the internship with the Seahawks last summer. It was supposed to last only six weeks. But now, six months later, he’s in New York City with a championship team.

“I just love the vibe when you’re in the stadium (The Clink, of course) and you get the energy and vibe of the 12th man,” he said. “It’s amazing.”

Once he landed his internship, Barnes became immersed in the weekly rhythm of recording press conferences and transcribing them, assembling press packets, collecting stats and fielding press calls. He’s an avid football fan—his vernacular drifts into this play and the corresponding play he’s seen in past games—and he loves marketing.

“Sports has taught me never to give up, and that having a hard work ethic will get you far,” he said. “But if you’re willing, have an eager mindset or are coachable, good things will happen.”

As for the bucket list and his dream job? He laughs.