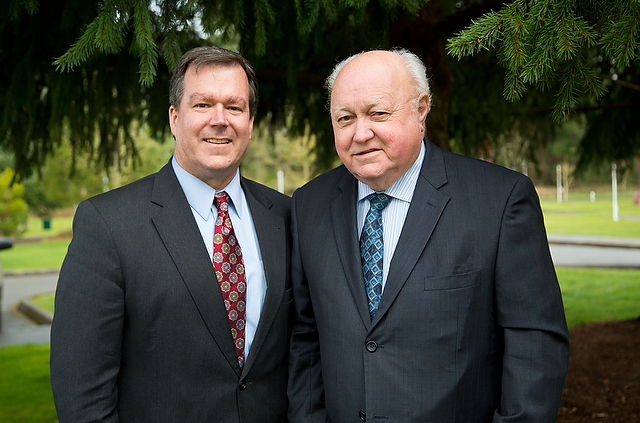 Two top professionals from PLU’s Office of Advancement—Ed Larson and Doug Page—received two prestigious awards this spring, honoring them for their professionalism and service in their careers.

Ed Larson, Executive Director of Estate Planning, will be honored May 7 with the Frank Minton Professional Achievement Award, which is given by the Washington Planned Giving Council. In 2012, the Washington Planned Giving Council established the Frank Minton Award to recognize those who have demonstrated an outstanding career of service, dedication and leadership in charitable gift planning.

“This award means a great deal to me because the selection comes from my colleagues in the development community,” said Larson, who graduated from PLU in 1957 (his wife, Betty,  and three children also are PLU graduates). After graduation, Larson attended Luther Theological Seminary and then served as the Lutheran campus pastor for Colorado State University and for Oregon State University before returning to PLU in 1970. He has worked in the PLU Office of Advancement since.

In February, Doug Page, Executive Director of Gift Planning and Grant Development, received the Virgil Anderson Award from the Association of Lutheran Development Executives at the annual conference for that association. The award is presented to a member who has demonstrated exemplary leadership and service to an organization within the fundraising and or public-relations fields.

“The Association of Lutheran Development Executives has been an important part of my professional development, as well as a place where I am honored to have served and continue to serve and support,” Page said. “The Virgil Anderson Award has always been to me something I could aspire to, and and now I am encouraged to live up to its high standards.” Page is in his 15th year at PLU and has more than 26 years of fund-raising experience, including as the director of planned giving at the University of Puget Sound in Tacoma; Saddleback Memorial Foundation in Laguna Hills, Calif.; and at his alma mater, California Lutheran University in Thousand Oaks.

In recommending Page for the award, Loren Anderson, former President of PLU, wrote, “Doug is a consummate professional; his work is grounded in his strong Christian faith, his clear understanding of stewardship and his deep commitment to the mission of Pacific Lutheran University. He understands that the donor must come first, and that his calling is to match donors with opportunity in a way that benefits both donor and the University.”