PLU Ahead of Curve on Violence Prevention 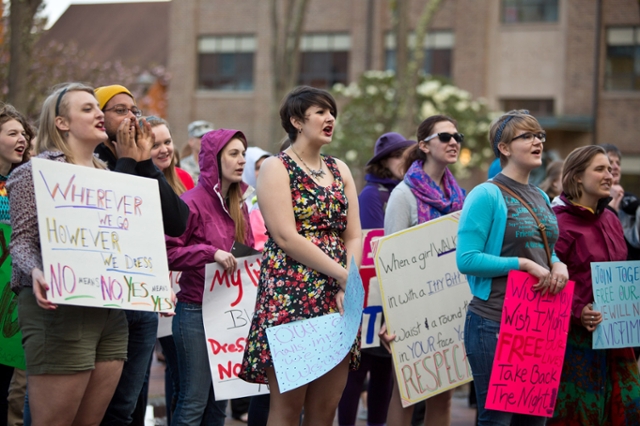 Participants at the the 2014 Take Back The Night rally, which focuses on the issue of assault prevention. (John Froschauer, PLU Photographer)

A new report released April 29 by the Obama Administration outlined key steps the nation’s colleges need to take to prevent sexual-assault incidents on campuses, such as encouraging intervention and promoting awareness of dangerous situations.

But after speed-reading through the 20-page document, Jennifer Warwick, Voices Against Violence Project administrator at the Pacific Lutheran University Women’s Center, said PLU already has implemented almost all the key recommendations of the report.

“I think we’re ahead of the curve,” Warwick said.

A few of the top recommendations—such as promoting bystander intervention and training victim advocates—have been in place at PLU for the last eight years. In 2005, PLU received its first Department of Justice grant to promote victims’ advocacy, men’s engagement, developing a bystander intervention program, and training for campus and local law enforcement.  All these programs are now in place, she said.

Even so, PLU will continue to work to improve its response to this issue, said Laura Majovski, Vice President of Student Life and Dean of Students.

“Each summer, we review our existing student conduct policies and programs. This summer’s review will include the recommendations published by the Obama Administration as well,” she said.

Warwick said one place to start with improvements might be taking another campus climate survey so the campus can program and intervene effectively with students. The last climate survey—looking at commonly held beliefs of students, and barriers to reporting—was done in 2007.

Even before the report, the issue of sexual assault, and its prevention, was being discussed around campus due to an annual event, Warwick said: A crowd filled Red Square April 25 at PLU’s annual Take Back the Night march, hosted by the Women’s Center. At that event, speakers including PLU President Thomas W. Krise spoke out about how each individual must take responsibility to intervene to put a stop to sexual assault.“President Krise speaking out at that gathering was huge,” she said. “Students know this is an issue, and there is help and there is hope for preventing it.”

Tuesday’s report was commissioned by President Obama in January after the issue gained national attention when allegations surfaced that several prestigious colleges—such as Amherst or Vanderbilt—were ignoring the issue of violence on campus, or trying to downplay the issue.

Campus pastor the Rev. Dennis Sepper said PLU addresses this issue with incoming freshmen during their first weekend on campus. During orientation, first-year students are introduced to PLU’s Green Dot program, which tells bystanders how to safely intervene when they witness an abusive situation.

First-year students also are counseled on safety tips in and around campus when attending social events, he said. Green Dot recently has joined forces with the ROTC’s Sexual Harassment/Assault Response and Prevention (SHARP) program to talk with PLU’s cadets about standing up for victims, and about steps each individual can take to prevent sexual assault.

Another new program also requires new PLU students  to complete an educational online module that provides valuable prevention tips, information on what forms of sexual violence can occur on college campuses, said Ray Lader, Associate Director of Student Rights and Responsibilities at PLU. The module also informs students about available resources and highlights important policies to help them be prepared for their college experience. The program, called Think About It, has given the university valuable data “that helps us know what further information and resources our students need in regards to these important issues,” Lader said.

At last week’s Take Back The Night event, Lt. Col. Kevin Keller, head of PLU’s ROTC program and professor of military science, said this issue has affected his family personally, and he is frankly embarrassed and dismayed by recent headlines of the rising rate of rape and sexual assaults within all branches of the military.

“We need to get out of the ‘man box’ that society has put us into, where we need to be controlling to be a man,” he said.

Keller said he personally speaks to each of the cadets at PLU about standing up as allies and preventing sexual harassment and violence.

Jonathan Grove, the Men’s Project Coordinator at the PLU Women’s Center, noted that the Department of Justice has recognized and funded programs at PLU since 2005 because the campus has been so effective and such a thought leader in violence prevention.

“As this report suggests, pairing prevention efforts that engage the whole community and victim support are centrally important in bringing down these national statistics,” he said.