Marissa Meyer ’04: Living the Dream as a Best-Selling Author 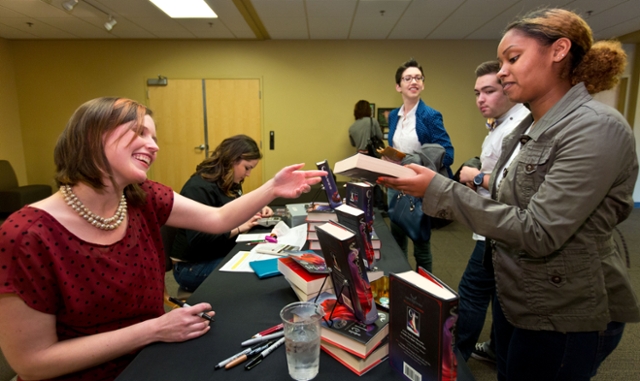 Marissa Meyer ’04 signs one of her latest books in the Luna series, ‘Scarlett’, for a fan this spring at PLU. (Photo: John Froschauer/PLU)

Marissa Meyer ’04 admits she’s a bit of a nerd—and comes proudly from a long line of nerds, including an uncle who converted the second floor of his house into the bridge of the Enterprise. Really.

And Meyer loves fairy tales. She was entranced when she first watched The Little Mermaid at 5 years old. But she never quite figured out how to combine those two passions until she had a dream one night in 2008 about Cinderella as a cyborg and her foot falling off as she tried to run away from the ball.

“I woke up and said, ‘Thank you, subconscious,’” Meyer laughed during a recent visit to campus. Meyer is currently writing the fourth book of her Luna Series, which places fairy-tale characters into a sci-fi world. Meyer visited campus twice this year, first in February for her official book release and signing party for Cress, the latest book in the Luna Chronicles, and then again in April to talk to Writing and English majors about her journey from PLU to best-selling author. Cress is Meyer’s third novel, with the fourth—Winter—scheduled for release in 2015.

Meyer’s love affair with writing began early—she remembers writing stories about the time she saw The Little Mermaid. Her interest in nerdy things started when she became hooked on the Sailor Moon series and began madly writing fan fiction around the series.

“I always knew that I wanted to be a writer,” she said. “This was pretty much my dream, to be an author. It was on my horizon.”

At Pacific Lutheran University, she received her degree in Creative Writing and Publishing, then promptly took a job at Marquand Books Inc., where she had worked as an intern. The firm hired her right after graduation, and she worked as an editor at the company for four years.

“They made a position for me to come back,” she said. “It worked out perfectly.”

Then in 2008, two events caught her attention. First was a regional writing contest that would win her a free walk-on role in an upcoming Star Wars movie, and second was National Novel Writing Month, which takes place every November. Writers are encouraged to write 50,000 words during the month, so Meyer figured “why not,” pulled out her idea for Cinder and began churning out the words. Her goal was ambitious: Write 150,000 words for the month, and outline all four books in rough form.

She didn’t win the most-words-written in the month (fell 1,000 short) or get the walk-on part on Star Trek, but she did get the outline completed. She then spent the next two years drilling down Cinder, rewriting the book almost from scratch, all the while working full-time at the Seattle publishing house.

Finally, she felt, it was time to find an agent and get the book published. What she didn’t expect was just how fast both events would occur. It took her two months to sign an agent, and they polished the manuscript for weeks. Her agent then took the book to a publishing house on a Friday. Within 72 hours, she had a contract.

So now Meyer is working on book four. All four have been optioned for movies, though she can’t say which studio has taken notice, yet.

As for advice for aspiring writers? Keep at it, and take time to develop your voice and learn story arc and structure.

“So many writers just rush into it,” she said. “Be patient, and give it time.”

Other advice she gave to young writers: Make sure you’re writing the best thing you’re capable of writing. Find trusted critics. And finally, believe in yourself, and your dreams.