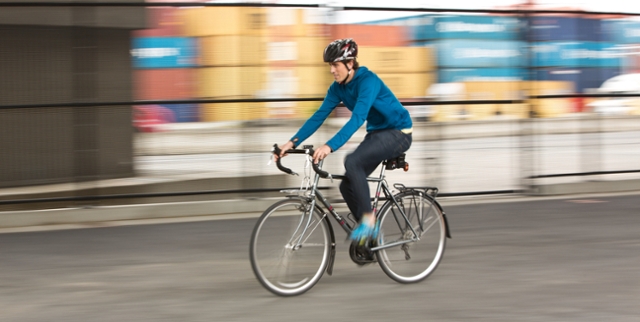 On June 18, Benjamin Rasmus ’06 began a cross-country bike ride to bring awareness to the issue of hunger and food waste in the U.S. (Photo: John Froschauer/PLU)

Benjamin Rasmus ’06 plans to put some major miles on his bike—3,500, to be exact—as he rides cross-country to promote awareness of hunger in the U.S. as well as locally grown food sources.

Rasmus, who works as the Harvest Against Hunger program manager, began his ride June 18 in a parking lot across from Safeco Field. He then will swing onto the Green River Trail and begin his cross-country journey, which will take him through about a dozen states and eventually end up Aug. 27 in Washington, D.C. He’s hoping to shake the hands of some rather famous people—including Warren Buffett and his son, Howard, as well as Michelle Obama, all of whom have taken up the cause of healthy food and hunger.

After living in China for about a year after graduating from PLU, Rasmus returned to the Seattle area through the AmeriCorps VISTA program, working at First Harvest as a VISTA member, and then as a full-time staffer for the last four years.

Rasmus’ job involves connecting local farms with food banks, so all can benefit from harvesting crops that otherwise would go to waste. There are eight project sites in Washington, which involve 10-20 food banks each, and about 200 small farms, he estimates.  During the last five years, more than 3 million pounds of food has been diverted to food banks. But hunger is still a problem, both in the state and nationally.

“There is still a tremendous amount of opportunity and need here,” Rasmus said.

The idea for a cross-country bike ride to raise awareness started off as a bit of a joke and a dare two years ago, said the whippet-thin Rasmus. A co-worker dared Rasmus to ride around some sites he usually visited in Washington, encompassing 850 miles in all. After this ride, Rasmus considered the cross-country ride and decided, why not?

So the idea was born to bike from Seattle to Washington, D.C., and use the ride as a way to raise awareness about the amount of food wasted in the U.S. (130 billion pounds annually) and the fact that in a country of great wealth, some 50 million people go hungry or lack reliable access to food. Rasmus’ ride also will highlight the gleaning movement that is growing across the U.S., with major stops in Denver, Chicago, Cleveland and Pittsburgh. Rasmus’ girlfriend and partner in food activism, Heather Hoffman, will be making the ride with him.

Family and friends will keep him company along the way as he treks his way through 12 states. His father plans to join in in the last leg into Washington, D.C.