Pacific Lutheran University has been named one of the top Military Friendly® private universities in the country for the sixth year in a row. 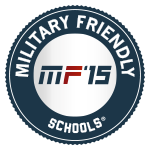 nationwide that are doing the most to embrace military students, and to dedicate resources to ensure their success in the classroom and after graduation.

PLU has earned the designation every year it’s been awarded.

“Today, PLU is home to more than 150 students who have come here after a term of service to the nation—some to study and then return to the military with new knowledge and skills, others in the midst of their transition to civilian lives—and others still who are the dependents of military veterans,” said PLU President Thomas W. Krise, who served 22 years of active duty in the U.S. Air Force, retiring with the rank of lieutenant colonel. “We are eager to grow our ranks of military-affiliated students because we know the value that these students bring to the classroom and the community. We understand that it’s not about starting over; it’s about adding to an already experienced person and creating a resume that stands above the crowd.”