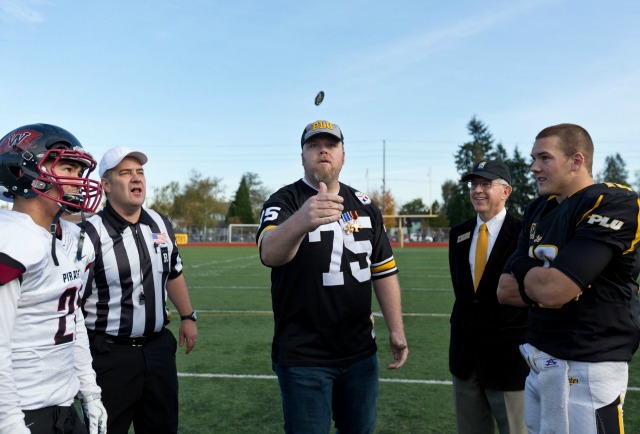 Steve Shumaker, a Political Science major at PLU who served in the U.S. Army for 12 years, tosses the coin at the Nov. 8 Military Football Game at Sparks Stadium in Puyallup. (Photo: John Froschauer/PLU)

TACOMA, Wash. (Nov. 6, 2014)—Steve Shumaker grew up with five brothers and joined the Boy Scouts. Over the years, Shumaker’s dad, also his Scout leader, had instilled a strong sense of patriotism. So after the attacks of 9/11, like many from his generation, Shumaker responded immediately by enlisting in the military.

U.S. Army veteran Steve Shumaker, now a junior at PLU, will conduct the opening coin toss at the PLU Military Football Game on Nov. 8 and will speak at PLU’s Veterans Day Celebration in Lagerquist Concert Hall on Nov. 11. Please see this link for a full listing of Veterans Day activities at PLU.

Working in aviation as a Black Hawk helicopter mechanic crew chief, U.S. Army Sgt. Shumaker interacted directly with soldiers in the field, transferring them in and out, bringing supplies and locating enemies from the air for the front forces. He was part of history.

“I wanted to be able to have the biggest effect possible,” said Shumaker, 38, who’s now a junior studying Political Science at Pacific Lutheran University. 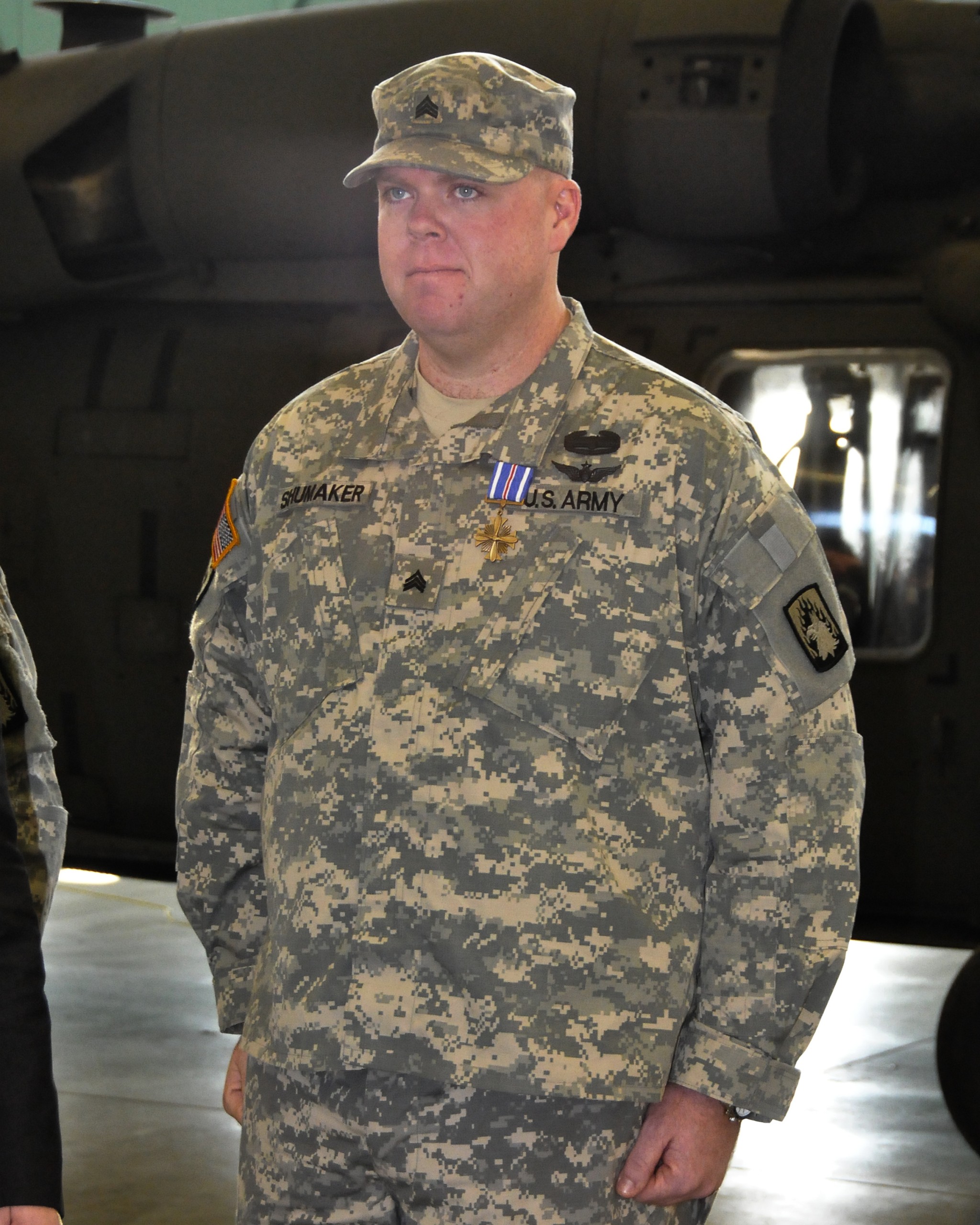 Shumaker, a father of four, will conduct the coin toss at PLU’s Military Football Game on Nov. 8 and will speak at PLU’s Veterans Day Celebration on Nov. 11 in Lagerquist Concert Hall.

During his time in the military, Shumaker was deployed four times: twice to Afghanistan and twice to Iraq. He flew for 1,800 hours in combat and received two distinguished combat medals: the U.S. Army Distinguished Flying Cross, awarded when one distinguishes himself in support of operations by “heroism or extraordinary achievement while participating in an aerial flight,” and the Gold Cross of Honour, Germany’s equivalent of the Medal of Honor. The Gold Cross medal is one of Germany’s highest awards for valor, and only a few have ever been awarded—never before to someone from a foreign military. Shumaker earned these medals after he and members of his medevac team rescued 11 wounded German soldiers from an attack by Taliban fighters in 2010. The firefight was described by one German newspaper as a bullet storm.

Shumaker retired from the military in 2013 and says that during his 12 years of service, each deployment was an experience of its own.

“Those are significant life events,” Shumaker said. “When you are saying goodbyes to your family for a year or more, it really sticks in your head.”

The most memorable event of this deployment, Shumaker recalled, was an assignment on the day Afghanistan held its very first presidential election: American forces were there to help provide security for voters and to protect the election process from disruption by Taliban fighters.

“We would always joke on a regular basis, ‘Oh, we are going to preserve democracy today,’ but on that day, I really felt like we had,” Shumaker said. “That was a really special day for me.”

While he was deployed, Shumaker’s second daughter was born. “It was harder on my wife, but she got through it,” Shumaker said. “She was one of my heroes.”

Similar to his first deployment, Shumaker worked in the Assault Helicopter Unit Battalion, in charge of moving people and equipment from place to place. Two months after Shumaker returned home from Iraq, he relocated to Germany, along with his wife and two children. They arrived in Germany in January 2009, but shortly after, he was deployed to Iraq again.

As Shumaker stayed in Iraq with American troops, they received notice that they needed to pack up and move to Afghanistan due to the 2009 troop surge. After President Barack Obama increased the number of U.S. troops in Afghanistan, Shumaker was among 99,000 troops sent there to strengthen the country’s security.

On Shumaker’s last deployment; he joined the Medical Evacuation helicopter team, which was to respond to all requests within 15 minutes.

It was during this deployment that he and 13 crewmembers earned Germany’s Gold Cross of Honour, for rescuing German soldiers during an eight-hour battle in the north of Afghanistan.

“On April 2, 2010, Good Friday, I woke up and could hear gunfire,” Shumaker recalled. He learned later that a patrol of 40 German Infantry soldiers had been ambushed by more than 200 Taliban fighters while driving through Isakhel, a few kilometers from his military base.

“Right off the bat, they had injuries that required medical evacuation,” he said. “But it was kind of a long story of frustrated attempts to go and land and get the patients.”

While German evacuation helicopters were allowed to land only in safe areas on a rescue mission, Shumaker said, U.S. forces could land wherever the patients were, even in the battlefield. “We had told them, but they didn’t quite believe us,” Shumaker said. “When we landed in the middle of the gunfight to rescue the injured, they were astonished.”

Shumaker and his crew rescued 11 German soldiers; eight were injured, and three later died. German forces said it was their biggest battle since WWII, and the first time they had soldiers evacuated under direct fire. The medals awarded to Shumaker and his crew showed not only the German military’s gratitude but also its highest respect to the U.S. soldiers who had risked their lives on the rescue mission. The U.S. government awarded the soldiers the Distinguished Flying Cross.

Asked what he was thinking during that mission, Shumaker said, “To be honest, my intent was to rescue those soldiers or die trying. I don’t know how to say this without sounding like I am bragging for myself; I only did my job.”

When Shumaker returned from his fourth deployment, his back injuries, the result of a training accident in 2003, became a burden. In September 2010, he switched to a desk job, mainly doing inspections for aircraft safety, until his medical condition forced him to retire.

Shumaker said he came to PLU because of its Pre-Law Advising program. Shumaker hopes to become a civil-rights lawyer. In the meantime, he carries at least one copy of the Constitution with him wherever he goes.

“I am a Political Science major, and I just have really learned to love that document,” he said. “Because it protects us from government, from tyranny and from each other.

“Five years from now I should be finishing law school,” he laughed. “I hope to get a job where I can continue defending the Constitution.”