TACOMA, WA (Jan. 20, 2015)—The Pacific Lutheran University Wind Ensemble is heading South this month to perform four concerts in Tennessee. The tour includes performances in Nashville on Jan. 23 and 28, Chattanooga on Jan. 25 and Knoxville on Jan. 26. Shortly after returning to campus, the ensemble will perform on Feb. 5h at Lagerquist Concert Hall.

The 47-student ensemble will perform an exciting repertoire of compositions, including For Those Who Wait, a commissioned work by nationally acclaimed PLU composer Dr. Gregory Youtz that will premiere on the three-stop tour of Tennessee. For Those Who Wait was written in response to the many thousands armed service members returning home wounded, physically or psychologically, after tours of duty in the Iraq and Afghanistan wars.

While much attention has been devoted to the heroism of those veterans, Youtz wanted to shine a light on those who wait at home. “I tried, in this piece, to capture the experiences of friends and students of mine in the position of waiting—from the times when anxiety is just a general background worry, only half-conscious in the mind, to those dark nights of the soul when fear overtakes everything. And through it all, there is nothing to do but to wait and hope,” Youtz explains.

The commissioning of For Those Who Wait involved a very unique experiment. Leveraging the national reputations of both Youtz and PLU Director of Bands Dr. Edwin Powell, as well as the PLU Wind Ensemble’s reputation for commissioning and performing new works, more than 60 schools, ranging from large universities to local high schools, funded the composition.

Once the new work is performed by the PLU Wind Ensemble, then all 60 investing schools will perform it as well. Youtz says many small universities and high schools with modest budgets jumped at the rare opportunity to be a part of funding an original piece.

“We pitched to them that it would cost the same amount of money it does to license a score and parts which most bands do each year,” Youtz explains. “We asked that, this year, instead of sending that money to a publisher and getting something that already exists, how about sending it to a composer and helping to create a new piece of music?”

The trip to Tennessee will be a homecoming of sorts for at least one Lute musician: Former Co-Director of University of Tennessee’s “Pride of the Southland” marching band, Powell will be conducting the Wind Ensemble. Powell, also a Professor of Music, is well-known in Tennessee, having taught conducting courses and music-education methods at the University of Tennessee in Knoxville. In addition to co-directing the marching band while at UT, he also served as Assistant Director of Bands and was responsible for the Symphonic Band.

“It’s exciting to return to Tennessee ,where I spent five years before I came to PLU,” Powell said. “I look forward to reconnecting with colleagues and many former students while I’m there and, of course, sharing the talents of our students at Pacific Lutheran will be a treat.”

The Wind Ensemble tours domestically and internationally, representing a dynamic Department of Music comprised of 200 music majors and 400-500 music program participants each academic year. Most recently, the ensemble toured in Australia and China.

Other selections scheduled to be performed by the ensemble at its upcoming 5 shows include Four Scottish Dances by Malcolm Arnold,  Two Lane Blacktop by James David and the Persichetti Symphony. 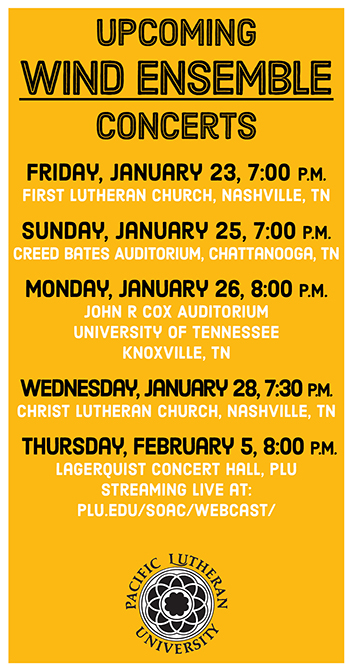