TACOMA, Wash. (Sept. 15, 2015)—As Hispanic Heritage Month kicks off across the country on Sept. 15, this year’s observation at Pacific Lutheran University takes on extra emphasis with two new campus-wide components:
• the revival of a student organization representing Latino/a and Hispanic students, and
• the inauguration of an annual Latino Studies Lecture at PLU. 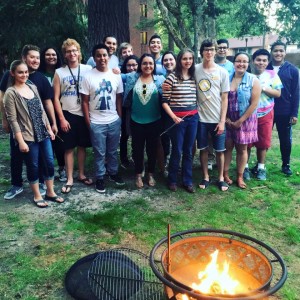 Amigos Unidos held a bonfire Sept. 11 at Stuen Hall to welcome new and returning Lutes and to introduce them to faculty and staff. (Photo courtesy of Amigos Unidos)

Over the summer, Sociology major Ashley Carrasco ’17 worked with Resident Directors Luke Ruiz and Ángel de Jesus Gonzalez to revive the student organization formerly known as Latinos Unidos. Carrasco said they decided to change the name to Amigos Unidos to make the student-run group more inclusive for Lutes who might not identify as Latino/a.

“Amigos Unidos seeks to empower the Hispanic/Latin@ student population for the purpose of providing scholarly support, cultural awareness, social enrichment and community outreach,” said Carrasco, the group’s student president. “Not only are we planning events that celebrate our heritage, but we are also focusing on supporting students to succeed academically by having club study hours at the library and connecting them to resources and faculty on campus.”

The group kicked off the school year with “Bienvenida: Latin@ Family Session,” a special Orientation session in Spanish that welcomed parents of incoming Lutes. Amigos Unidos also hosted a table at the Sept. 11 Involvement Fair and held a bonfire that evening at the Stuen fire pit to welcome new and returning Lutes and to introduce them to faculty and staff.

“Through this student organization, we hope to create a support system that will make our club members feel like they have a familia away from home and will help students to not only be proud of their heritage but help them succeed as scholars,” Carrasco said.

Amigos Unidos has a Facebook group, PLU Amigos Unidos, and its weekly meetings begin Sept. 18 at 12:30 p.m. in the Stuen Lounge. Other planned events for Fall, in collaboration with the Diversity Center, include the Latino Youth Summit on Oct. 3 and a Día de Los Muertos celebration on Nov. 1.

Last spring, PLU was invited to partner with the Tacoma Art Museum, Centro Latino and the University of Puget Sound in applying for the Latino Americans grant from the American Library Association and the National Endowment for the Humanities (NEH). 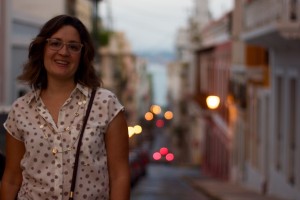 In a letter of support for the grant partnership, Assistant Professor of Hispanic Studies Emily Davidson proposed to inaugurate (and institutionalize) an annual Latino Studies Lecture at PLU.

The Tacoma partnership was awarded a $10,000 grant, whose mission is to:

With its $500 share of the grant, PLU will debut the first annual César Chávez & Dolores Huerta Latino Studies Lecture, with a film screening and panel discussion of the documentary The New Latinos (1946-65) from Latino Americans: 500 Years of History at 6 p.m. Oct. 13 in Chris Knutzen Hall.

“The groundbreaking PBS series Latino Americans is part of an NEH initiative, ‘The Common Good: The Humanities in the Public Square,’ whose goal is to promote knowledge about the history and contributions of Latinos in the United States,” said Davidson, who will serve as a panelist at the discussion-style event along with PLU Associate Professor of Hispanic Studies Carmiña Palerm and Associate Professor of Political Science María Chávez.

The lecture is named after César Chávez (1927-93), founder of the United Farm Workers of America, and labor leader and civil-rights activist Dolores Huerta (1930-) because of their important roles as leaders in the Latino/a civil-rights movement. Chávez came to PLU in March 1989 after a 36-day water-only fast designed to bring attention to the unsafe use of pesticides in fields and their dangerous impact on farmworkers and consumers.

“Dolores and César’s commitment to social-justice issues, advocacy for underrepresented communities and care for the environment is a genuine embodiment of the PLU mission statement,” Davidson said.

Do you know your U.S. Latino history?

As partners in the prestigious Latino Americans: 500 Years of History* grant, PLU will join universities and community organizations across the nation in the effort to celebrate and promote the untold stories of Latino/as in the United States.

Please join us Tuesday, Oct. 13, at 6 p.m. in Chris Knutson Hall for the 1st Annual César Chávez and Dolores Huerta Latino Studies Lecture. The evening will include a film screening and discussion about The New Latinos (1946-1965) from the documentary series The Latino Americans: 500 Years of History.

Refreshments with be served!

PLU’s Visiting Writers Series will host author and activist Stephanie Elizondo Griest (Mexican Enough: My Life Between the Borderlines) on Sept. 24, and PLU’s Office of Admission will hold a Latinos Unidos @ PLU event on Oct. 3 in collaboration with Amigos Unidos and the Hispanic Studies program.

On a related note, Associate Director of Admission Emily McCann said Davidson also is teaching a new Spanish language class series (HISP 251-252) for heritage speakers, designed to affirm and build on the language abilities of students who grew up speaking Spanish but may not have had the opportunity to study it formally. Due to its focus on the inherent relationship between language and identity, and Latino/a experiences in the United States, the course fulfills the “Alternative Perspectives” General Education requirement. The second course in the series, HISP 252, can be applied to a Hispanic Studies major or minor.

“It’s a great way to honor the diverse backgrounds of our students,” McCann said.