TACOMA, WASH. (December 23, 2015)- On Wednesday, Dec. 16, Pacific Lutheran University students presented representatives from the Wounded Warrior Project a check for $500 — revenue from a small business venture the students launched as part of the PLU School of Business’ intensive course on entrepreneurship.

According to Assistant Professor of Business Kory Brown, the undergraduate course is all about “learning by doing.” Nearly every lesson throughout the semester was applicable to the small business ventures students worked together to launch.

Working in groups of 5-6, students created, marketed and sold a wide variety of products including a fantasy football themed board game, a stacking game similar to Jenga, t-shirts raising awareness about natural disasters and a cooking paste for Latino food.

Every group was enrolled in the “Online Venture Challenge,” a nationwide program that requires student teams to start real online businesses that compete for 30 days to raise money for charity.

Composed of Jillian Stanphill ‘16, Freddie Fisher ‘16, Liandra Daniels ’16, Bree Watkins ’16 and Justin Lee ’16, the group that generated the most revenue created a line of scented candles.

“Using themes that are unique to this area, like Mt. Rainier and evergreen (trees), we created scented candles that portray the Pacific Northwest,” Stanphill said.

The group, which named their business “Northwest Trade: Proud Supporter of the Wounded Warrior Project,” leveraged personal connections to sell a total of 203 candles both individually and wholesale.

Fisher and Lee work at PLU’s Garfield Book Company, and Daniels and Stanphill work at the Old Main Market in the Anderson University Center. They were able to negotiate arrangements with their respective store managers to sell Northwest Trade candles at both establishments.

Northwest Trade’s largest candle buyer was Joint Base Lewis-McChord’s 627 Security Forces Squadron. The connection between the business students and the squadron was forged by Watkins’ husband, an active duty member of the Air Force.

The squadron purchased Northwest Trade’s candles at wholesale price and then resold them to raise money for its annual military ball.

All five students who worked together on Northwest Trade have either a family member or good friend in the military, so when Watkins suggested they consider the Wounded Warrior Project the vote was unanimous.

“I work for Social Security, so I help people apply for disability benefits,” Watkins explained. “Wounded Warriors is able to do a lot of really cool things that normal disability programs don’t. It’s a really inspirational program.”

Originally from Raymond, Wash., Watkins is attending PLU thanks to the G.I. Bill and works on base at JBLM. She is also an active member of the PLU Military Club. 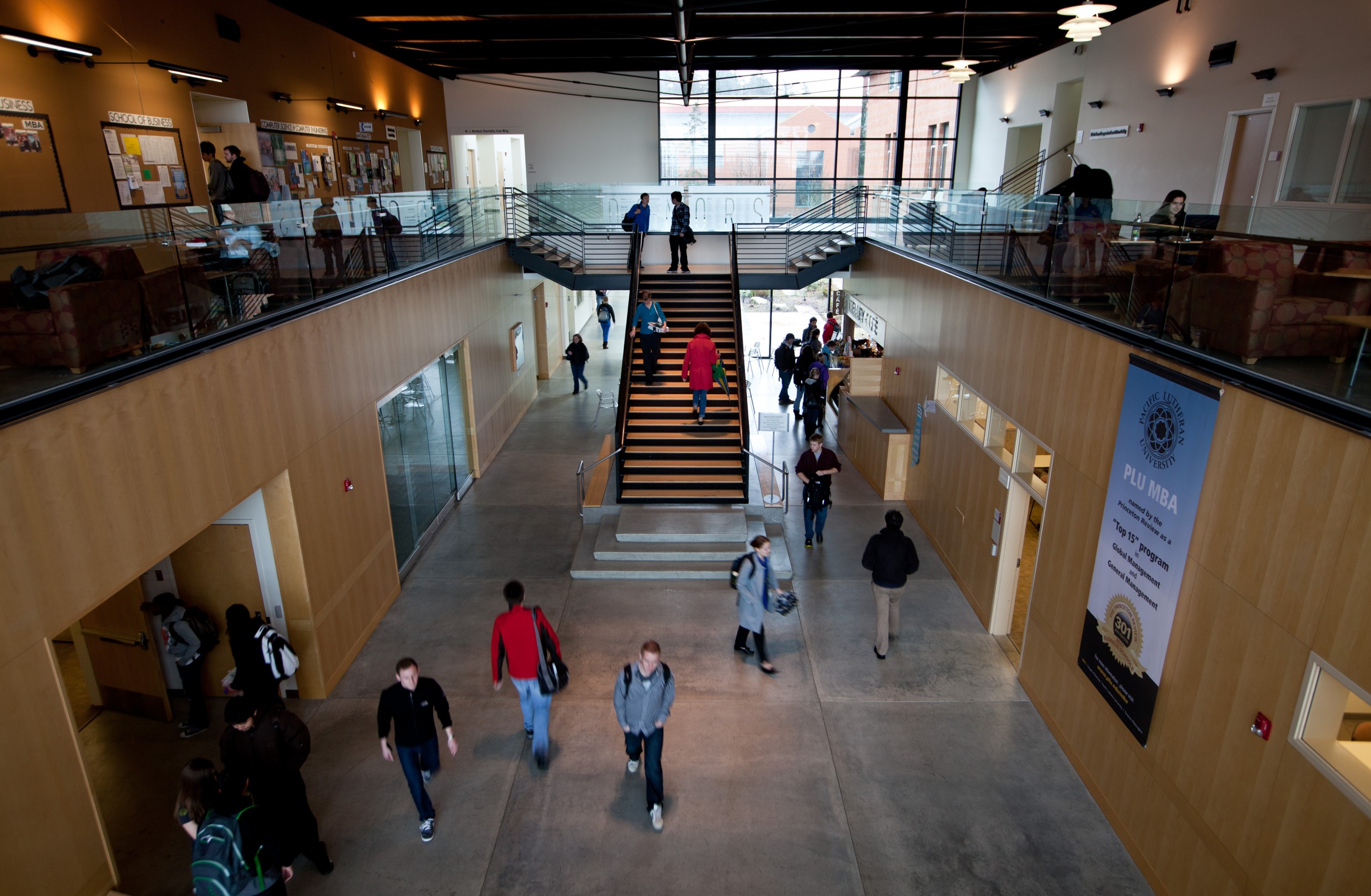 Course Description: Intensive study of issues and challenges associated with start-up, growth, and maturation of a new enterprise. Emphasizes reduction of risk through planning for and assessing possible future conditions.

“I think that it was really valuable. In a normal entrepreneurship class you would just make your business plan or business model, but we actually created a product and sold it for real money and got to dive into the real world.”
–Nikolai Berge ’16

“It was really cool, it wasn’t like any other class that I’ve taken. It was more outside-of-class intensive — you had to really rely on your group and get it done yourselves.”
-Kyler Blades ’16

“The fact you had to go out and talk to people and use your hands to make the product yourself was a totally different way of doing a business class.”
-Patrick Domino ‘16

“It gets you past your fear of launching a business because you don’t know if people are going to like what you’ve created or not.”
-Dieu-Merci Lubiba ’16

After graduating this spring, Watkins plans to utilize her business degree by transferring to the JBLM office of the Army’s Department of Behavioral Health. She hopes to serve as an administrator working on marketing and outreach to service members about the mental health resources available to active duty and veteran members.

Other members of Northwest Trade aspire to own and invest in small businesses (Daniels), practice corporate law (Stanphill) and work in market research (Fisher). Lee has yet to decide what area of business he’d like specialize in. He has been accepted into PLU’s Master of Business Administration (MBA) program and will begin graduate coursework this fall.

The group says they are not sure what’s next for Northwest Trade, but they are exploring their options.

“The business’ future is up in the air,” Fisher said. “We’re debating whether or not to participate in the business plan model competition this spring at PLU.”

PLU graduate student Krista White has been awarded the Puget Sound Business Journal Women of Influence Scholarship. A student in PLU’s Master of Science in Finance program, White will be awarded $7,500 by the publication.

The ‘Best 295 Business Schools’ rankings were created using a survey of more than 22,000 students from business schools across the country to determine the best places to earn a Master of Business Administration.

PLU Assistant Professor of Business Ufuk Ince, CFA, has been elected president of the CFA Society Seattle for the 2015-16 term. Ince and his team will lead the 980-member organization in its mission to advance the investment profession in the Puget Sound region in technical competence and professional integrity.