By Rob Wells
Director of the Center for Media Studies

Joshua Wiersma ’18, who served as assistant editor and video journalist on the film, said the award is extremely gratifying. “Winning a National Broadcasting Society Award is great news for us,” said Wiersma. “My fellow filmmakers and I worked hard to make the documentary thought-provoking and influential. So, it’s a great feeling to be acknowledged with such a prestigious national award.”

Changing Currents explores the many challenges facing waterways across North America, more than half of which are contaminated and unfit for drinking, fishing or swimming.

During production of the film, the researchers conducted dozens of interviews, meeting with average citizens, officials from the U.S. Environmental Protection Agency, water utility experts, members of Native American and Canadian First Nations tribes, and many other public and private organizations. 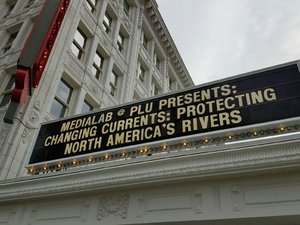 MediaLab seeks to create high–quality content and services for community partners such as not–for–profits, media outlets, government agencies, and other organizations, while simultaneously providing pre–professional opportunities for talented and capable PLU students.

This National Broadcasting Society award adds to several other recognitions received so far by Changing Currents, including six Accolade Awards of Merit and a Mercury Design Award for the graphics and branding associated with the film.

Since its establishment in 2006, MediaLab has received more than three dozen other national and international recognitions, including five Emmy nominations and one Emmy win.

The National Broadcasting Society – Alpha Epsilon Rho, is a student and professional society of more than 85 chapters on college, university, and community college campuses.

For more information about Changing Currents, or other MediaLab projects and productions, please visit: www.changingcurrentsdoc.com or www.plu.edu/medialab, or call Rachel Lovrovich at 253-459-9229, or email lovrovrp@plu.edu.