Image: Cate Rush ’19 and Austin Beiermann ’18 were named Peace Scholars for 2017. Rush and Beiermann will leave June 17 for a seven-week program in Norway. (Photo by Molly Ivey ’20)

TACOMA, WASH. (April 17, 2017)- The last time anyone from Austin Beiermann’s family left the country, it was to fight in a war. This summer, he is going to do the exact opposite. “I am going to build peace,” Beiermann said.

Beiermann ’18 will join Cate Rush ’19 for a seven-week peacebuilding experience in Norway as part of Pacific Lutheran University’s Peace Scholars Program. They will learn peacebuilding skills and practices at a weeklong workshop in Lillehammer, along with 16 other students from Lutheran universities across the U.S. Then, they will spend six weeks at the International Summer School, part of the University of Oslo, with students from around the world.

This is the fifth batch of PLU students to attend the international program. They leave June 17.

Beiermann is majoring in politics and government, as well as economics. Traveling with Campus Ministry to the Lutheran Vocation Conference in the fall inspired him to apply for the Peace Scholars Program.

“Something that stuck with me from the conference was, when people have deeply rooted values and there are tensions between them, how do you handle that?” he said.

This has become an important question for Beiermann, who hopes to go into state politics.
“How am I able to represent these people who may not want to talk to me, or when they do they have staunchly different values?” Beiermann said. “That’s why I applied.” 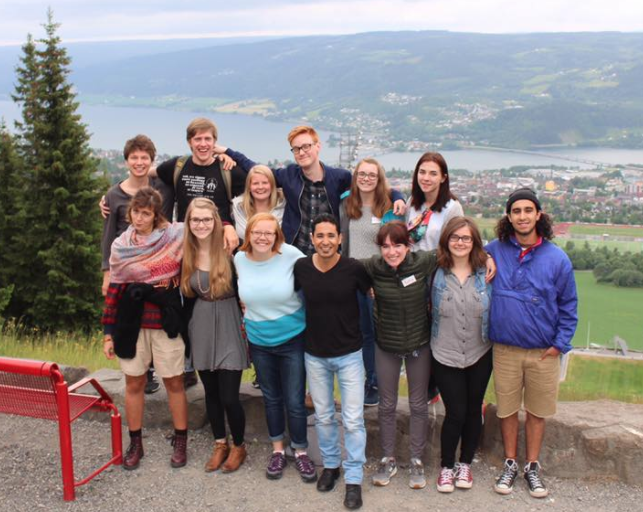 Learn more about the program and past participants

Rush, a nursing major, says the experience gives her an opportunity to experience study away despite her difficult schedule. Her rigorous nursing courses and clinical hours make it difficult to travel abroad. The Peace Scholars Program touches on her interest in nursing and peacebuilding, and its summer schedule was perfect timing.

“I’m interested in how can nurses play a role in peacebuilding,” Rush said. “Nurses have this rapport in a community already. They are there to help that community heal and how can they transition to a peacebuilding role?”

Rush, who is from Colorado, found herself at PLU through a series of random college applications.

“I really connected with PLU’s mission of sustainability, justice and diversity,” Rush said. “When I read the mission statement I thought ‘wow I really relate to this.’”

Beiermann and Rush were chosen from a group of nine students. Ksenija Simic-Muller, program director and assistant professor of math, said the choice was challenging.

“We all thought as a committee that anyone of the applicants could have done it and represented PLU very well,” Simic-Muller said. “But Austin and Cate have different backgrounds and different interests and I think they will complement each other very well.”

The two will be spending a lot of time together as they travel around Norway. They each have a research project to complete during their time with the International Summer School, where they will study with students from 80 countries around the world.

The global connection was one of the highlights for Peace Scholar alumna Ellie Lapp ’17.

“A casual dinner conversation or walking down the hallway can be more like cultural experiences and experiences of diversity,” Lapp said. “These are really deep conversations you can’t have anywhere else. It is just such a special place.”

For now, Beiermann and Rush will revel in the news and prepare for a summer abroad.

“I’m so excited,” Rush said. “I’m so honored. It felt like a long shot when I applied.”

After finding out the news, Beiermann immediately called his family.

“This not something we have really experienced — leaving the country like that,” he said. “I am so excited.”

Right: Last year, PLU’s Peace Scholars took some time out of their studies and research to film some of their experiences exploring downtown Oslo and Norway’s southeastern coast. Watch what Ariel Wood ’17 and Theo Hofrenning ’17 captured.