TACOMA, WASH. (Jan. 25, 2018)— As a resident assistant in Harstad Hall at Pacific Lutheran University, Tegan Mitchell ’18 hosts events, conducts regular check-ins and is a general resource for the residents who live in her wing.

“But on a daily basis I really only see my residents coming to and from the bathroom,” Mitchell said.
So it can be hard to know when somebody is missing class, or sleeping through exams, or struggling in ways Mitchell doesn’t see.

The Student Care Network, or SCN, is an online case-management system designed to connect students to resources, help them navigate higher education and increase care for Lutes across campus. The system uses care forms, submitted on behalf of students, to help staff work with those students and better meet their needs.

It aims to flag students who may be vulnerable to common pitfalls that jeopardize success throughout the college experience. For example, the SCN is designed to connect a student with a tutor after the student fails a test, instead of waiting until the same student fails a class. The focus is proactive rather than reactive. 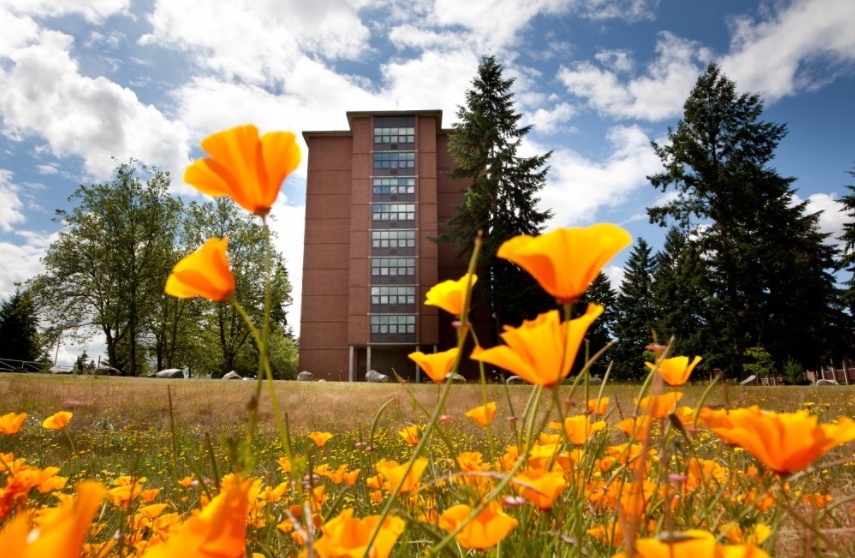 Learn more about the SCN mission or submit a report

“Oftentimes these are students who haven’t had experience with reaching out and asking for help for themselves,” Mitchell said. “And much of the time that is because they haven’t had those resources available to them.”

SCN helps students on multiple levels, from those who may suffer from diminished mental health to students struggling with academics, and everything in between. Issues that arise could include a death in the family, sleeping through a lecture, failing a class or financial aid worries.

In an era when mental health is a top concern for universities, SCN has found that many students who are reported for a singular, minor issue actually have a much more complicated need for care.

Eva Frey, dean of students, says the system allows faculty members, administrators and others to acknowledge that students are seen and ask how they’re doing, without shaming them.

“I think our faculty, administrators and students have learned that it feels really good when somebody cares,” Frey said.

"I think the Student Care Network in general is really good at working with students to give them a very realistic picture about themselves and their future and where they are at right now. And then we put all those pieces together for them."- Connie Gardner, director of Student Rights and Responsibilities

And the results from the system’s first semester are staggering. By the end of fall 2017, SCN received 717 reports on 558 unique students — about 20 percent of PLU’s undergraduate population. The majority of reporters were faculty, reporting mostly on first-year and senior students. The cases were split roughly down the middle between academic and psychosocial concerns.

Prior to SCN, the university used a system called Student Alert, which primarily focused on students’ academic issues. This narrow scope kept the numbers low, Frey said, so administrators were unsure how effective SCN would be.

“At the start of the year we thought we would get maybe 200 reports,” she said. “But on a regular basis I am surprised by the quantity of the need for care.”

At the same time care-form submissions exceeded expectations, student-conduct cases dropped dramatically. In fall semester 2016, 124 students representing 58 cases passed through the conduct system — the process that examines alleged violations of the university’s policies. In fall 2017, that number fell to 59 students and 33 cases.

“The Student Care Network is living our mission statement in a 21st century way,” Frey said.

SCN is an online system that starts when a concerned party — a friend, parent, coach, faculty member — files a report. That report is catalogued and distributed to a so-called “super care manager,” such as Connie Gardner, director of Student Rights and Responsibilities. Gardner will reach out to the students and help connect them to resources, or simply listen.

“I think the Student Care Network in general is really good at working with students to give them a very realistic picture about themselves and their future and where they are at right now,” Gardner said. “And then we put all those pieces together for them.”

In many cases, care managers coach students through the higher education process, including picking the right classes, working through challenging courses or helping them reimagine their major or career.

“What do you do when your dream job is nursing, you can’t pass biology 205 or you don’t want to pass biology 205?” said Kris Plaehn, senior advisor and director for retention. “There are all sorts of other options that we talk them through.”

Care managers stress that a student’s struggles may not be exclusive to academics or mental health alone.

Student care by the numbers:

“Think about why that student failed that midterm. Because when we call them in and chat with them, it becomes psychosocial and it is all intertwined,” Gardner said. “There is rarely a time when it is solely one thing going on in a student’s life.”

Mitchell said student care will be more effective the more professors, staff and leaders on campus understand the common struggles of students — and understand the value of using SCN to address those struggles.

She’s using the new resource as a catalyst for one-on-one conversations with the residents she serves. And she’s getting positive results.

“I really appreciate it because bringing these concerns to the student is really uplifting and comforting,” Mitchell said. “It shows that someone is really caring about them and looking out for them and noticing that maybe things aren’t going so well right now.”