Image: Gracie Anderson ’21 speaks during a rally regarding gun violence on March 14 in Olympia. (Photo by John Froschauer/PLU)

The Pacific Lutheran University student addressed a crowd of roughly 100 community members for the “Will Washington Be Next” rally protesting gun violence on March 14. Her mother passed out posters on the sidewalk. Her father stood on the capitol steps with the crowd. Her sister read a poem.

“All of us are personally affected by this,” Anderson said. “All of us are in schools and on school campuses every day, so it’s a family gig. But also a family fear.”

Anderson, a first-year student at PLU, created “Will We Be Next,” the student movement meant to raise awareness of the threat of gun violence in Washington schools. Anderson led a group of students, from local middle schools to colleges, to rally for the National School Walkout on the steps of the state Capitol building.

Anderson’s family is familiar with education politics: her mother is a mental-health counselor in Lewis County schools, her father is a middle-school principal, and her younger sister is a freshman at Olympia High School. 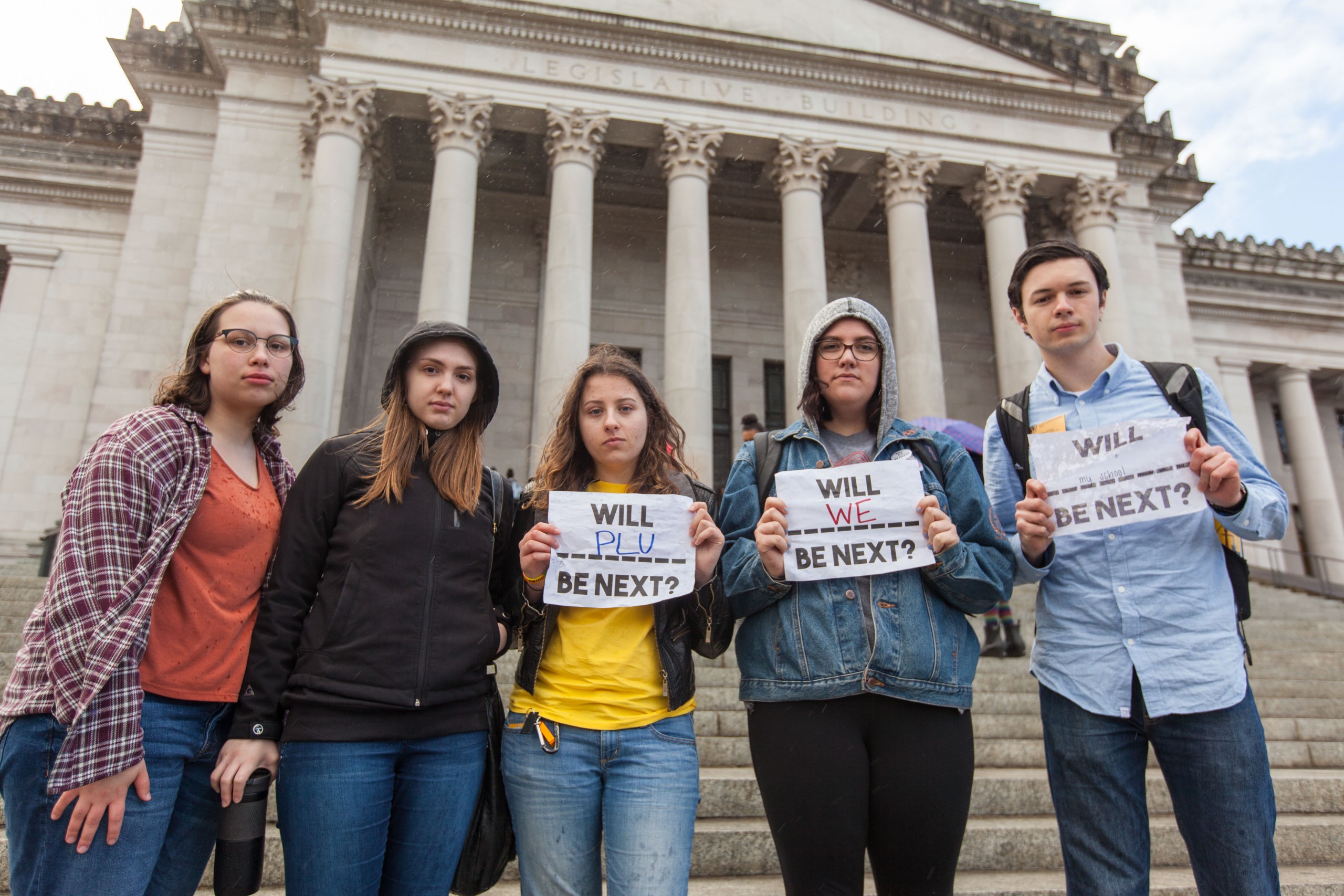 Learn more about the awareness campaign centered on gun violence

And after the Feb. 14 shooting in Parkland, Florida, during which a single gunman claimed the lives of 17 high schoolers, Anderson was numb. The reaction was striking because of her family’s strong involvement in the education world.

“I noticed I was desensitized to what was going happening” she said. “It was a major red flag for me.”

Anderson read the stories of the 17 victims, all students close to her age. She realized she had to do something. She snapped a few pictures in the Mortvedt library — where she initially intended to study for class — and posted them to social media. Then, Anderson encouraged her friends to take pictures with paper signs, finishing the phrase “Will ____ Be Next?” And the campaign was born.

“We just did it,” Anderson said. “We took a couple pictures and it was not very well planned, because we didn’t think it would go very big.”

Anderson and others use social media and public rallies to spread the campaign’s message. “Will We Be Next” also has organized a task force of Washington youth to create policy recommendations for lawmakers. The bipartisan effort aims to provide a voice for all youth statewide.

"I was born the year of Columbine and so we’re all part of this generation that doesn’t know a world without these school shootings."- Gracie Anderson '21

The campaign has expanded from PLU to local high schools around the state, in part because of the connections Anderson has made in college. “When I was trying to get the campaign into other schools it was really easy to do it through my friends and have access to all kinds of schools across the state,” she said.

And there’s no slowing down for Anderson, who also serves on Resident Hall Council in Harstad — where she lives — in addition to serving as a senator in student government.

“But don’t worry,” she joked. “I’m getting eight hours of sleep a night.”

Unsurprisingly, Anderson is a political science major. She hopes to run for political office in the near future, hopefully in her home 22nd Legislative District in Thurston County.

“I’m just waiting for it to open up. I just love our state legislature so much,” Anderson said. “And I ran a campaign this summer for (Olympia) City Council so I have kind of an idea of how campaigning works and it would just be fun to try.”

Anderson’s credentials certainly are impressive. She is a member of the state Legislative Youth Advisory Council, she led a march for education funding, and she is known as a point-person for student activists in Olympia.

“My big thing has always been youth empowerment and empowering the youth voice, because I believe in it so much,” she said.

Anderson plans to continue with the “Will We Be Next” movement. This week, she and her mom are flying out to the national “March For Our Lives” event in Washington, D.C., the national protest against gun violence in schools. And Anderson is organizing another rally April 20 at the state Capitol, marking the 19th anniversary of the Columbine High School shooting that resulted in 15 deaths and even more injuries.

“I was born the year of Columbine and so we’re all part of this generation that doesn’t know a world without these school shootings,” Anderson said. “But we also don’t want our kids or our siblings or our nieces and nephews to grow up in a world like this.

“All these young people are going to run for office, they are going to vote. We are so civically engaged it’s insane and incredible,” Anderson said.

And you can bet her family, and their dinner-table breed of activism, will be with her along the way.