Four decades after studying broadcast journalism at Pacific Lutheran University, Morrison has amassed 40 regional Emmy Awards for his work producing “Front Runners,” a Seattle-based magazine show that featured people from around the world. It was nationally syndicated from 1991 to 1995, airing in more than 40 markets including New York, Los Angeles, San Francisco, Chicago, Philadelphia and Washington, D.C.

Morrison also has written music for more than 225 films and television shows, as well as a few jingles you’ve likely had stuck in your head before. (“Car Pros sells for less, C-A-R-P-R-O-S!” might sound familiar to anyone in the greater Tacoma area.)

“It all comes back to what people wrote the most often in my high school yearbook: ‘You’re a creative guy,’” he said. “So, I always tried to tap into my creativity. And as a result, I don’t really feel like I’ve worked a day in my life. I’ve always had fun doing what I’m doing.” 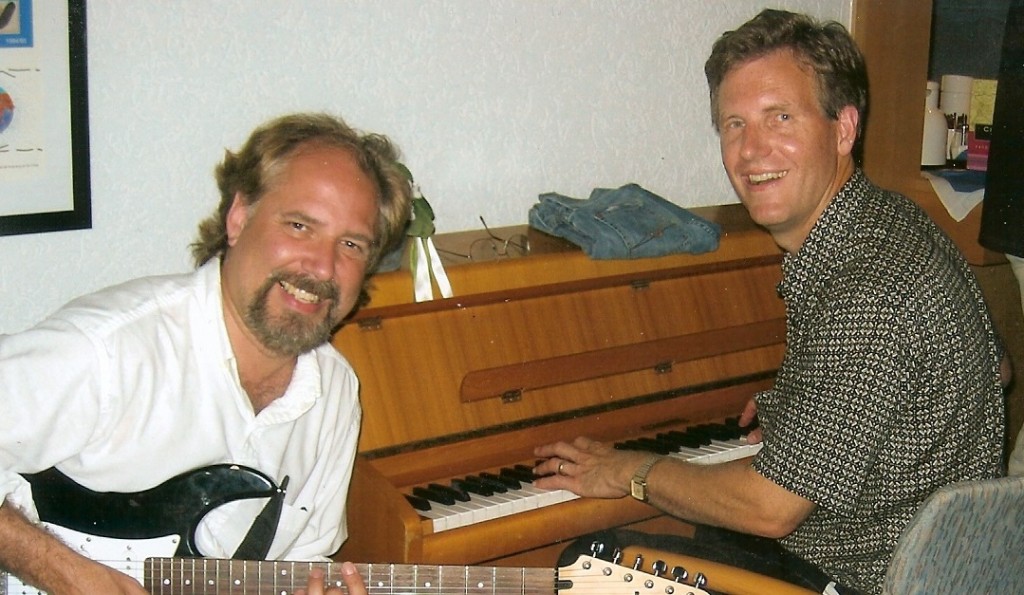 Ken Morrison making music with Mark Reiman, associate professor of economics at PLU, in Germany during a class trip in 2004. (Photo by Emily Sinn, courtesy of Zayas)

Morrison’s career started in local TV news, at Seattle’s ABC affiliate KOMO 4. In 23 years at the station, Morrison served as a nighttime switchboard operator, a production assistant for “PM Northwest,” an award-winning storyteller, a field producer and eventually an associate producer.

But “Front Runners” was the pinnacle for Morrison.

The show grew in popularity and became syndicated, an achievement usually reserved for television shows coming out of Los Angeles or New York City. Morrison played an essential part in the show’s massive success.

“Being the producer for ‘Front Runners’ was like coaching the all-star team,” Morrison said. “I had wonderful videographers, wonderful editors, wonderful associate producers. And together as a team, we did a great show. And individually, we did a lot of great stories. Surround yourself by talented people and let them do what they do.”

"I always tried to tap into my creativity. And as a result, I don’t really feel like I’ve worked a day in my life. I’ve always had fun doing what I’m doing."- Ken Morrison '79

Before entering the world of broadcast television, one of Morrison’s main interests was music. His father and grandparents were musicians who fueled his love of jazz. While attending PLU, that love for jazz led to his work with KPLU — the NPR station now known as KNKX — as an announcer. Morrison worked at KPLU while attending classes and was promoted to the station’s music director. This experience was highly beneficial for Morrison, who described the job as “a perfect situation for me.”

Morrison didn’t just broadcast music; he also created it. Alongside his college roommate Mark Reiman ’79, who later became an economics professor at the university, Morrison developed a song called “Lucky Me,” which was placed in the Oscar-nominated movie, “The Single Man,” starring Colin Firth and directed by Tom Ford.

Throughout his career, Morrison wrote and developed songs featured in some of the most popular television shows and films of our time: “Parenthood,” “The Middle,” “Boardwalk Empire,” “American Horror Story,” “Fargo” and many others. Morrison’s “I Can’t Help But Wonder” was placed in an episode of “Comedians in Cars Getting Coffee” — a show hosted by Jerry Seinfeld — featuring Barack Obama.

As for that Car Pros jingle that’s probably still playing in your head, it’s one of Morrison’s many creations for commercial advertising. Morrison, along with business partner David Ulfers, have developed commercials for myriad companies: restaurants, car dealerships, real estate agencies and more.