Image: Justin Huertas ’09 (center) performs in “Lizard Boy” at the Diversionary Theatre in San Diego. He wrote the musical for Seattle Repertory Theatre in 2015. Huertas is flanked by Kirsten deLohr Helland ’10 (right) and William A. Williams. The cast performed as a three-person folk rock band. (Photo by Simpatika, courtesy of Diversionary Theatre)

Applause roared when his castmate, Alexandria Henderson, walked on stage for the first time Saturday night. Sure, Elle Woods is a lovable lead character in a story about perseverance and optimism. But Henderson and Huertas, black and Filipino actors who are playing roles often played by white actors, gave the crowd new reason for excitement.

Showtunes’ take on the musical, he added, invigorates a story that was already an achievement in uplifting “otherness.” The storyline — a sorority girl’s journey at Harvard Law School, initially intended to win back an ex-boyfriend, that morphs into a triumphant journey of self discovery — takes on new meaning when performed by people of color.

“I am visibly brown. When I was younger, I thought that would limit the roles I would be considered for,” Huertas said. “We all deserve to be seen on stage in a variety of roles.”

When Huertas got the call to audition for Emmett, a leading role he always dreamed of amid his longtime “Legally Blonde” obsession, he was shocked and excited. “I never thought I’d get to play him.”

Once he started reading for the part, it became clear how important the new point of view was for the story.

“Emmett says something like ‘if you’re not born into privilege, you have to work twice as hard,’” Huertas said. “Putting us in those roles creates a whole new, deeper spin on this. What a way for the story to be seen. It’s beautiful.”

Huertas has been entrenched in the Seattle theater scene since graduating from PLU. His first show out of college was a production called “Speech and Debate” at the Seattle Repertory Theatre. 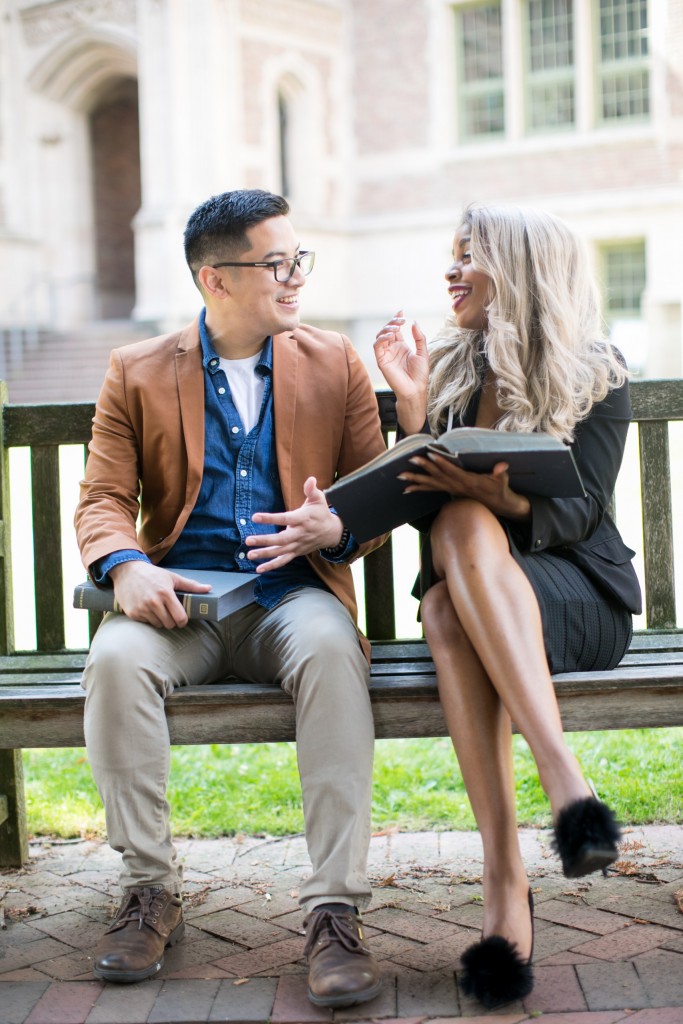 In 2015, he was commissioned to write his own musical for Seattle Rep, called “Lizard Boy,” after the artistic director saw him play the cello in a musical theater concert.

“It was the most of me I’ve ever put on stage,” Huertas said. “This was very much my words, coming out of my own mouth, playing my own music.”

Huertas credits the musical’s success to the desire for embracing otherness — similar to the show he stars in now. The superhero origin story, about a man in lizard skin who grew up insecure but learns to embrace his difference, resonates with people who feel vulnerable themselves.

"Putting us in those roles creates a whole new, deeper spin on this. What a way for the story to be seen. It’s beautiful."- Justin Huertas '09

“There was a lot for people to connect to,” he said.

During his time on campus, Huertas participated in all things theater. “The list is long,” he said, laughing.

He was involved in productions such as “The Laramie Project,” “Twelfth Night” and “Cabaret.” His senior project was music directing for “Company,” and he created a small musical theater concert called “Not Your Grandma’s Showtunes” along with Kirsten deLohr Helland ’10. (Helland also performed alongside Huertas in “Lizard Boy;” the third part in the cast — a three-person folk rock band — was played by William A. Williams.)

“A lot of us yearned for musical theater, so we created our own opportunities here and there,” Huertas said of his time on campus.

Huertas is thankful that he’s able to work in theater full time, holding a variety of roles throughout the productions he’s a part of.

He says musical theater is his true passion, combining everything he grew up learning: visual art, music, writing and acting.

“It’s the intersection of all the forms of art that I enjoy,” he said.