Image: Wendy Call, left, and Kaja Gjelde Bennett ’17, PLU’s latest recipients of Fulbright grants, both have chosen to use this opportunity to pursue Indigenous Studies work.

TACOMA, WASH. (April 4, 2019) — Pacific Lutheran University has a proud history of producing Fulbrights. The 2018-19 recipients are continuing that tradition by delving into indigenous studies research and education — a field that’s gaining ground at the university.

Kaja Gjelde-Bennett ‘17 and English faculty member Wendy Call were both awarded 2018 Fulbright grants to pursue research trips abroad. Gjelde-Bennett is working toward a master’s degree in Norway by exploring her heritage — the Sámi people’s language and history. Call will be translating indigenous women’s written work into English and teaching a course in Colombia.

With the recent introduction of its Native American and Indigenous Studies (NAIS) program, PLU is leaning into this area of study under the leadership of Troy Storfjell, the program’s director and an associate professor of Nordic studies. Additionally, a research project has been commissioned by the university to explore the history and heritage of the ground PLU was built upon — and learn more about the land’s historical caretakers, the Nisqually, Puyallup, Squaxin Island and Steilacoom peoples.

In a world where differences are increasingly being portrayed as stark and polarizing, it’s becoming more and more essential for us to come together and learn about one another. PLU’s Fulbright scholars are up for the challenge.

Over the past 44 years, 103 Lutes have been selected to participate in the program, which provides grants for individually designed study and research projects or for English Teaching Assistant Programs during one academic year in a participating country outside the U.S.

While in the field, Fulbright recipients share the experiences of their host country’s people, working, living and learning alongside them in a cultural exchange through interaction. This type of engagement allows for both hands-on education and also an appreciation for different worldviews, belief systems and philosophies in an environment of academic integrity and intellectual freedom.

Wendy Call earned her Fulbright Core Scholar opportunity in Colombia, translating the poetry of indigenous women writers in order to share and preserve them.

“What I’m most hoping to get out of it is really expanding my understanding of indigenous literature in Latin America and particularly indigenous poetry,” Call said. “Since I’ve for quite a number of years been translating Mexican poets who work in an indigenous language and then also work in Spanish.”

Call, an affiliated faculty member with the NAIS program and Environmental Studies, has published more than 70 poem translations in U.S. literary journals and has a full-length collection of poem translations forthcoming, from the work of Mexican-Zapotec poet Irma Pineda. Expanding to another Latin-American country was a natural progression for her.

“Colombia is just coming out of a long civil war and so it’s really interested in having foreign scholars come to the country as part of rebuilding in peacetime,” Call said.

Additionally, what Call describes as an “indigenous-literature boom” is taking place in Colombia. The country passed the “Native Language Law” in 2010, protecting the use of indigenous peoples’ languages in official settings and criminalizing language-based discrimination. This has helped open literary venues for indigenous authors that have long been barred.

“Working in a country that has formalized its honoring of indigenous languages is a pretty important part of this project,” Call said. 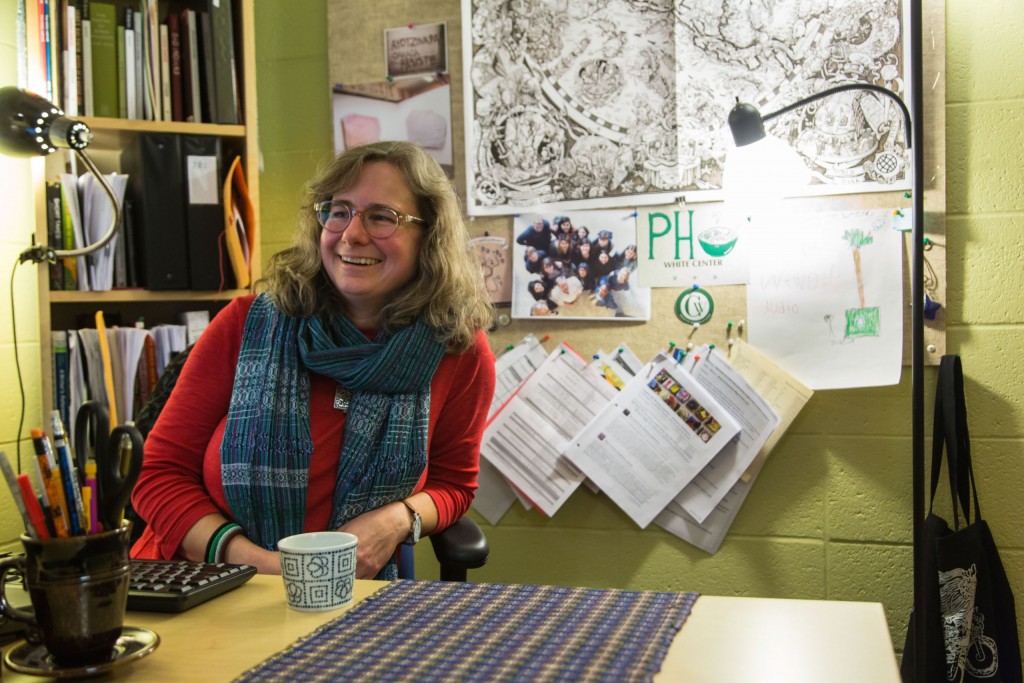 Wendy Call's Fulbright Core Scholar opportunity will take place in Colombia, translating the poetry of indigenous women writers in order to share and preserve them.

The translation process itself is a complicated dance that requires not two but rather three languages — Call sits down with an indigenous writer and uses Spanish as an intermediary for translating the writer’s bilingual work to English.

“One of the things that’s been really important to me — and this is not necessarily how all translators work, but it’s sort of important to my process — is that I want to be able to sit down with the author and ask that person really detailed questions about their work,” Call explains.

Those detailed questions are vital to ensuring that the true essence of a writer’s meaning isn’t lost in translation. As you might imagine, there’s always the possibility that an exact match for an indigenous word does not exist in Spanish, meaning that by the time it makes its way to the third language, English, there’s a risk that the meaning has become marred or stilted. It’s delicate, painstaking work, and Call is good at it.

While 60 percent of her Fulbright work will be earmarked as research — the translation work — the remaining 40 percent will be teaching at a Colombian university, Universidad Pontífica Javeriana in Bogotá. This coming July through November, Call will teach a semester-long course in Spanish on Native American  literature — sharing the stories of North America’s indigenous populations even as she’s learning those of Latin America.

“One of the biggest challenges for me designing this class … is I had to figure out which U.S. and Canadian native authors have been translated into Spanish,” Call said. “It was really interesting to see that some people that I think of as being very central to U.S.-based Native literature studies have not been translated at all.”

Call will return to Colombia twice more as part of her Fulbright’s flexible construction: a month-long stint in January 2020, followed by a six-week stay in June/July 2020. These divied-up teaching and research projects are becoming more commonplace as the Fulbright Commission accommodates the increasing demands placed upon faculty members that make a full academic year abroad impossible.

“I’m spending time and working in a country that is completely new to me — that’s been really exciting,” Call said. “I’m not really a world traveler. My work tends to be pretty focused in the Pacific Northwest and Mexico, so to go and experience a new place is … just a delight.”

Kaja Gjelde-Bennett ‘17, mentored through the grant application process by Storfjell and Call, chose to pursue her Fulbright opportunity after graduating from PLU. She enrolled at the prestigious Arctic University of Norway (UiT) in Tromsø to pursue a Master of Philosophy in Indigenous Studies in the hopes of realizing her professional dream — advancing efforts for indigenous language revitalization internationally as a scholar and indigenous rights advocate.

“Specifically, I want to focus on indigenous language rights and revitalization efforts in Norway and how they are or may be affected by transnational indigenous rights efforts,” Gjelde-Bennett said. “To accomplish this, I would need access to resources and opportunities only the Arctic University of Norway can provide.”

UiT is home to its own Centre for Sámi Studies, which means it can offer one of the world’s few comparative Indigenous Studies programs. The Sámi people are one of a handful of indigenous groups of Europe living in Sápmi — northern Scandinavia and Western Russia — and the Centre for Sámi Studies works specifically to promote the study and preservation of their language and culture.

“There is not a more ideal location and university in which to familiarize myself with the discipline of Indigenous Studies and utilize my multidisciplinary undergraduate degree whilst having the singular opportunity to continue learning Sámi language and culture in Sápmi,” Gjelde-Bennett said.

There’s a personal stake for Gjelde-Bennett in this line of study — she has Sámi heritage and wishes to reclaim her cultural roots. Gjelde-Bennett has completed research in four different countries over the past few years on indigenous rights efforts in Scandinavia.

“During my past research on indigenous rights in Sápmi, I was limited by the small number of scholarly sources in English and unable to access local media and academic publications in a language I could easily read,” she said. “Mastering both Norwegian and North Sámi will enhance my research by increasing the quality and quantity of resources I can access for my scholarly and eventually professional pursuits.” 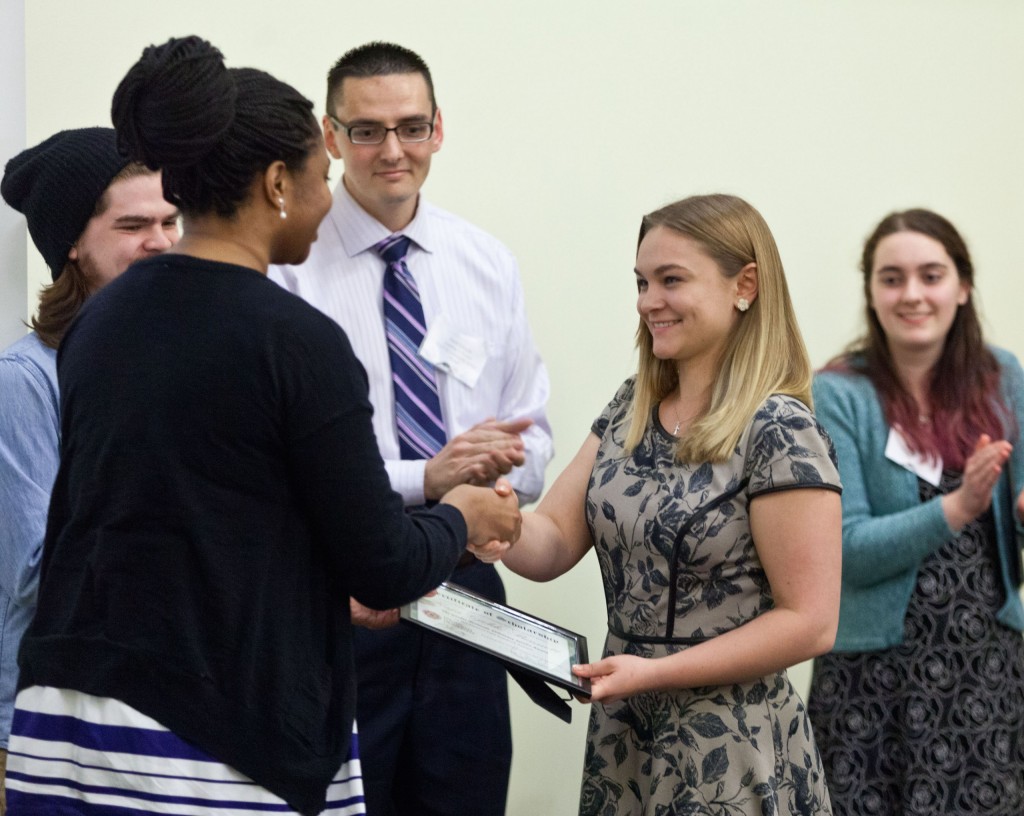 Kaja Gjelde-Bennett '17, shown here accepting the Gladys Mortvedt Voluntary Service Award as a sophomore, has Sámi heritage and is getting to explore those roots as she studies for her Master's in Indigenous Studies at the Arctic University of Norway.

Working as a full-time student, Gjelde-Bennett has the opportunity to collaborate and learn from the Centre’s indigenous experts — including those she’s cited in previous research work, like Else Grete Broderstad.

“After the Fulbright grant period, (I’ll) have in-depth knowledge of the history and strategies of language revitalization in Sámpi through local knowledge and resources,” Gjelde-Bennett said. “(Be able to) compare strategies in Sápmi with those of indigenous peoples internationally, and finally draw conclusions and devise strategies for the promotion and preservation of indigenous languages to potentially benefit indigenous peoples’ efforts globally to effectively exercise their rights.”

Her journey toward becoming an expert advocate for indigenous language rights and preservation won’t stop when she completes her Fulbright, however. Gjelde-Bennett intends to continue her schooling and become a university professor, passing on the knowledge and education she’s built up to aspiring students.

“Returning to the US, I will apply for PhD programs in either Indigenous studies or Sociolinguistics to perform a comparative analysis of the correlation between indigenous rights and language revitalization efforts in Sápmi and those in the United States and Canada,” Gjelde-Bennett said. “Though there are only a few Indigenous Studies programs in the US, it is a rapidly growing field of study.”