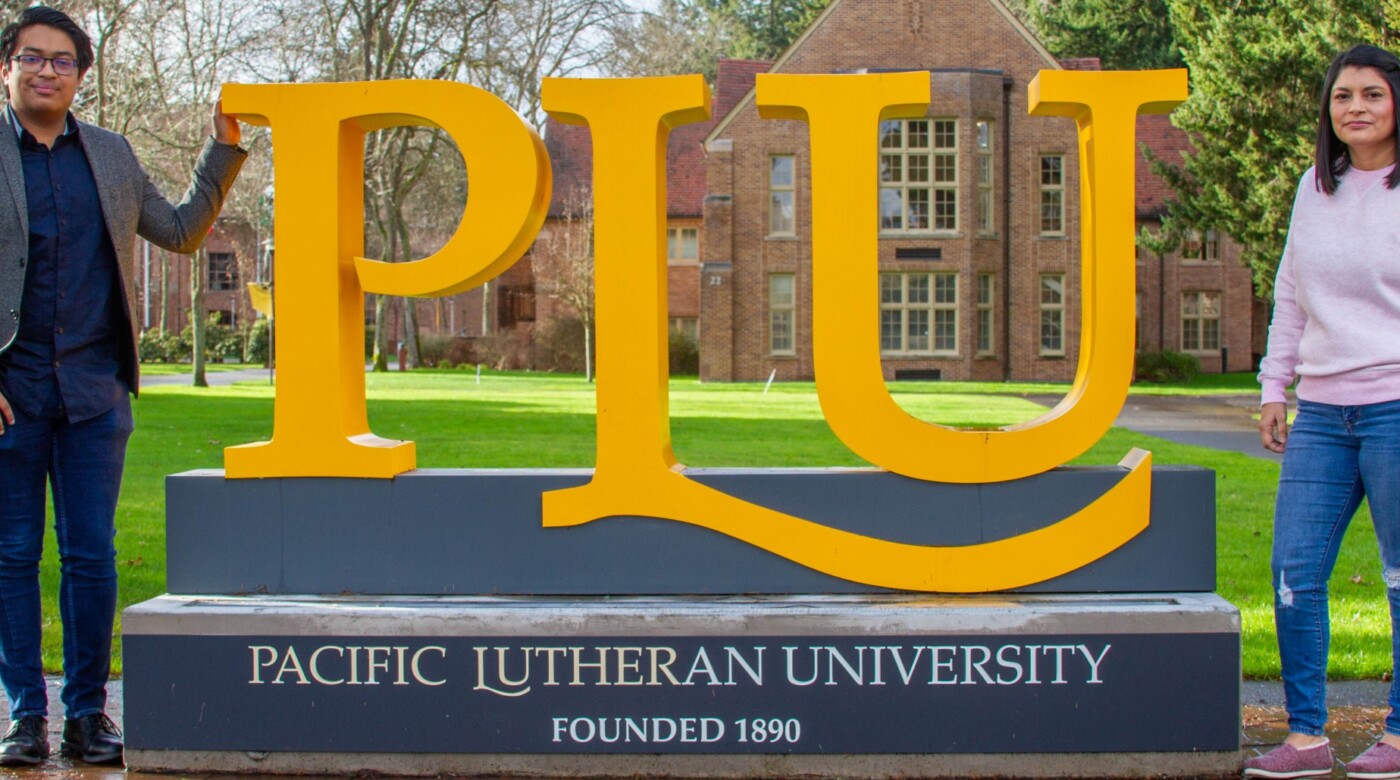 Mirna Morris, 39, recently started attending PLU full time to get a BSN in nursing, a final step toward her dream of becoming an intensive care unit nurse. Her son, Skyler Ramirez-Ortiz, 18, is also in his first year at PLU.

In fact, they may even walk the stage together in June 2022.

“I joke that my helicopter parents won’t even let me go to college without them,” Ramirez-Ortiz says. Joking aside, mutual admiration runs deep in this family, as does humor and love.

Family and Career: Returning to School

When Ramirez-Ortiz was just a toddler, Morris obtained an associate degree in science that allowed her to work as a medical assistant. “I had the intention of going back to school one day for a nursing degree, but then I started a family and lost track,” she says.

Drawn to the healthcare field after being hospitalized frequently as a child, Morris slowly completed the prerequisites necessary for a nursing program. Over three years, she took one class at a time while living with her husband — often stationed overseas while in the military — and raising three children (now aged 18, 9 and 6).

“One day, my son was 18,” Morris says. “I realized that I had to start focusing on my priorities, because returning to nursing school (had) been a dream for 20 years.”

Some classmates were born in 2001, when Morris’s son was born. Morris guesses that she’s one of the oldest in her cohort, but has only been encouraged by PLU students and faculty.

“I thought the younger generation would give me a hard time, but they’ve been the most welcoming and come up and ask questions,” she says. “They think it’s really cool that I’m pursuing my dream.”

Count her son among them.

“I don’t know if I’d be able to return to school after being away for so long,” Ramirez-Ortiz says. “I have a lot of respect for my mother, for being such a stand-up person and working so hard to support our family.”

As for Ramirez-Ortiz, this is his first year at Pacific Lutheran University, but he has sophomore standing at PLU after graduating high school with Running Start credits. He’s currently pursuing a double major in political science and economics. He hopes to attend law school after graduating, then work as a Foreign Service officer in the U.S. State Department — once he’s old enough to do so, at age 30.

Ramirez-Ortiz chose PLU because while a smaller school, it’s also globally connected, with opportunities to study abroad and meet people from around the world.

“PLU is where you can prepare to become part of the international community,” he says.

He plans to take advantage of study-away opportunities, particularly those that happen every year in January.

Some of the most challenging aspects of college life are, ironically, often the most rewarding. Morris says technology can have a learning curve — such as learning to convert a document into a PDF — but she loves newfound access to electronic databases and textbooks.

The other challenge (which may sound familiar to many college students) concerns time management. “I haven’t taken more than one class at a time for years,” she says. Juggling full-time school, children and work could tax anyone. She now uses a planner to plot her upcoming weeks, finding time to prepare for tests, relax and go out with her husband, Vincent.

Vincent was recently discharged from the army, and picks up the kids from school, puts them to bed and takes them to the park so Morris can study. He’ll even volunteer to be the first audience for her presentations. “I would not be able to do this if not for my husband,” she says.

Ramirez-Ortiz is enjoying the independence that comes with living in the on-campus dorms, but also feels reassured that his parents are only a 20-minute drive away in Tacoma. Other homesick students — whether from Alaska, Colorado or Wisconsin — make him value the proximity of home and running into his mom on campus.

Last semester, Morris had a class that ended just as his class began, so they’d run each other when buying coffee, or she’d see him hanging out with friends. Speaking with both, it’s obvious how much the two respect one another.

“He’s such a good kid, with great manners,” she says.

“She took a step away to raise me, and everything she does comes from a place of love and guidance,” he says. “Having my mother go to school at the same time is just a weirdly beautiful coincidence that works out for the best.”