Can learning to code be described as a social movement in American history?

PLU Professor Michael Halvorson thinks so. His reflections on the subject were recorded as part of PLU’s Homecoming and Family Week, which presented several lectures by the PLU faculty for the Lute community. The lecture presented arguments from Halvorson’s most recent book, Code Nation: Personal Computing and the Learn to Program Movement in America (2020). It can be viewed now on PLU’s YouTube Channel, at https://youtu.be/mqsrEYMwR6w. 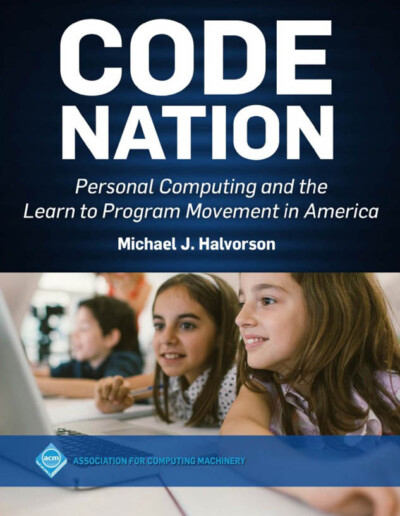 Code Nation is a five-year research project that grew out of Halvorson’s work with the Innovation Studies program and his duties as Benson Family Chair of Business and Economic History at PLU.

The book explores the business and technical history of computer programming in America, including early research in government labs and universities; popular movements that emphasized coding; hobbyists and early personal computing; and the contributions of software companies such as Microsoft Corporation, where Halvorson worked from 1985 to 1993.

Code Nation explains how our modern world of computing came to be, and the role of computer programmers (or software makers) in the process.

Halvorson’s unique focus is on the social dimensions of coding in America: “Computer programming has taken on many of the aspects of popular movements, including charismatic leaders, shared ideologies, educational activism, and millions of users who have had their own experiences of making and using software. It is a powerful and inspiring story.”

To learn more about the Code Nation project, or purchase a discounted copy, visit www.thiscodenation.com.