Visiting campus and can’t make it to the gallery? There’s a plethora of art around PLU for your enjoyment. Campus art weaves the story of PLU’s history; some pieces mark historical events while others like the Rose Window illustrate our Lutheran Heritage. All art listed below can be viewed outdoors.

See it: The Scandinavian Prow is located on east side of campus in front of the University Center. The prow can be viewed from Park Ave.

The sculpture, a reminder of the university’s Nordic roots, is 25 feet tall and weighs 2,200 pounds. In the spring of 1992, the Viking ship prow made its way from Anacortes, Washington, to its present location in front of the Scandinavian Cultural Center in the University Center. The planking is Western Red Cedar, and the fasteners are copper rivets and roves from Norway. The artist, Paul Schweiss, is a boat builder with Nordic connections. 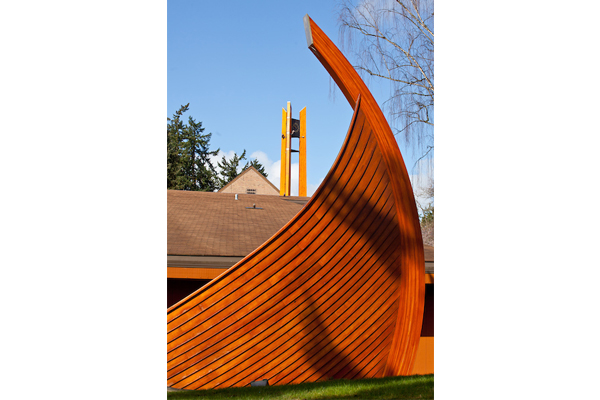 See it: The Anderson Clock Tower is located outside the University Center.

The Anderson Clock Tower has displayed the time to students outside the University Center since 1970. Herman and Vivian Anderson funded the original 60-foot tower and the later restoration. The new clock tower is made of Alaskan yellow cedar and has new cedar bench work around a reconditioned concrete base and lighting to illuminate the clock. 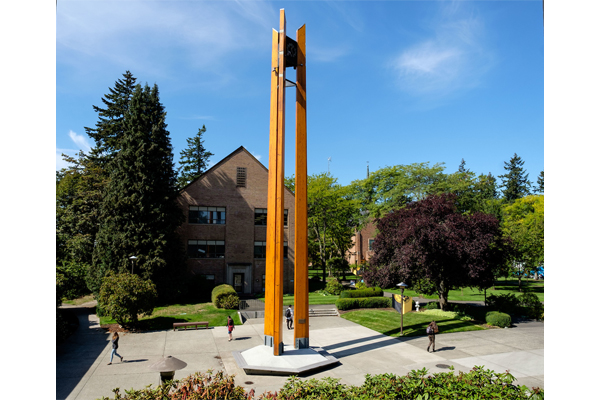 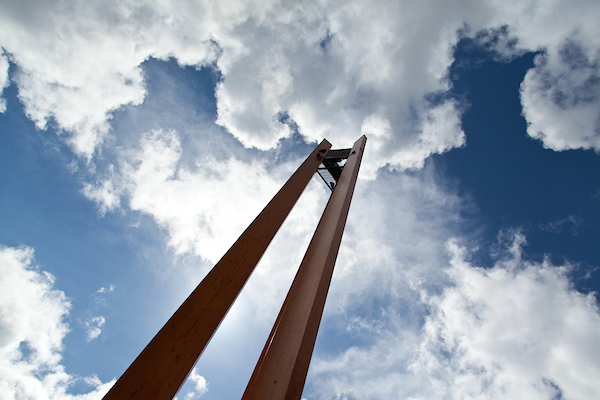 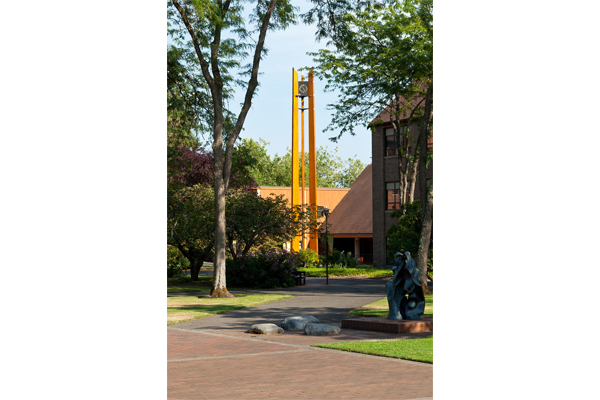 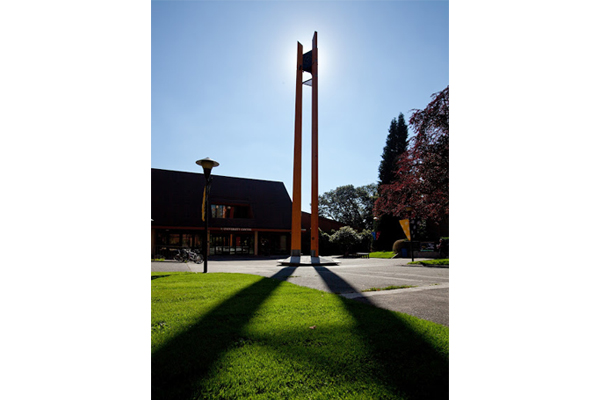 See it: The Centennial Bell is located in the middle of campus on Red Square, across from the Ness Family Chapel in the Karen Hille Phillips Center for the Performing Arts.

The steel and brick Centennial Bell was a 100th-birthday present to the university in 1990 from then-President and Mrs. William O. Rieke. The bell structure is 12 feet high by 15 feet wide.

See it: Rune Stones is located in Red Square

The Rune Stones is a sculpture consisting of five weather steel shapes placed around a single tree and two benches. Four of the metal runes are movable and made of varied Corten steel. The “stones” have the following bead weld inscriptions:

The Rune Stones was given by the 150th Sesquicentennial Commission

See it: The Rose Window sits at the center of campus in Eastvold Chapel. It can be seen from Red Square.

Dedicated in 1952, the eight-foot diameter stain glass rose window was designed on a theme suggested by PLC religion professor Jesse Pflueger, which depicts the “Agnus Dei, Christ the Victorious Lamb of God.” The lamb beholds heaven and is surrounded by eight semi-circles, which radiate from the center and four (of eight) spaces beyond describe “four living creatures” a lion, an ox, an eagle and a human face; the other four are the prophet’s symbols, Jeremiah’s scroll, Isaiah’s coal, Ezekiel’s turret and Daniel’s lion. Along the outermost ring are symbols for the Trinitarian Dogma, the Dove (Holy Spirit), the open bible and Luther’s crest of Arms. The Rose Window is the inspiration for the familiar PLU logo and is visible from Red Square and the chapel.

Below the image gallery is a moving description of the various elements contained in this window written by PLU Professor Emeritus Stewart D. Govig.

“Don’t give up now, you’re almost there!” used to read the sign at the third staircase landing of Eastvold. Climbers who make it to the top know the colored glow of the Rose Window offers a visual reward as well as a glimpse of the inspiration for the familiar PLU logo.

Dedicated in 1952, the small worship space high on Eastvold Chapel’s east wall marks a stark contrast to the plain exterior dimensions of its host. And its large, eight-foot, circular stained glass window can not only hush our attention, it can also educate the patient viewer in Christian theology. Religion professor Jesse Pflueger suggested a theme to artists of San Francisco’s Cummings Studio in 1951: the Agnus Dei, Christ the victorious Lamb of God.

The seer of Revelation beholds heaven (Rev. 4:1), and, within its ceaseless worship, the throne of God (7:15). Nearby stands a Lamb, looking as if it had been slaughtered, but now alive forevermore and worthy to open the seals of God’s final judgment Scroll. Consequently, the One who shares honor and glory forever (5:6-14) becomes the artistic focal point.

Eight semicircles radiating forth from it remind observers of the Lamb’s beatitudes: “Blessed are the poor in spirit for theirs is the kingdom of heaven…” (Matt. 5:3-11). Four spaces beyond describe Revelation’s “four living creatures” (4:6-1 1) namely, a lion, an ox, a creature with a “face like a human face,” and one like “a flying eagle.”n, Ox, Eagle, and a Face. In Christian tradition, each of them represents a New Testament Gospel. Four others recall Biblical prophets: Jeremiah’s scroll, Isaiah’s burning coal, Ezekiel’s gateway turret, plus Daniel’s lion.

How are we introduced to the Lamb in Scripture? Through prophet and evangelist. Stationed at the end of the Bible, Revelation chisels a capstone vision of the Risen Christ. Crowns of earthly kings, (note semicircles) are cast before the eternal Ruler (4:11) now alive beyond reach from the death of the Cross (the nimbus framing the Lamb’s Head) and qualified to herald a Resurrection pennant of gold (preciousness) and white (purity and victory).

The horizontal plane of our window reveals the Church’s ecumenical Trinitarian dogma. To the left, the Hebrew letter “yod” set within the equilateral triangle hearkens back to Moses, the burning bush (Exodus 3) and the sacred name “Yahweh.”

Moving right in line glows God’s Son, the Agnus Dei; look next for the Dove, head framed in red (fires of Pentecost, Acts 2), who betokens the Holy Spirit. The vertical plane, beginning at the top, discloses an interpretation of our institution’s Christian denominational tradition. Luther insisted, “The Word Alone,” meaning for him an open Bible for all. Yet how, some ask, can just anyone read and comprehend it? By keeping Christ, the Risen Lamb, at the center, he replies.

The panel at the bottom displays Luther’s coat of arms, itself a set of symbols. From 16th-century Europe, Lutherans in confession and praise will intersect — but not break with — the universal Church’s horizontal line of identity. We join fellow believers everywhere to address “Our Father, who art in heaven…” (Matt. 6:9).

Further out, vivid red frames embrace additional panels featuring five and six-pointed stars set against cosmic blue. These suggest the major parts of the Christian Bible, Old and New Testaments. Holly leaves in green are included here; they balance out the prophetic and evangelist schemework, and announce a tribute to the climate of the Puget Sound and to Washington, the Evergreen State.

For years, I have followed hundreds of Lutes in my classes up the chapel stairs to revel with them in stained glass iconography. I’m confident they would support me in inviting you to make the climb for yourself. Join our alumni band of climbers. The morning light is best. Let a swirl of image and the fire of color refresh your soul and make your day.

See it: Located on the south side of Red Square

This metal sculpture is named in honor of Agnes Hougen Stuen (1883-1982), a teacher and the wife of a professor, Ole Stuen. Esther Hougen Davis (1896-1979) was a bookkeeper at PLU during the 1930’s and 1940’s, the sculpture was commissioned and paid for by George Davis, a PLU regent and son of Esther Davis. A base plaque reads “A lifetime of caring, loyalty and service to the community and university. We remember them with love.”

See it: Located in Red Square in front of the Karen Hille Phillips Center for the Performing Arts

This bronze bust of Martin Luther commemorates the 500th anniversary of his birth on April 30, 1484, and stands outside the Karen Hille Phillips Center for the Performing Arts in Red Square. It is one and a half scale and was commissioned by the 500th Anniversary Committee.

See it: Located on northeast campus, Glass Roses is displayed in the entrance of Mary Baker Russell Music Center and is viewable from the Amphitheater.

George Lagerquist commissioned glass artist Dale Chihuly to create a work that would celebrate Eastvold Chapel’s Rose Window. Chihuly produced four large glass roses, each made up of nine pieces, or petals. Each rose color is a different theological symbol: green for God the Creator, blue for the Trinity, white for the Luther rose and red for Jesus Christ. The roses hang on the east courtyard wall of the Mary Baker Russell Music Center.

The James Holloway Memorial is a transparent etched glass slab with a memorial “Excellence” plaque mounted on a brick base. The memorial design characterizes the wide-ranging nature of James Holloway’s interests.

Dr. James Holloway (1960-2001) was the University Organist and Professor of Organ and Church Music at Pacific Lutheran University where he served as a studio teacher, musicologist and choral conductor. He created the Mentorship Program for Vocations in Church Music at PLU and taught in the Honors and Freshman Experience programs. A mentally unstable assailant murdered Dr. Holloway on campus in 2001.

The artist, Kathryn Wold Sparks, was the curator of the University Gallery and a close friend of James Holloway. 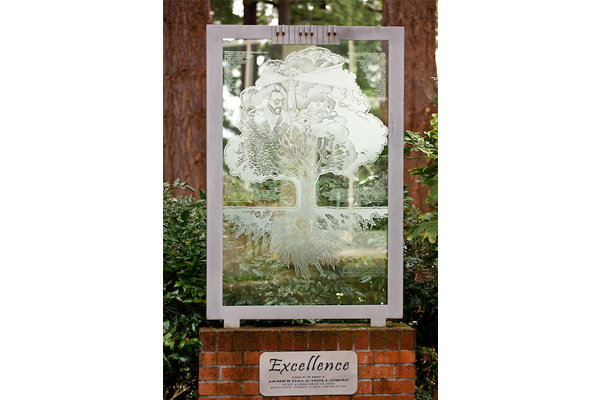 See it: Located on the lawn of the southeast corner of the School of Arts and Communication.

The metal sculpture was a gift to Pacific Lutheran University from Dr. Richard and Marcia Moe. It is approximately ten feet tall and has a donor’s plaque. This piece continues the theme of bell and basic geometric shapes that the artist was examining in this era.

School of the Arts

See it: Located on the western entry of upper campus.

“The School of the Arts” sign is a combination of materials including neon letters that spell out “arts”. This is sculpture was commissioned by the School of Arts now the College of Professional Studies and is approximately eight feet long and eight feet high.

See it: Located on lower campus below the music center.

The three plate Corten Steel tree sculpture was donated by R. Gene and Esther Grant and dedicated to honor the visit of their Majesties Harald V, King of Norway, and Sonja, Queen of Norway on October 26, 1995. The plates are attached to a cast in place concrete armature. The overall dimensions are approximately eight feet wide by one foot thick by 12 feet high. The monument is located on the lower campus below the Mary Baker Russell Music Center. David Keyes assisted with the installation and fabrication.

“Peace is deep in our roots, hop is high up in branches’ reach. Oh, we are not unmoved, unbuffeted unbowed – the wind and storm may leave us bend and scarred at times; we draw up strength from the richglad soil and raise ourselves up most when we bear up those trees nearby who need this strength, which is rained down as compassion and is poured out as grace on us in sunlight’s healing waves. So shall we stand, joyful, stretching forever upward to grow closer to the light. In this we hope; in this, we find our peace.”