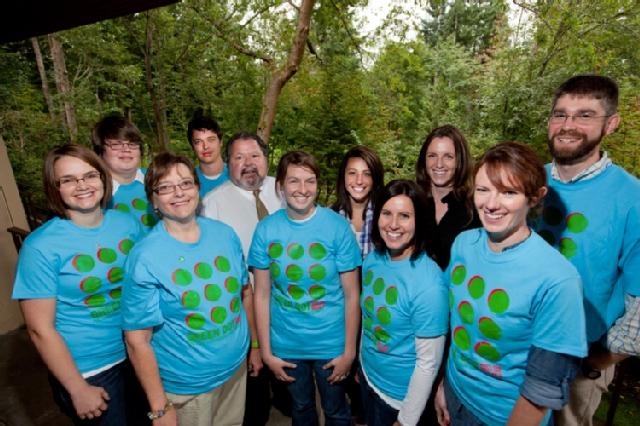 The Women’s Center is joining in the state-wide effort to raise awareness about how to get involved with creating safer communities through the Green Dot campaign. (Photo by John Froschauer)

Pacific Lutheran University’s Women’s Center has been the cornerstone of advocating against domestic and intimate partner violence in the community.

This is the third time the center has applied for and received the funding, formally called “The Grant to Reduce Sexual Assault, Domestic Violence, Dating Violence and Stalking on Campus,” which is awarded specifically to colleges and universities that address and prevent intimate partner violence.

The newly-awarded funding will cover the next three years of operation, and helps support the Voices Against Violence program. This program educates communities about intimate partner violence, and provides support services for victims of violence.

Hughes said two vital staff positions are funded through the grant, as well. PLU is able to employ Jennifer Warwick, the victim’s advocate, and Jonathan Grove, the Men Against Violence project coordinator. Both staff members empower men and women to speak out against domestic violence, and serve as a central support system for victims.

“If we didn’t have the grant we wouldn’t likely have those positions,” Hughes said.

PLU is the only college in the state of Washington to receive this funding, Hughes said. It is extremely competitive, and Hughes said that it is uncommon that a single program is awarded the grant multiple times. Out of 62 colleges who have received the same grant funding in recent years, only 11 programs have received the grant three or more times, according to statistics from the Department of Justice.

Hughes credits the continuation of support to the amazing work the Women’s Center continues to do in the community.

“That sets us apart,” she said. “It says we have a really strong program.”

The grant is funded through the Department of Justice. The Women’s Center boasts a total of approximately $750,000 overall funding from this specific grant program, including the funding received in 2005 and 2007. Thanks to this funding, the Women’s Center has been able to provide prevention education and training for Campus Safety and other student leaders, in addition to further development of programs like Sexual Assault Peer Education Team, or SAPET, and other support services.

“We hope to provide more opportunities for students to gain experience and develop skills,” she said.

These opportunities, Hughes said, will hopefully include new volunteer, professional and internship opportunities for students interested in getting involved.

Green Dot, which is part of a state-wide effort to raise awareness on how to get involved and create a safer community, is a new focus that Hughes said will gain a lot of support from this new funding.

“I want people to feel really proud of PLU for being a place that supports resources that ultimately make our campus safer,” Hughes said. “Most universities don’t have what we have. It’s a unique asset.”

Hughes said she loves how far the university has come in promoting awareness about these issues. She said these programs weren’t readily available when she was a student, and the progress is promising.