Education and Journalism: Hard work and worth the effort 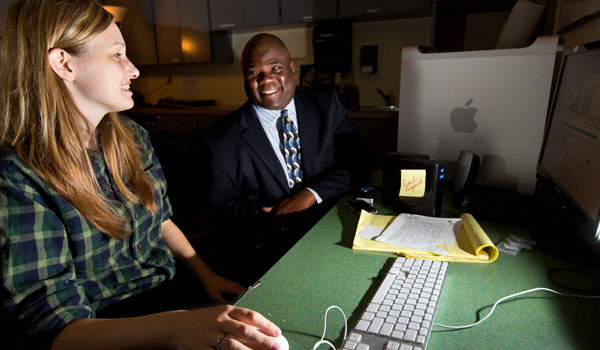 Education and Journalism:
Hard work and worth the effort

Robert Marshall Wells was looking out the window of his corner office at AT&T, where he was working as a public relations specialist, looking beyond the rolling hills and D.C.-area cityscape, not really seeing anything. Wells was pondering his future.

He had already racked up an impressive set of credentials, with a bachelor’s of general studies from American University in Washington, D.C., and was then completing a master’s of communication, also from American. For nearly 10 years, he’d worked in banking, marketing, and finally public relations.

“I didn’t like it, I certainly didn’t hate it,” Wells, associate professor of communication, mused recently during a break from sabbatical work on a certificate in documentary studies at Duke University.

“But I came home at the end of each day and asked, ‘What have I really accomplished today?’” That question began to gnaw at Wells.

His entire career track changed in 1989, when a journalism professor in his master’s program pointed out a posting for a job fair at The News Tribune in Tacoma – wherever that was. On a whim, Wells booked a flight out to the Northwest and showed up at the job fair with hope, a resume, and no journalism experience whatsoever.

Wells received polite passes from most of the editors, until one, TNT City Editor Gary Jasinek, sat down and gave Wells the cold hard facts of journalism: He was probably going to face long hours and make half of what he was making at AT&T. Maybe less.

But Wells was resolute. “I remember wanting to feel involved in something, something larger than myself.”

The interview concluded, and Wells was walking out of the door of the TNT and into the fall sunshine, figuring “oh well, back to PR” when he heard someone hail him. Jasinek told Wells that an internship would be available that next summer. Pay was lousy, but would he be interested? Wells snapped at the chance to follow his passion, and a journalist was born.

Since then, Wells worked for the TNT, Congressional Quarterly, and the Seattle Times. He arrived at PLU in the fall of 2003, as a fill-in for now-retired communications professor Cliff Rowe. Wells found himself delaying, and delaying, his return to the Times.

Finally, he admitted to himself he just didn’t want to leave PLU.

“There’s something about this place. It gets into your blood,” Wells mused, now going on 10 years at PLU. In that time, Wells has fed his passion by shaping future journalists, creating the award-winning MediaLab, and contributing to efforts to create a media studies center at PLU.

The MediaLab idea was born in 2004. The best and brightest media students in journalism, video, photography, public relations, and other disciplines have since scored over a dozen awards as well as one Emmy. MediaLab students have traveled into areas ravaged by tornados and oil spills, gone up the Alaskan Highway in search of unsung war heroes, and looked into weighty topics such as immigration, the changing American family and attitudes towards Islam in the United States.

“I view teaching much like I view journalism,” Wells said. “It’s still an education process. And here, you give students a good start, and help them find their way. I think of the professors who encouraged me, and gave me a kick in the butt when I needed it.”

Wells would like to return the favor. And he has found it here – a place that is small enough that he knows each and every student, and large enough “so we can do some pretty remarkable things.”

His job at PLU is more to encourage students, rather than tell them what to do. And his advice for recent graduates, not only facing a tough job market, but an industry in turmoil? Take chances, albeit calculated ones. (He’s not sure about flying across the country based on a classified ad.) Be flexible, and learn how to think. Finally, learn to write well and tell a good story.

“That will lead to everything else.”