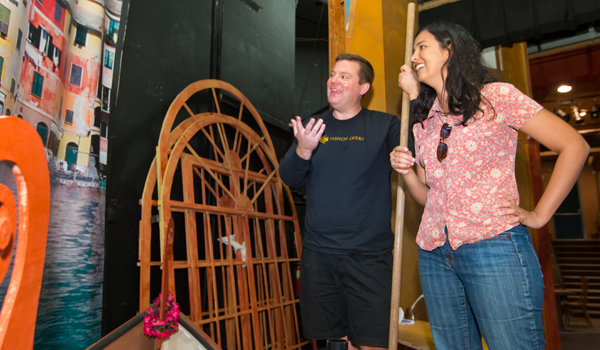 Associate Professor of Music Jim Brown and Sorayah Surkatty ’10 at the Vashon Opera.

If there is one discipline where finding a job is heavily weighted on “who you know,” it’s the arts, even more so with opera.

As Sorayah Surkatty reflects on her new career in the realm of big voices and classical music, she is well aware of that fact. The vocal performance graduate credits her connections with her voice coach and PLU music lecturer Holly Boaz, and Jim Brown, associate professor of music, with securing her connections with the Vashon Opera on Vashon Island, Wash.

Surkatty recalls Boaz initially recommending her for a part in “Hansel and Gretel” with the opera company. She played Gretel. Then Brown hired her this fall to work on a stage production of “Cosi fan tutte” by Mozart.

She clearly relishes the chance to both sing and help with the productions of the relatively new company.

“People really appreciate doing business with people they like, and that’s all the more true for the arts world,” Surkatty said. “In opera, a lot of the castings begin with recommendations. That’s eventually how you land the big gigs.”

That, and a passion for your craft. Surkatty was born in the United States and then traveled back with her family to Indonesia when she was only a few weeks old. Her family returned to the Yakima, Wash., area when she was 14 – in the middle of the winter. Not only was the weather a shock to the high school freshman, but the culture was a shock as well. She was more acclimated to a laid-back atmosphere and a tropical climate.

“I was really lost when I came here. But then I found my friends, my home in the choir,” she said.

As for opera, Surkatty was hooked when a traveling opera production came to her high school “and just blew me away. Before that, I thought it was all fat lady with the horns, but there’s such a magnificent beauty to an operatic voice.”

And when it came time to choose a college?

“For me, there was no other choice,” she laughed. “It was PLU or bust.” Part of her focus on PLU stemmed from the reputation of its music department, as well as the connections and reputations of the professors. It’s those connections with the local arts scene that has served many graduates well.

“In this job market, or really any job market, it never hurts,” Brown said on the topic of recommendations and “who you know.” But he’d like to make one clarification.

“I don’t think really any of us ‘get these people jobs,’” he said. “We give them opportunities. It’s the remarkable talent and intellect of our graduates that get them jobs.”

To return to the main page of PLU’s Office of Admission, click here.