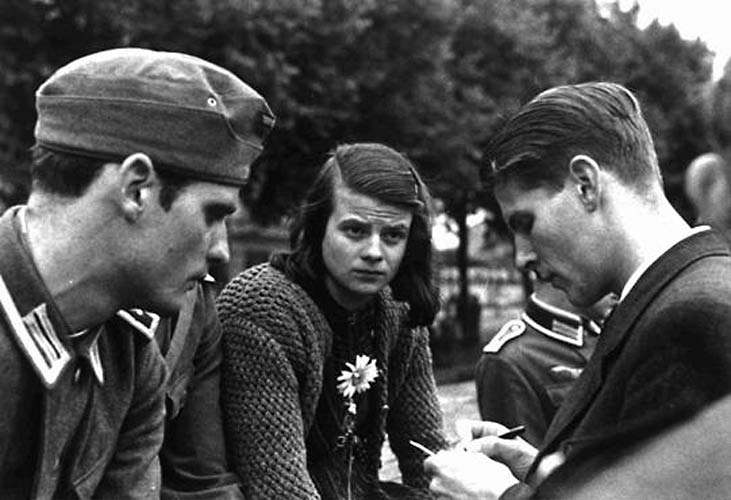 The White Rose member Sophie Scholl, center, was arrested by the Gestapo on Feb. 18, 1943, and, along with two other members, was executed by guillotine on Feb. 22. (Photo courtesy of The White Rose exhibit.)

The photo exhibition, created and sponsored by the Munich-based White Rose Foundation (Weiße Rose Stiftung), chronicles the brief yet intense history of the White Rose resistance movement against the Nazi regime. The exhibit is currently on tour across the United States and comes to PLU during the university’s renowned Powell-Heller Conference for Holocaust Education, March 12-14.

According to exhibit organizers, The White Rose was a small, nonviolent resistance group formed in 1942 by University of Munich students who spearheaded a nine-month anonymous underground campaign calling for active opposition to Adolf Hitler’s regime. Group members created mimeographed leaflets, leaving them in public spaces and mailing copies to members of the intelligentsia whom they felt might respond to their message of peaceful resistance. At night, the students painted slogans against the Nazi regime in a graffiti campaign around the city. Eventually the movement expanded to other German cities, including Hamburg, Berlin and Vienna.

On Feb. 18, 1943, White Rose members Hans and Sophie Scholl were arrested by the Gestapo after distributing leaflets in the University of Munich atrium. Along with another member, Christoph Probst, a married father of three children, the Scholls were executed by guillotine on Feb. 22. Many other White Rose members stood trial and faced execution or imprisonment in the months to follow.

The last White Rose leaflet was smuggled out of Germany and ultimately airdropped in large quantities over the country by Allied Forces.

As part of its U.S. tour, the exhibit, which chronicles and remembers the courage and resolve of the White Rose members, has made stops in Ohio, Indiana, Colorado, New York and Iowa and, in the Pacific Northwest, at Washington State University and the University of Washington.

At PLU, the free exhibit is open to the public and will be displayed on the first, second and third-floor lobbies of Mortvedt Library during regular library hours.