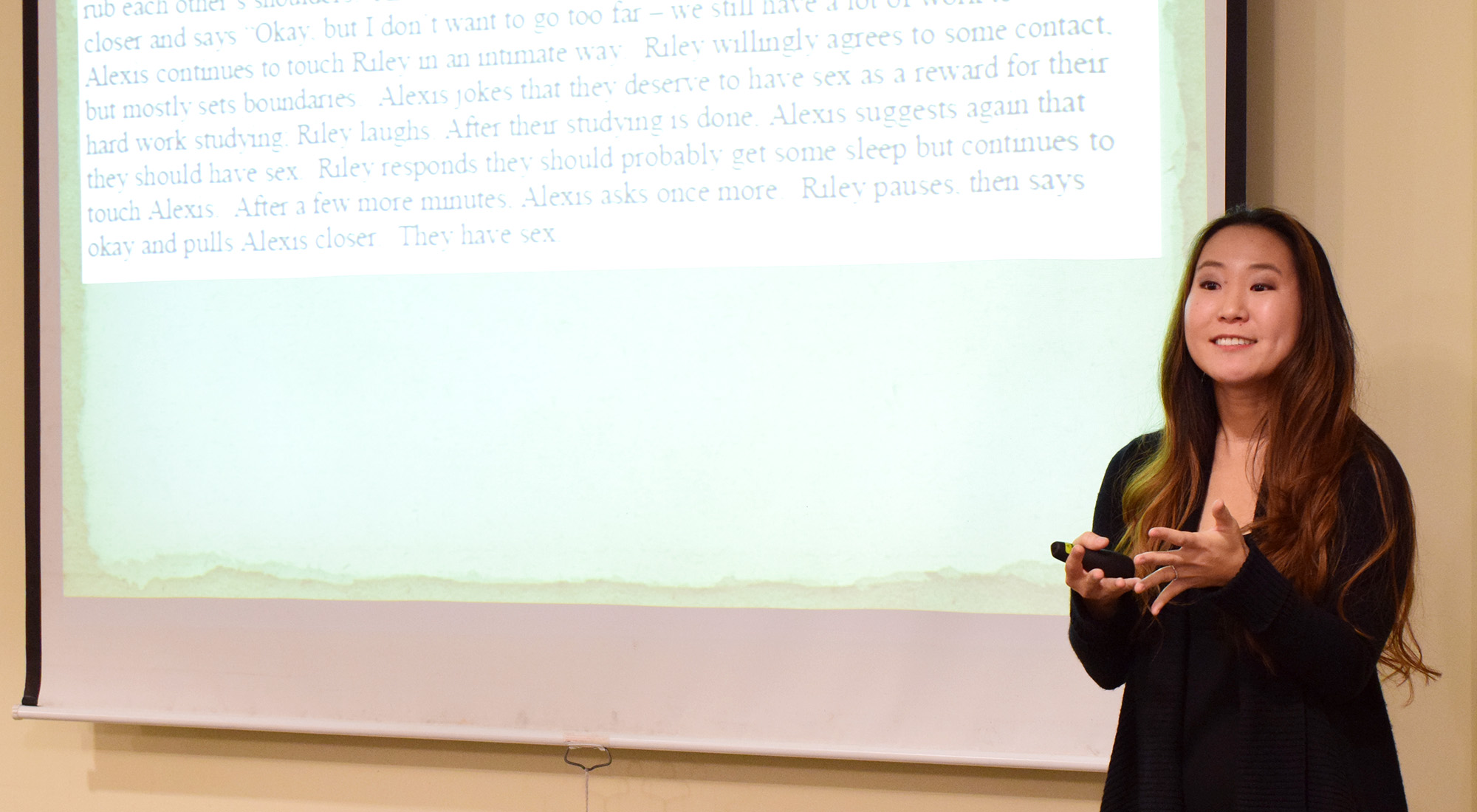 Commonly referred to as “yes means yes,” the new policy asserts that all individuals involved in a sexual act must verbally consent to the act for it to be classified as legally permissible. In all states besides California, the standard is “no means no,” which dictates that an individual not verbally objecting prior to a sexual act is justification to excuse that act from being classified as sexual assault.

Learn more about PLU’s Sex + campaign and its sponsors: The Diversity Center, Women’s Center, Lute Fit and the Health Center.

Sill began the lecture by explaining that as a concept and even as a policy, “no means no” is not new. The recent development, Sill told the audience, is government beginning to take notice and action.

Sill explained that under affirmative consent law, the definition of “consent” (which she summarized as “expressed willingness to engage in sexual activity”) does not change, but rather the lens through which potential instances of sexual assault are evaluated is redesigned. “‘Yes means yes’ is not a new consent standard. It is significant because this is the first time that a governmental agency has mandated that universities use ‘yes means yes,’ or what’s called ‘affirmative consent.’”
-PLU Assistant Professor of Political Science Kaitlyn Sill

What is changing is the presumption of whether or not consent is given… What these laws do is change our understanding of how to approach the question of when consent is given in ambiguous situations… Specifically the type of situations this is dealing with is ones in which two people are already in some kind of intimate relationship or situation and it escalates.

Sill explained that the new law restructures the legal process of proving or disproving sexual assault and that “yes means yes” legislates that, for the first time, it becomes the responsibility of the accused to prove that consent was given by the accuser (and potential victim).

Any time you walk into a legal case there is somebody who has to prove something or demonstrate something. There is an assumption that somebody is right and somebody is wrong and somebody has to make the case… Under “no means no,” consent is assumed. The burden of saying there was not consent is on the person who is making the (sexual assault) accusation.

The passing of “yes means yes” in California is a groundbreaking step, but Sill reminded the audience that “no means no” was perhaps even more revolutionary when it was originally introduced.

The idea before (no means no) was if a woman was in an intimate situation, then she had consented to everything… No means no was huge because it gave people the power to stop an activity. At the peak of victim blame, this was huge.

Sill then led the audience in contemplating multiple hypothetical scenarios that highlighted the nuances of establishing affirmative consent and how nonviolent sexual encounters within a committed relationship may constitute sexual assault under both “yes means yes” and “no means no.”

Sill also explored the role of gender-based stereotyping in the investigation of sexual assault. Women, she said, often feel forced to abide by societal expectations of femininity when pursuing or considering a sexual act.

Sill explained that in a healthy sexual relationship, neither party is more or less the initiator.

The program concluded with questions from the audience that addressed the process used by PLU to investigate reports of sexual assault, why a student would report a crime as serious as sexual assault to his or her university instead of just to the state, and why universities have been reluctant to report cases of sexual assault on their campuses.