Image: Lutes make their way to a classroom at the Washington Corrections Center for Women in Gig Harbor on April 21, 2017. (Photo by John Froschauer/PLU)

TACOMA, WASH. (Oct. 13, 2017)- “We made a magazine!” Taryn Collis exclaimed to a group of Pacific Lutheran University students and several inmates at the Washington Corrections Center for Women.

“It’s impressive,” continued Collis, an actor and educator with Seattle-based Freehold Theatre Lab Studio. “Everybody shared a little about who they are.”

Half of the group came through security to gather in the small classroom and recite their writing. The other half was already there. Despite that stark difference, the group shared a lot in common. All of them allowed themselves to be vulnerable and share pieces of their identity in the emotional reading of their prose.

The experience was the culmination of a series of creative expression workshops co-taught by Collis and PLU Professor Jennifer Smith. The group of 10 students in the International Honors program visited WCCW four times over several weeks. The class, “IHON 253: Gender, Sexuality and Culture,” will be offered again in the spring.

“This class provides opportunities for students to explore identity in complex ways that are connected to their everyday lives,” Smith said. “We theorize out of experience and apply theory to experience so as to ask big questions about power, supremacy, agency and collective liberation.” 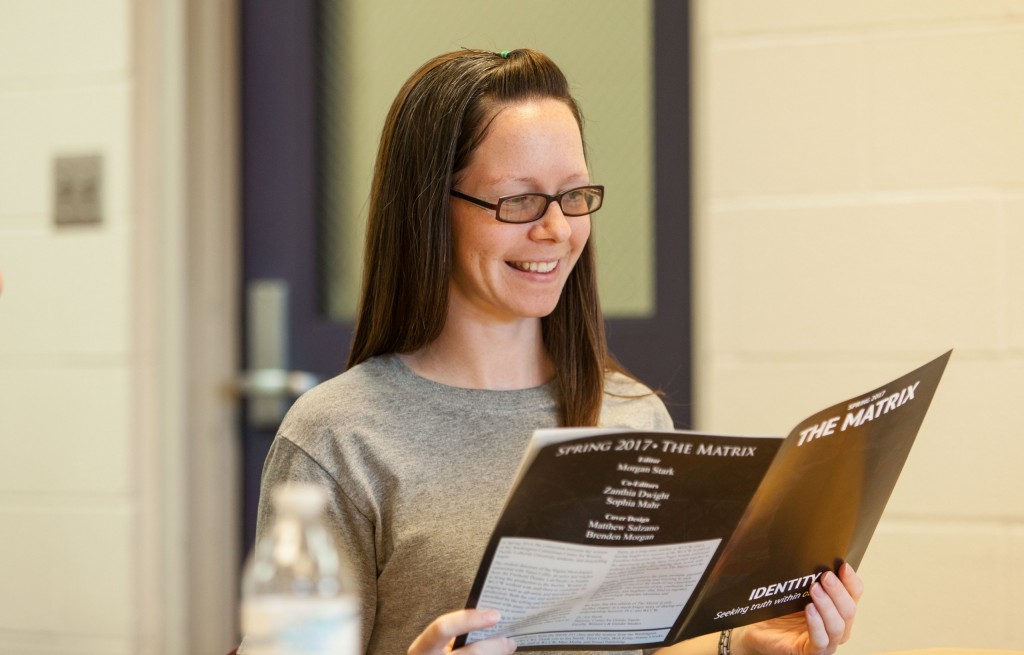 Samantha, an inmate at Washington Corrections Center for Women, reads a copy of The Matrix during a meeting with PLU students on Friday, April 21, 2017. (Photo by John Froschauer)

Smith has taught at WCCW for two years as part of the Freedom Education Project of Puget Sound, which offers high-level college courses for inmates. She teaches two courses at the jail: an introduction to gender studies as well as a diversity and literature class.

“They rise to the challenge,” Smith said of the inmates she teaches. “They are just amazing students. They support each other and cheer each other on.”

In spring 2014, Smith’s work at PLU — which includes serving as director of the Center for Gender Equity — and her work at WCCW collided. The student directors for “The Vagina Monologues” connected with Collis to bring the production to the prison. The audience was “electrified,” as Smith says, leading to a continued partnership in 2016, when WCCW inmates were invited to share their own stories. Students worked closely with the inmates to produce original monologues as part of the performance.

While meaningful, the inmates wanted to deepen their ties with PLU.

“They only got to know them for the afternoon,” Collis said of the initial partnership. “They wanted more time with the students.”

That, accompanied with an absence of the monologues in 2017, resulted in a new arm of the partnership using a publication centered on identity.

Morgan Stark ’17, then-editor of the student-run social justice magazine The Matrix, and a handful of fellow Lutes enrolled in Smith’s class joined eight WCCW inmates for several writing workshops. They collaborated to publish their work in the spring 2017 issue of The Matrix.

For many, it was their first time being published.

“Everyone’s material was very good,” Stark said. “You should be very proud.”

Titles such as “The Mask You Never See” and “The Truth of What I am” were accompanied by first names alone; Stark said that approach allowed the writing — not the underlying identities of the authors — to shine. “The work really stands on its own,” she said.

On that final day within the walls of the prison, as the the group examined the magazines hot off the press, each participant read their writing aloud. As people cycled through their turns — and stood in to read for those not present — everyone snapped in unison. Inmates and students alike laughed together, grappled with emotions together and exchanged questions about life inside and outside the prison gates.

“I didn’t know what I was getting into,” Heather, a WCCW inmate, said of the workshops. “But I was so glad I did. I wish I could put it into words.”

Kandyce, a fellow inmate, echoed that sentiment: “Even though we come from different walks of life, we have a lot of the same struggles.”

PLU students spent much of the time listening.

Taylor Bozich ’17, who earned degrees in global studies and biology, said she initially experienced anxiety about coming to WCCW. She acknowledged how brave it was for the inmates to be so vulnerable with a group of strangers. “That’s a hard thing to do.”

Smith and Collis plan to continue the partnership between PLU and WCCW. It’s unusual for correctional facilities to allow outsiders to spend so much time with inmates, Collis stressed.

“It’s a big deal the prison let us do this,” she said.

Students who wish to participate in the next class can register in November. It will be similar in scope and intent to last year’s course, Smith noted, and there will be another experiential learning opportunity for students whose schedules don’t accommodate trips to WCCW. A detailed schedule is still in the works, she said.

“It helps you think about what education looks like in a different context,” Smith said, “what it means to be a student in a variety of situations.”

The educational exchange also shows students on both sides that they aren’t entirely dissimilar, she added. “It helped to break down a lot of stereotypes about women who are incarcerated,” Smith said. “And the inmates were surprised to see kindness from private college students.”

Smith said they are trying to grow the program from within the walls of the prison; inmates are getting the word out to increase the number of participants.

Samantha, a 27-year-old inmate at WCCW who has been incarcerated for eight years, is likely to sing the program’s praises. She’s happy she took the risk of trusting strangers.

“To know our work is being published, that’s awesome,” she said. “Sometimes, we aren’t always heard.”