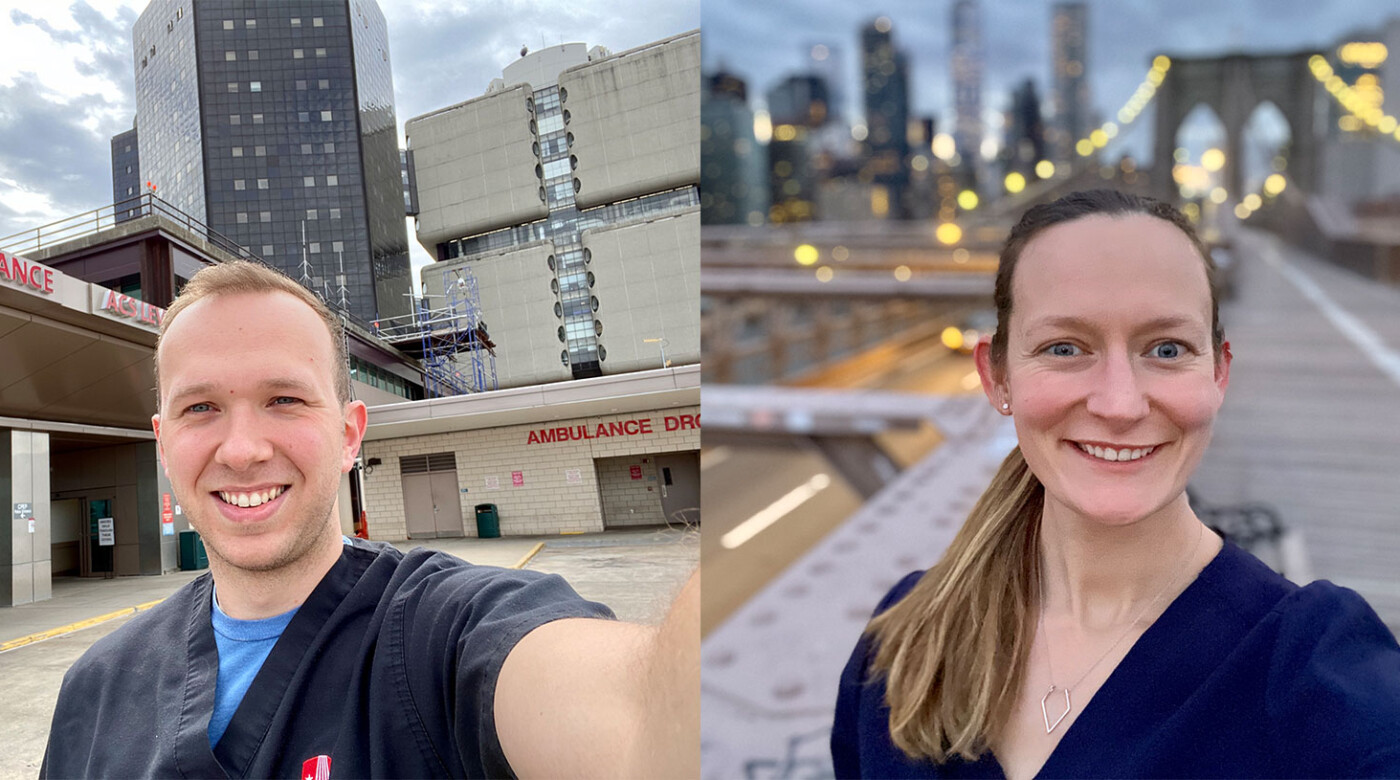 TACOMA, WASH. (April 14, 2020) — In a parking lot outside Stony Brook University Hospital, two tents allow physicians to triage up to 100 patients per day. They discern between the “worried well” and those showing more severe symptoms of cough, fever and low oxygen associated with COVID-19. Vital signs and chest X-rays are sometimes taken, and decisions made about further testing, medications and discharge.

One of the physicians making decisions — and working weeks that far exceed 40 hours — is Sean Boaglio ’13, the academic chief resident in the Emergency Medicine Department at Stony Brook University Hospital.

“Without the tents, the new patient influx would’ve broken the ER and congested waiting rooms,” Sean says. About 90 percent of patient visits are related to COVID-19. Sean’s face is often sore and marked. “It’s not meant to wear an N95 mask for 8 to 10 hours a day,” he says. But the personal protective equipment (PPE) is necessary. In essence, almost every patient is suspected of carrying the virus, even those visiting for other reasons.

Around 25 miles away, his wife, Chrissy Boaglio ‘14, works overtime as a Physician Assistant to help the surge in Long Island testing. Patients are swabbed, then sit in their car to await results of their COVID-19 test, which are delivered within about 15 minutes. She sees up to 70 patients per day, and about 80 percent come back positive.

Sometimes, that means relaying bad news. “A gentleman told me his 65-year-old father just died within a few days of contracting the virus,” Boaglio says. “He wanted to get tested because his wife was about to give birth and was concerned the same grave news will fall on him.” He was positive.

These Lute grads are on the front lines of the COVID-19 pandemic. At New York-Presbyterian Hospital, in Manhattan, Chrissy works full time for their OB/GYN department, where every admitted woman giving birth is tested for the virus. Six have tested positive for Coronavirus so far; two were completely asymptomatic.

Additionally, Chrissy has volunteered to help at a Long Island community hospital on the COVID-19 Emergency Response Team, who work per diem where there’s need, such as the emergency department, ICU or inpatient care.

Chrissy grew up on Vashon Island and played basketball at PLU — where she met Sean, who grew up in Longview.

Both majored in biology while at PLU, and Sean took a virology class that’s been popping up in his mind lately. After graduating from PLU, both went to Denver, where Sean attended medical school at Rocky Vista University College of Osteopathic Medicine and Chrissy received her Masters in Public Health from the University of Colorado. She and Sean then both went on to Stony Brook University, where he matched into his Emergency Medicine residency and she was accepted into their Physician Assistant program.

A common interest in disaster medicine and healthcare is powering them through the crisis. Chrissy learned about pandemics during her public health work, including taking a humanitarian relief class that had students running a theoretical earthquake triage with actors in a derelict building. Sean was certified in wilderness medicine.

“You can’t prepare really for a disease like this. It’s exciting and an honor to be a clinician at this time, but at the same time terrifying,” Chrissy says. “You can do all the studying you want, but it still wouldn’t prepare you for what we’ve been seeing here in New York.”

Neither Sean nor Chrissy have been tested and won’t be unless or until they show symptoms. Their friends, family and fellow Lutes send texts, emails and Facebook messages to check in, concerned about how the couple is holding up.

When Chrissy works, she now stays at a hotel that her hospital has contracted with for employees to use free of charge, as commuting isn’t an option. Chrissy and Sean live in Port Jefferson, New York, about an hour drive — without traffic — to Manhattan. Manhattan’s parking challenges means public transportation is preferable, but currently takes up to two and a half hours each way due to reduced commuter schedules.

When together, the couple share war stories of sorts­ — tales of what they saw or experienced at work, and provide each other a listening ear. It’s unnerving to watch patients rapidly decline, Sean says. Not just elderly people, but those his own age or a little older.

“We sign out of work, and they’re in stable condition and speaking in full sentences,” he says. “But a little miserable. A few hours later or overnight, they decline and need a ventilator or other aggressive interventions. Some go on to die.”

To alleviate the intense pressure of work, they enjoy exercising together, even if just in the living room. Chrissy also promotes getting away from technology, with phones often “exploding with emails” from work and news heavy with COVID-19 stories.

Turning away from technology and toward each other helps them see each other, and themselves, beyond their job titles and responsibilities. “It’s important to remember that we’re not just a doctor or physician assistant. Sean’s my husband and best friend, too. We take care of each other’s personal health, so when we can be fully tuned into our patients. So, we turn everything off for at least a few hours to have non-medical conversations or walk to the beach.” 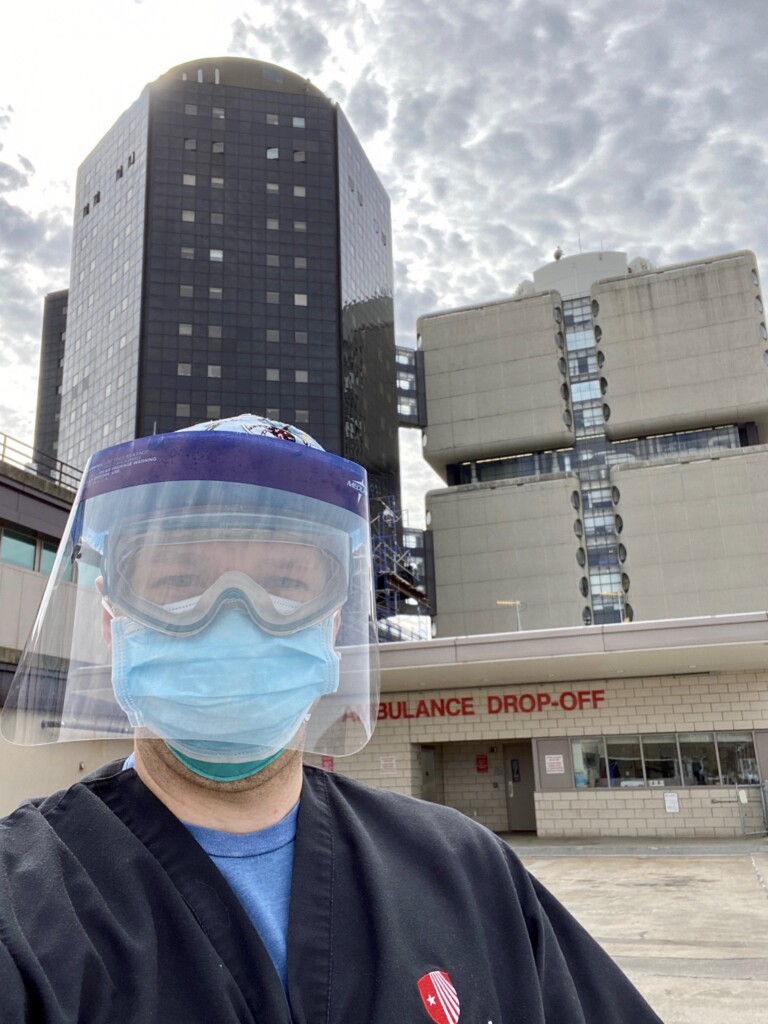 Sean Boaglio ’13, the academic chief resident in the Emergency Medicine Department at Stony Brook University Hospital, works to triage patients in large tents set up outside the hospital. 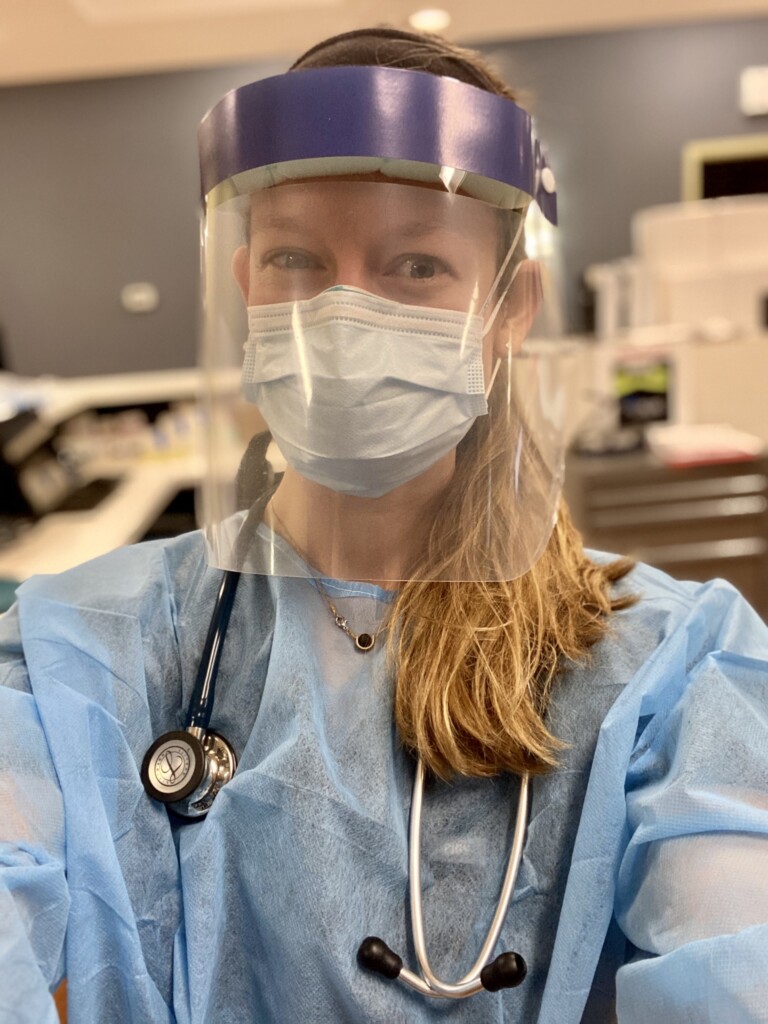 Chrissy Boaglio ‘14 works as a physician assistant to administer COVID-19 tests. Patients are swabbed, then sit in their car to await results of their test, which are delivered within about 15 minutes. She sees up to 70 patients per day, and about 80 percent come back positive.

After completing his time at Stony Brook, they’ll move to Nashville, where Sean’s fellowship in global emergency medicine will begin this summer at Vanderbilt University Medical Center.

Always seeking humanity’s goodness, Sean and Chrissy have been pleasantly surprised by the city’s response to the pandemic. The generosity and support of New Yorkers increased right alongside the numbers of COVID-19 cases.

“It’s cool to see people understand what we’re putting ourselves into. They can’t do much about the situation, but support us in it,” Chrissy says.

PLU’s culture taught and modeled how easy it can be to communicate on an individual level, she notes.

“In New York City, nobody really does that, everyone is so busy with their own personal interests, so patients take note to those who give the extra minute to just speak with them. They often guess we aren’t from here. PLU taught me this service culture, to always have a humanistic approach when speaking with people. You don’t get that at a big university and especially not in NYC,” Chrissy says.

The couple’s message? “We want to tell our Lutes to stay home, stay hopeful and stay healthy. We got this!”