On Exhibit: Veterans Day: A Salute to Service

On Exhibit: Veterans Day: A Salute to Service

veteran: vet-er-an (n) \ ˈve-tə-rən
a veteran – whether active duty, retired, discharged, or reserve – is someone who, at some point in their life wrote a blank check made payable to the United States of America for an amount “up to and including their life”
— https://www.plu.edu/military-affiliated-students/

On November 11, the United States celebrates Veterans Day, a day dedicated to honoring those who have served our country through military service. Veterans Day honors America’s veterans for their patriotism, love of country, and willingness to serve and sacrifice for the common good.

This exhibit illustrates the experiences of military veterans. It intends to share the diversity that veteran students, staff and faculty bring to Pacific Lutheran University.

The exhibit was created by PLU Vet Corps Navigator Kara Atkinson (PLU ’23) as a service project to reconnect the PLU community with veterans that they may see across campus.

In their own words

Veteran PLU students, staff and faculty were asked the following questions:
What does service mean to you?
Why did you volunteer to serve?
What is something that you as a veteran would like you fellow Lutes to know about the military?
What was your most memorable moment as a service member?

Below is a selection of responses from 18 current Lutes that have served in the military. 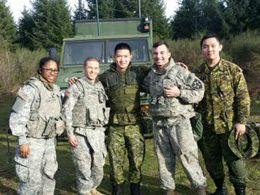 Chantelle is on the left

One of my most memorable moments was during the COVID-19 pandemic a couple of years ago. As a National Guard member, we had the opportunity to volunteer and assist in responding to COVID with things such as contact tracing, food banks, and vaccine distribution. I had the chance to work at a food bank and distribute food to families in need. Many families lost their jobs to the pandemic and couldn’t afford food. Seeing the smile on the children’s and parents’ faces solidified why I decided to join the military in the first place. I was able to serve and make a difference in the community firsthand. 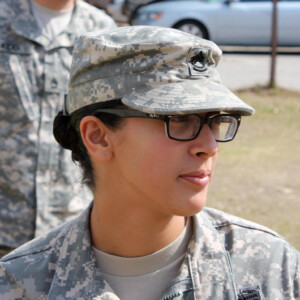 I volunteered to serve because of 9/11.
On September 11, 2001, I was attending high school in a city where many of the inhabitants commute into New York City for work, a beautiful city that looks right across the water into Manhattan. My dad worked in the city and the majority of girls attending this small, private school had at least one parent working in the city as well. I was standing by the window during the break period between classes, waiting to start History class (of all things), when my friend and I noticed a plane flying really low over our school. It was low enough that it was worth calling over some of the other girls to point out before our teacher called our attention to our assigned seats. Within 20-30 minutes of class starting, our headmistress came over the loudspeaker and asked all of the teachers to turn on the news in the classrooms, and we watched in horror as the events unfurled before our eyes. Most of us didn’t hear from our parents in the city for at least 48 hours, some of the girls never heard from their parents again. The sound of just over 200 girls, teachers, and nuns simultaneously screaming and crying still resonates in the back of my mind. The madness that ensued after 9/11 fueled my desire to serve and all of the people who gave their lives that day, they were the reason I volunteered. 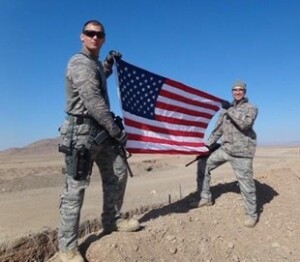 Ray is on the left

During military service there is an intimate bond built that someone who has not served will have a hard time understanding. This bond is built through teamwork, long hours, crappy assignments, complaining about everything together, and also enjoying the off time together. No matter someone’s background, culture, race, religion, or sex, the bond brings us all together. And humor is paramount to making it through all of the rough times. 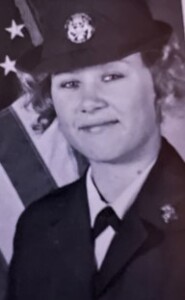 I personally believe that everyone should serve our nation in some way or another, whether it be military or some other type of service. There is something to be said for giving more of yourself to a higher cause and helping others. To me, service means giving of yourself. Giving your time, energy, and efforts to help others. 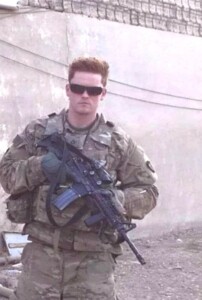 What I want everyone to know about service is that you learn the most about yourself when you’re sacrificing for more than your own well-being. The military isn’t for everyone, hell, maybe it wasn’t for me either. We can all live and die in our comfort zones, but where does that leave those in need and where does that leave the potential, better version of ourselves? 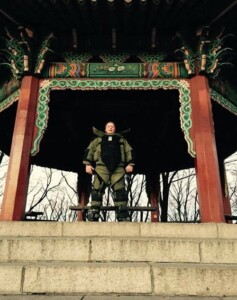 Service, to me, means giving of oneself beyond what could be self-promoting or gainful. To give back to the neighborhood, the town, the state or the country in which you’ve grown… or to give back to the people who’ve given to you along your journey. Out of all the possible drivers in life, doing for others is the most rewarding. Some of the most memorable moments of my time in service, were when people came together to ameliorate one another. Even when I left the military, I was pleased to see a commonality between all services, as we collectively embarked on the uncertainty that is civilian life. What a wonderful group of salty old souls we make. Walking into the unknown, on and off the battlefield, side-by-side. I volunteered to remove myself from a not so positive upbringing. I chose to make a 180 degree move as soon as I turned 18 and was able to make the decision for myself. It was one of the wisest decisions I have ever made; and I would make it again.

Books included in the exhibit