International sports will be on everyone’s mind as first the Winter Olympics wraps up in Vancouver BC next week, which will be followed a month later by the Paralympics in March.

Tucked in between these two events, PLU will host the 2010 Wang Center International Symposium on March 4 at the Greater Tacoma Convention Center and on the PLU campus. 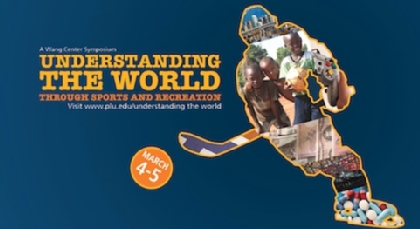 The event will feature numerous international thinkers on the global impact of sports and recreation, including Olympic gold medalist Joey Cheek, who has used the international stage to turn the world’s attention to the plight of the population of Darfur.

The event will feature numerous international thinkers on the global impact of sports and recreation, including Olympic gold medalist Joey Cheek, who has used the international stage to turn the world’s attention to the plight of the population of Darfur. Cheek will give the keynote speech at the Greater Tacoma Convention Center on March 4, the first day of the symposium.

In 2006, after winning gold in the 500 meter race and silver in the 1000 meter race at the Turin Olympics, Cheek donated his $40,000 in award money to Right to Play – an international aid organization focused on bringing the benefits of sport and play to the most disadvantaged children in the world. Cheek’s donation inspired his sponsors and other athletes to collectively donate more than $1 million to children in Darfur.

On the second day, other speakers will include PLU alums, such as Matt Kennedy, ’07, who had started soccer tournaments in a Ugandan slum, SeattlePI.com sports columnist Art Theil, ’75 and Jason Edward, ’84, ’89, who has summited Everest four times. Topics include the use of steroids, soccer in Seattle, sports and its effect on nationalism and identity in China, video gaming and marketing football to the world.

This will be the fourth such symposium hosted by PLU’s Wang Center for Global Education since 2003 – its reputation and reach continues to grow with each event.

“We want to be able to have broad conversations on global issues,” said Neal Sobania, executive director of the Wang Center for Global Education. “That is what the symposia have always been about – to get students to engage with the experts in the field.”

The overarching goal of PLU’s biennial international symposia is to stimulate serious thinking about contemporary issues and to provide a forum for the campus community and the broader Puget Sound community to engage individuals of international, national and local stature – from scholars and authors to business people and hands-on practitioners.

Sobania said the sports and recreation theme fits along these same lines as past symposiums – global themes that extend beyond a single country.