Blending history and heartbreaking family stories, award-winning historian Margaret D. Jacobs, the Chancellor’s Professor of History at the University of Nebraska-Lincoln, examines this phenomenon—and its global dimensions—in her latest book, A Generation Removed: The Fostering and Adoption of Indigenous Children in the Postwar World.

On Wednesday, Feb. 25, Jacobs will discuss her book, and her research, as the speaker for Pacific Lutheran University’s 41st Annual Walter C. Schnackenberg Memorial Lecture, part of PLU’s 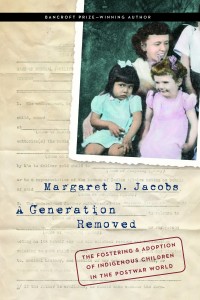 Spring Spotlight Series, “… and Justice for All?”

Jacobs’ presentation at PLU will recount both the trauma and resilience of indigenous women and families as they struggled to reclaim the care of their children, leading to the Indian Child Welfare Act in the United States and to national investigations, landmark apologies and redress in Australia and Canada.

“I first became interested in the widespread historical practice of Indigenous child removal when I carried out research in Australia in 1998, just a year after the Human Rights Commission issued its Bringing Them Home report,” Jacobs wrote in a post on the University of Nebraska Press blog. “The Commission had gathered deeply disturbing testimony from hundreds of Indigenous people—known as the Stolen Generations—who had been forcibly removed from their families to be raised in institutions or non-Indigenous homes. … I wondered if the United States had its own Stolen Generations. Had authorities forcibly removed American Indian children just as they had Aboriginal and Torres Strait Islander children in Australia?”

They had. In its review of A Generation Removed, which it called a “nuanced, scholarly work … that calls for ‘a full historical reckoning’ of this devastating chapter in the treatment of Native Americans,” Kirkus Reviews said: “With no evidence of neglect required, the children were institutionalized, fostered or adopted in non-Indian homes. Officials claimed to be acting in ‘the best interests of the child,’ while critics charged that social workers and court officials were using ‘ethnocentric and middle-class criteria’ to remove children unnecessarily. In fact, writes the author, the removals were acts of cost-cutting disguised as caring: Neither federal nor state governments had to fund the care of American Indian children once private families adopted them.”

Jacobs’ 10-year, two-continent research project into the topic resulted first in the publication of the Bancroft Prize-winning White Mother to a Dark Race: Settler Colonialism, Maternalism, and the Removal of Indigenous Children in the American West and Australia, 1880-1940 and, now, after five more years of research, A Generation Removed.

“In this new book, I wanted to expand my focus into Canada as well, where generations of Indigenous children also experienced involuntary separation from their families,” Jacobs wrote. “In the last part of A Generation Removed, I ponder why Australia and Canada have had searching national debates about the forced removal of Indigenous children but the United States has not.”

Jacobs specifically cites the 2013 U.S. Supreme Court case Adoptive Couple vs. Baby Girl, which pitted adoptive parents Matt and Melanie Capobianco against baby Veronica’s biological father, Dusten Brown, a citizen of the Cherokee Nation of Oklahoma. Veronica’s biological mother had relinquished her for adoption to the Capobiancos without Brown’s consent. Although Brown regained custody of his daughter using the Indian Child Welfare Act (ICWA) of 1978, the Supreme Court ruled in favor of the Capobiancos, rejecting the purpose of the ICWA and ignoring the long history of removing Indigenous children from their families.

Washington state figures prominently in the book, too, Jacobs said, with a focus on many local Indigenous female activists who are working to address the high numbers of indigenous children in the child-welfare system.

The topic is a natural fit for PLU—even beyond the Spring Spotlight Series theme. PLU Benson Family Chair in History and Professor of History E. Wayne Carp is a noted historian of adoption and residents in the area whose lives were affected by post-WWII adoption practices pertinent to indigenous children, and Jacobs’ lecture also ties in with the 2015 Powell-Heller Conference for Holocaust Education, held on campus March 4-6, whose topic is “Children’s Voices.”

About the Schnackenberg Lecture

Dr. Walter C. Schnackenberg (1917-73) graduated from Pacific Lutheran College in 1937 and taught at PLU from 1942 until 1944. He returned to Pacific Lutheran University in 1952 as Associate Professor of History and Political Science and became Professor of History in 1958. He was chairman of the Department of History from 1963 until 1973 and served as faculty representative to the Board of Regents during the 1972-73 academic year. He was author of The Lamp and the Cross: Sagas of Pacific Lutheran University from 1890 to 1965 (1965) and Now or Never: Reflections of the Fullness of Time (1957) and contributed numerous articles to historical and religious journals.

One of Dr. Schnackenberg’s most frequently expressed wishes was that Pacific Lutheran University might establish a lectureship that would, on a regular basis, bring to the campus distinguished members of the world academic community to discuss significant topics of historical interest. Accordingly, the Department of History and the Schnackenberg family announced on Feb. 8, 1974, the creation of the Walter C. Schnackenberg Memorial Lecture, inaugurated during the 1974-75 academic year.