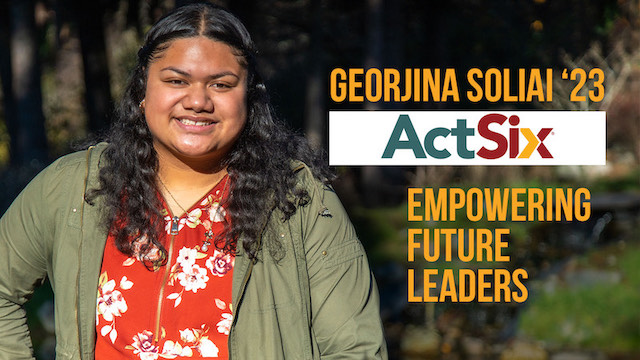 As a first-generation college student, Georjina Soliai ’23 of Lakewood, Washington wasn’t certain how she would be able to afford college. While going through the college admissions process she learned about the Act Six Scholarship. Act Six is a leadership program that connects local community affiliates with faith- and social justice-based colleges to equip emerging urban and community leaders to engage the college campus and their communities at home. PLU is one of just five Act Six affiliated universities.

Before her freshman year began in 2019, Soliai was able to meet with other Act Six Scholars for training. Soliai credits this time in helping her cement her decision in pursuing social work. She was hesitant to choose that as her major because of the workload. But other Act Six students stepped in and encouraged her by sharing their own stories of being part of the program. The support offered by Act Six helped Soliai navigate those first months of school.

“I think it definitely had a really big impact on my transition,” Soliai said. “Coming into college, unless you have friends going with you, you don’t really know much. Coming in new and having the Act Six group take you under their wing —they were like your big buddy and It was nice to have a set community that you automatically belonged to.”