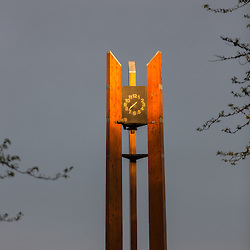 PLU seeks to educate students for lives of thoughtful inquiry, service, leadership and care—for other people, for their communities, and for the earth.

The Faculty of Pacific Lutheran University establishes the educational philosophy that shapes and supports the curriculum and programs of study. This philosophy is reflected in statements of educational goals, objectives, and principles. Of particular significance to all students are statements about learning objectives, general education, and writing throughout the curriculum.

Pacific Lutheran University was founded in Tacoma by Norwegian pioneers in 1890, who were led by the Reverend Bjug Harstad, PLU’s first president. In naming the University, these pioneers recognized the important role that a Lutheran educational institution on the West Coast of America could play in the emerging future of the region. They especially wanted the institution to educate immigrants, but they also wanted it to produce graduates who would serve and lead in their communities. Education—and educating for service—is a venerated part of the Scandinavian traditions from which these pioneers came.

The institution granted its first bachelor’s degrees in 1898, and then served as an academy until 1918. After two years of reorganization, it became Pacific Lutheran College in 1920, offering a two-year junior college program. PLC merged with Everett’s Columbia College in 1920 and Spokane College in 1929. In the 1930s, PLC resumed the four-year program, granting baccalaureate degrees in education in 1939 and in the liberal arts in 1942. Graduate degree programs were added in the 1950s, beginning with Nursing. The institution resumed the name Pacific Lutheran University in 1960.

PLU is affiliated with the Evangelical Lutheran Church in America (ELCA) and is sponsored by the more than five hundred congregations of the Pacific Northwest Region 1 of the ELCA. The University welcomes students from all races, religions, ethnic groups, nationalities, sexual orientation, and heritages in order to create a rich and rewarding interpersonal campus environment. PLU includes the College of Arts and Sciences as well as professional schools of Arts and Communication, Business, Education and Kinesiology, and Nursing. Undergraduate students may choose from a variety of majors and minors, and graduate degrees are offered in business administration, creative writing, education, finance, marketing research, marriage and family therapy, and nursing.