Today we are here to celebrate and honor, to commemorate the dead and the living, the men and women who, in every war since this country began, have demonstrated loyalty to their country and great courage.

In a world tormented by tension and the possibilities of conflict, we meet in quiet commemoration of an historic day of peace.  We join together to honor those who made – and make, to this day – our freedom possible. The resolution of Congress which first proclaimed Armistice Day, described November 11, 1918 as the end of “the most destructive, sanguinary and far-reaching war in the history of human annals.” That resolution expressed the hope that the First World War would be the war to end all wars. It suggested that those soldiers who had died had therefore not given their lives in vain.

It is a tragic fact that these hopes have not been fulfilled, that wars still more destructive have followed; that man’s capacity to devise new ways of killing his fellow man seem to outstrip his capacity to live in peace with all humankind.

Some naysayers might say, then, that this day has lost its meaning, that the shadow of new and deadly weapons and adversaries have robbed this day of its great value, that whatever name we now give this day, whatever flags we fly or prayers we utter, it is too late to honor those who died before, and too soon to promise the living an end to organized death. But let us not forget that November 11, 1918, signified a beginning, as well as an end. “The purpose of all war,” said St. Augustine, “is peace.” The First World War produced man’s first great effort in recent times to solve, by international cooperation, the problems of war. That experiment continues in our present day – still imperfect, still short of its ultimate goal, but it does offer a hope that some day nations can live in harmony. 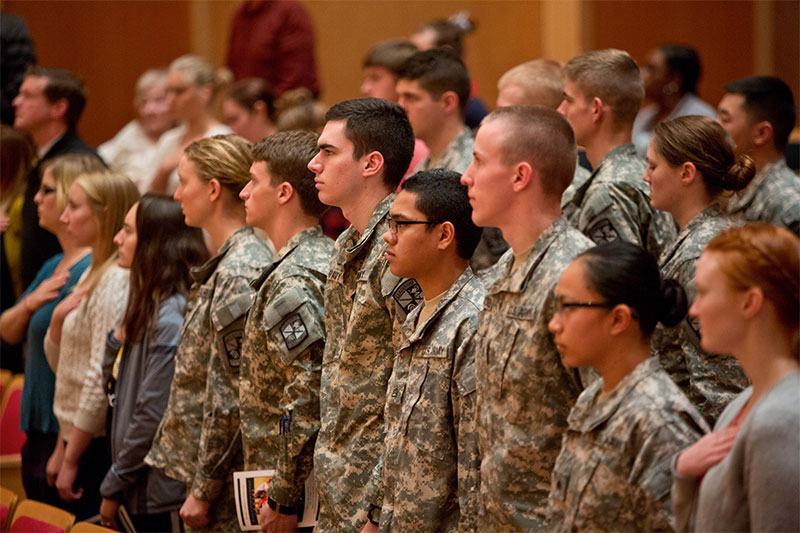 The date of Veterans Day has some personal resonance for me, because both of my grandfathers were in uniform on that day, November 11th, 1918, and they both expressed their joy at hearing the news of the armistice.  In fact, members of my family have been in uniform for every American war except for the Spanish-American War.  I keep a small framed photograph of my father as a boy sitting in a group including his great uncle who lost an arm fighting for the Union at Vicksburg.  My dad, who was himself a veteran of World War II, Korea, and Vietnam, liked the fact that he had shaken hands with his great uncle Edward Morley, who had himself shaken hands with his grandfather, Capt. Thomas Askey, who had served in the American Revolution.  Askey was my great-great-great-great-great-great-great-grandfather and I was named Thomas in his honor.  I’m sure many of you here have stories of these kinds of family service connections through the years.  And Veterans Day is a great occasion to remember all those who have served our country.

For our part, we shall continue to deepen students’ understanding of the central issues and theories regarding peace building and conflict.  We will endeavor to instill in students the patience and understanding necessary to work with allies of diverse interests to find common goals, and the resolve to courageously defend the right of freedom, safety and dignity for all people.

Today, out of all days, I hope that each of you can put aside your own personal strife and take time to remember those who are too often out of sight, out of mind: our brave military members who have put service before self.  By being here today and taking time to reflect on the service and sacrifice of veterans, you demonstrate that you understand – whether through your own service or through the service of others – the truth veterans know all too well: no one leaves the military unchanged. Ceremonies are important but our gratitude has to be shared more than just once a year.  We honor these men and women most by ensuring that they are openly welcomed and given the support and opportunities they have so richly earned, and by living in peace with one another.