Historian Philip Nordquist reports that the first faculty member hired in 1892, as the fledgling academy was preparing to open its doors, was a music teacher, “the energetic musician Carlo Sperati.” Music has continued to be at the center of campus life since that time.

The University Symphony Orchestra has long been one of the most important centerpieces of a stunningly rich musical calendar. Unique among the musical ensembles on campus, the orchestra plays a role in every aspect of musical and ceremonial life at the university. 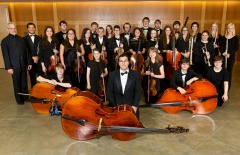 The Norwegian word for ``chamber musicians``

Pacific Lutheran University’s KammerMusikeren is a small ensemble that offers members of the University Symphony Orchestra the opportunity to perform with a chamber-size orchestra.