In an index developed at the Brookings Institution, The New York Times ranks PLU in top 10 of “value added colleges regardless of major” in this piece by James B. Stewart: http://nyti.ms/1FMW7q1

One important thing to note here is that two of the schools named in Stewart’s article are ELCA institutions and three are New American Colleges and Universities. Take a look at the letter to The New York Times below from the President of Manhattan College (a fellow NAC&U school) which will carry my signature and the signature of the President of Wagner (both an ELCA and NAC&U school, like PLU):

In “College Rankings Fail to Measure the Influence of the Institution” (October 2, 2015), James B. Stewart ends with a list of 10 schools that emerge as leaders in adding value regardless of the major of graduates, based on a formula developed by the Brookings Institution. Half of the colleges listed, including those we lead, are examples of a kind of school often overlooked by commentators on higher education.   Known variously as “Master’s universities” or “comprehensive universities,” these institutions are neither research universities nor liberal arts colleges, but a hybrid that combines the best of both, integrating liberal arts education with professional preparation.  Ernest Boyer described them thirty years ago as colleges that “colored outside the lines,” labeled them “New American Colleges,” and predicted a bright future for them.   The emergence of  New American Colleges and Universities as high achievers in rankings based on  “added value” suggests that Boyer was right. 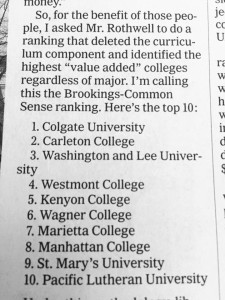