The tattooed numbers on her arm are a constant reminder of a time when the best and worst of human nature were in conflict. Harry Heller tells the story.

Harry’s mother, Georgette Heller, was only 15 years old when she was separated from her family and sent into hiding with a non-Jewish family in Brussels. She did not go outside for two years – no sunshine, no friends, no freedom. There came a point when she could not take it anymore, and she started sneaking out at night. She got caught, and was turned over to the Nazis.  She was immediately put on a train to Auschwitz. The year was 1944.

When she got off the train, a Jewish woman from her hometown recognized her, and got her the job that would ultimately help save her life. Her job was to collect the clothes of those being taken into the gas chambers. Day in and day out, Georgette sorted the clothes of innocent people being herded to their deaths. The death marches started in late 1944 and into 1945. It was one of the worst winters in Europe. Harry’s mother, along with tens of thousands of other prisoners were forced to march for 35 miles in the snow and bitter cold, with little or no food, water, or rest. Those who could not keep up were shot. About one in four died on the way. Georgette survived. 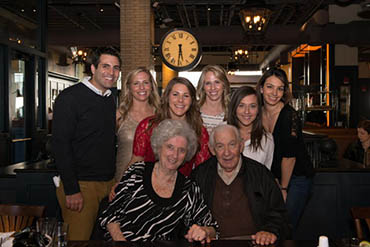 Harry’s father, John, is also a story of survival.  He was only 13 years old when he witnessed his father’s shop destroyed by SS soldiers in an incident known as “Kristallnacht.” In one night, Nazis in Germany torched synagogues, vandalized Jewish homes, schools and businesses and killed close to 100 Jews and sent some 30,000 Jewish men to Nazi concentration camps. The press covered the event, the news went out worldwide, but no one responded.

John can still recall when they received a letter saying that they had six-weeks to leave Germany or they would be put into a work camp. There was a three-year waiting list to come to the United States so they had no choice but to hire a smuggler to get them out of the country. The smuggler took their money, but left them in the middle of the woods where they were found by the Nazis in the early morning. Despite this, they kept running from the Germans. When hiding in the Belgian Forest, the church took them in and they were hidden behind a fake wall every day, except Sundays. On Sundays, Harry Heller’s father and grandfather attended church; his father dressed as an altar boy and his grandfather as a priest.  While in hiding, John Heller was asked to join the Belgium resistance. To this day, John recalls helping American soldiers find their way through the forest, during the pivotal Battle of the Bulge.

Georgette and John Heller, both survivors, found each other, after the liberation in late 1945.  They were married in 1948. They came to the United States to start a new life. They settled down in New York, which is where Harry Heller and his brother were born and raised. Now almost 60 years later, there is much to celebrate in the faces of their six grandchildren. There is also still darkness in the memories of the past.

Harry and Carol Heller share a common devotion to making sure others learn from their parents’ story of survival – a past Harry’s parents will never forget.  In a heartfelt keynote speech several years ago, Harry Heller said this, “The numbers tattooed on my mother’s arm are a constant reminder to my family and to the people she meets of what happened to her.  Unfortunately, antisemitism still exists around this country. Hopefully, through efforts likes those at PLU, we can avoid the horrors of the past.”

Harry and Carol are grateful to those that are supporting Holocaust education at PLU and the annual Powell-Heller Conference for Holocaust Education.