Emmy Strauss, called the “Bouquetche” (little bouquet), was the daughter of Gerson Strauss and his wife Clementine, née Gernsheimer, who ran a butcher shop at Betzelsgasse 8. Emmy attended the Upper Girls’ School from 1913-1921.

In 1928 she married textiles wholesaler Joseph Mayer (Familie Mayer & Co., Gärtnergasse). Due to the growing pressure of discrimination and persecution in National Socialist Germany, the company had to be given up in 1934.

Sometime around 1937/1938 the family moved to Wiesbaden for security reasons. There Emmy managed to complete training as a cosmetician. In 1939 came their “emigration” to the US. Up to that point her young son Kurt had attended no fewer than three Jewish schools. In the US Emmy Mayer had considerable success with a cosmetics company under the name “Emmy Bouquet” [playing on her maiden name of Strauss]. Her son was able to continue his mother’s success with his own business successes. Joseph Mayer worked during the war as a welder in a shipyard.

Emmy gave up the thought of returning to live in her birthplace of Mainz when she learned that her sister, Hermine Wertheimer, and her mother, were deported in 1942 and murdered in Sobibor and Belzec. Still, the headstone for Emmy and Joseph Mayer includes the following line: “Born in Mainz am Rhein.” 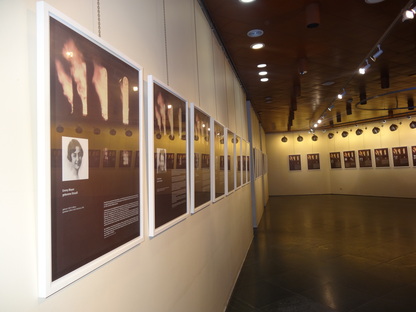 The exhibit of women in the Holocaust in Mainz, Germany. A picture of Emmy Mayer is to the far left.